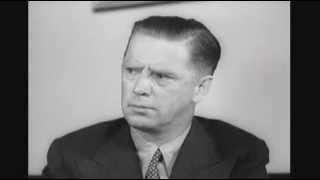 You know, I gather from some comments on this blog and a big spike in readership about a week ago that HuffingtonPost and Reddit must have briefly featured more prominently their old links to my comments on C-SPAN2 about Helen Rittelmeyer.  I’ll just refer anyone inquiring in the future to this entry.

Long story short: she had a disturbingly dark philosophy and m.o.; I criticized it; it was nearly two years ago now; she’s reportedly striving to be a bit more mature and moderate; she moved out of the country last I knew; and – this is the part that really benefits you, the reader – we buried the hatchet just deeply enough before she did so for me to inherit about eight old books from her continually-expanding personal library. 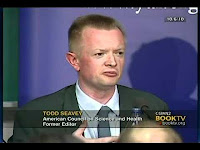 Indeed, this blog’s current “Month of Partisanship” and impending “Month of Reform” are mostly the result of me finally getting around to the reading material thereby acquired, and lumping the books into those two categories is not only a good way to sort the books but, as a bonus, not a bad way to sum up the unusual poles that sort-of substituted for good and evil in her cosmology, for anyone desperate to understand (and stymied by the closing down of her blog and my desire not to go on about it further): fighting good, Kumbayah harmony bad/lame, nearly the opposite of how most people see these things.

And, yes, in retrospect, it therefore all had to end in some sort of big bout – should have, even.  But enough about that, obviously.  On to the books, about one per week (and since – I swear – I prefer harmony to combat, the “Month of Reform” will peak with the Sept. 17, 8pm, Occupy/Tea summit I’m hosting at Muchmore’s, to resolve the dialectic once and for all and create peace in our time).

Westbrook Pegler, who would have been 118 today (and no doubt very world-weary), was a pugnacious mid-century columnist best known for being anti-communist – and most recently rescued from complete obscurity by critics shocked at Sarah Palin for quoting him.  Given all the stand-up-comedy/Tourette’s-level invective he hurled against everyone from Stalin to Frank Sinatra to Jews, it’s dangerous to give him anything like a full endorsement, but, like H.L. Mencken, he’s at times so brilliant we have to give him some sort of pass or at least enjoy all the anecdotes he caused.

And like Mencken, he’s usually right, as made clear by Oliver Pilat’s highly entertaining 1963 biography, Pegler: Angry Man of the Press.  You have to suspect that much of mid-century politics and letters is best explained by the existence of ornery drinkers.

But Pegler’s journalistic career really began earlier – at the 1912 Republican convention, one hundred years ago this summer, as it happens.  As I’ve noted before, that convention was in some sense the opposite of this month’s impending 2012 GOP event in Florida, where the one likely chance for excitement is the prospect of the disappointed Ron Paul fans doing something disruptive (though at this point, I think they should all be working on the Gary Johnson campaign, unless Romney’s making Rand Paul his v.p. or something).

By contrast, it was the Progressives who bolted, disgruntled, in 1912, with Teddy Roosevelt’s forces marching into the big-government future and leaving behind a hapless (but more libertarian) President Taft and the Republican Party.  It was a time, Pilat says, when “One per cent of the population had more money than the remaining 99 per cent.”

He got it from his dad, Arthur Pegler, a journalist who was so aggressive in pursuit of good stories that once when he arrived too late to cover a riot, he reportedly set off a pile of firecrackers under the window of the mayor of Rock Island, Illinois so that he could fake a story about an assassination attempt.  We rightly criticize today’s press, but, well, by comparison...

Arthur would delight his son Westbrook and the rest of the family with strange, sometimes exaggerated tales from his adventures as a reporter.  He recounted going to look at a body in a coffin only to have the man wake up and lament that his wife had repeatedly jumped the gun and attempted to bury him for dead.  The non-corpse and Arthur shared a drink.  After Arthur recounted that story to his children later, his face grew grim and, according to Pilat, he warned them, “In the name of God, boys, do anything else but don’t be a newspaperman!”

In one case, Arthur may have inadvertently framed a woman for murder, since he lamented to his photographer that there was no clinching evidence
that the woman, then on trial as a poisoner and much criticized in the paper for which Arthur wrote, possessed arsenic, the means by which her husband died.  Arsenic taken from photography supplies was promptly found in her basement, and Arthur and his colleagues became so concerned that his photographer had planted the evidence himself that the newspaper – without admitting culpability – reversed course and led a crusade to show the woman leniency.  Her sentence was commuted to life in prison.

Pilat notes that Arthur Pegler eventually tired of the sensationalism he helped create in the Hearst-era press, likening the tone to a “screaming woman running down the road with her throat cut.”  Pilat observes that this metaphor would not have been sensational enough for use by the Hearst papers “since it failed to specify whether the woman was disheveled, partially disrobed, or naked.”

Decades later, when son Westbrook Pegler and several other critics greatly angered President Truman by insulting his daughter’s singing skills, leading Truman to write a surprisingly intemperate and personal letter to the editor in her defense, some involved in the conflict released statements in which they took great pains to smooth things over with the President.  Pegler instead read a statement to reporters that said, “It is a great tragedy in this awful hour that the people of the U.S. must accept in lieu of leadership the nasty malice of a President whom Bernard Baruch, in a similar statement, called a rude, uncouth, ignorant man.”

As Pilat relates, from its earliest days, Pegler’s newspaper column

abounded in exploding paper-bag phrases like “blood-thirsty bull twirp” for A.A. Berle, Jr., an Assistant Secretary of State, “China Boy” and “pi-yu” for Henry Luce, the Far Eastern-oriented publisher, and “little padrone of the Bolsheviki” for Fiorello H. LaGuardia...Pegler would call Elsa Maxwell “a professional magpie,” and she would shoot back that he was a “duck-billed platypus”...Or he would dismiss J. Edgar Hoover as a “night-club fly-cop,” and the FBI chief would reply that his critic suffered from “mental halitosis.”

Nowadays, you have to be pretty well removed from “respectable” circles to get away with that – a blogger or Fox commentator, that sort of thing.  Those were the days.

Pegler would careen through numerous such feuds over the decades, with excursions into Cold War political philosophizing and brief bouts of conspiracy theory, delighting even those readers who disagreed with him, simply because they were eager to see what boxing-like conflict he would stir up next.  His rhetorical flights of fancy veered into outright libel at times – although, somewhat like Ann Coulter today, it was all muddied by the ambiguity about when he was serious and when he was deploying a joking metaphor, possibly one that implied his target was a criminal or even descended from a long line of criminals or mental defectives.  (He was a bit like a working man’s Gore Vidal in this way, you might say.)

If there is life and spirit left in us, we have to hope this level of fun can be recaptured without sacrificing the facts.  Yet I try to be nice.

(In other historically-pugnacious news, I see that on Tuesday night next week, a group called the Society for the Advancement of Social Studies – SASS – is throwing a party/talks on the theme of “Historical Badasses,” including Genghis Khan and the Vikings.  I may have to attend, as long as I’m out of there in time to see present-day badasses Jezzy and the Belles perform at Bowery Electric at 9:45.)
Posted by Todd Seavey at 8:21 PM

This is about the whole Helen/you thing but you've managed to make it totally impossible to read. Huh? You truly suck.

"rydedth" - what you remember doing likely, you dumb fuck.