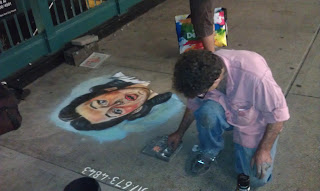 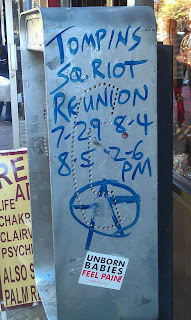 1. Nearby, four hip images with quasi-libertarian implications, all photos by me except for the Constitution tattoo (and below: a link to my appearance on the comparably hip show Rew and Who?):

•the Constitution on a back (from the Facebook page of a woman, not necessarily the one possessing the tattoo, who appears to be both a Ron Paul activist and an Occupy employee – exactly the sort of person who needs to attend my Sept. 17 Dionysium at Muchmore’s, a “summit” for both Occupants and Tea Partiers to learn from each other)

•a photo from a Foundation for Economic Education event of one of several tattoos I’ve now seen among libertarians of a cuneiform word for “liberty” (though its meaning is admittedly complicated somewhat by its “freedom from both slavers and creditors” implications, as Occupy-affiliated anthropologist David Graeber knows)

•a sidewalk chalk artist who, on other occasions, has drawn figures including libertarians such as Hayek on sidewalks near Columbia (I gave him ten bucks)

•a payphone with both a misspelled anarchist announcement and a pro-life sticker on it and an ad for a “psychic” in the background – not far, fittingly, from the McDonald’s that had an Anarchy “A” symbol on its garbage can for a while, the Immaculate Conception Catholic Church, and the rockabilly- and punk-friendly bar Otto’s Shrunken Head, where...

2. ...I taped this appearance yesterday on Rew and Who?, giving a brief explanation of libertarianism to the hipsters and musicians.

Lovely host Rew Asterik noted, as it happens, that Pete Seeger, the folk musician discussed at our most recent Dionysium, ended up getting her fired from a teaching gig because she taught the kids the Seeger song “Where Have All the Flowers Gone?” and a line asking “Where have all the husbands gone?” was seen as offensive – offensively conservative, presumably, given her urban, non-white audience.  Pete Seeger: too right-wing for NYC.

3. Speaking of radicalism, I was pleased by the sheer multi-level right-wingery last night of Rand Paul, in his GOP convention speech, mentioning an anecdote about Ronald Reagan that’d been reported by Paul Kengor (the author of the book The Communist, about which I blogged last month).

Rand Paul gives me some hope for 2016 and the future of the GOP (after I vote for Libertarian Gary Johnson in November, no matter how smoothly Romney’s speech tonight goes).  Rand Paul’s not perfect, though – so hard to keep everyone happy – and yesterday I had not only my hardcore anarcho-capitalist pals but leftist Daniel Radosh complaining about him online, the former usually over Rand’s endorsement of (necessarily trade-stymieing) sanctions on Iran, the latter for Rand’s endorsement of the Keystone XL oil pipeline – something that the anarcho-capitalists, too, joined in criticizing, since it makes some use of eminent domain.

I will only say that even if you agree with libertarian Richard Epstein that eminent domain for truly general-welfare purposes such as roads is acceptable (with compensation to the displaced, always) but that takings merely for the purpose of giving property to new private owners are pure theft, something like a pipeline still presents a sort of grey area (or would that be halfway between a grey area and a black area – dark grey area?) in that while undeniably enriching private owners (and customers), it does involve the sort of massively-multi-party coordination hurdles that for most people serve as an indicator something warrants public-sector involvement.

I (unlike Rand Paul) am anarcho-capitalist enough to concede that ideally everything should be done with no government involvement or private property seizure at all, though.  Massive contracts that only go into effect if every party agrees to a single compensation schedule can be proposed for projects.  When they fail, humanity can – and will – discover other means.

Rand Paul can spend the next four years refining his views on all this while Gary Johnson is president, though.

4. One of the many offensive-but-meaningless items in the GOP platform is an affirmation of the importance of NASA, explicitly assumed to be a government program – with the platform explicitly calling for rethinking the agency instead of “merely” downsizing government, reports the Space Frontier Foundation.

5. Pretty much anything the right does, statist or anti-statist, drives the left totally bonkers lately, though, as this embarrassing wish-fulfillment scene from ham-fisted propagandist Aaron Sorkin’s Newsroom reminds us.  Presumably, this is what the left thinks all news broadcasts should sound like, since MSNBC isn’t wish-fulfilling enough.

You know, I have a notorious ex who tried to convince me I needed to learn from Sorkin how to be witty.  I haven’t put that on the schedule just yet.  Nor the DVR.

6. The left isn’t far removed from sounding like that Sorkin scene already, of course.  Driven into one of her routine hate-frenzies of colorful, shallow language by Paul Ryan, the unfunny Maureen Dowd recently wrote:

[Paul Ryan] may look young and hip and new generation, with his iPod full of heavy metal jams and his cute kids. But he’s just a fresh face on a Taliban creed – the evermore antediluvian, anti-women, anti-immigrant, anti-gay conservative core. Amiable in khakis and polo shirts, Ryan is the perfect modern leader to rally medieval Republicans who believe that Adam and Eve cavorted with dinosaurs.

7. Even crazier (likely because it was written by a more Gen X-aged and thus farther-degenerated female leftist) was the recent Ann Friedman piece protractedly likening Ryan to a bad libertarian (specifically Ayn Rand Objectivist) ex-boyfriend whom one suspects is not imaginary, though the line between imagination and reality seems to get blurrier with each new column from an angry female leftist writer.

I don’t think the liberal she-hate is leading anywhere productive for any faction, but it is certainly tempting to encourage them to just let it all out so they get tired and fall asleep.

9. I do not a for a moment pretend that Paul Ryan can be a full-fledged Catholic and a full-fledged Objectivist at the same time, but, whatever one might think of him, it should be no shock that people often have multiple influences.

Amusingly, Ryan is a bit like a living embodiment of the group I spoke to about Rand two years ago, the Objectivist Study Group at Yale (OSGAY), since that group prides itself on sometimes turning Objectivists into Catholics.  Subversion or fusionism?  Both have their uses.

10. And diversity is a good thing even in a sect as tiny as libertarianism (and, more broadly, quasi-libertarianism).  So I’m happy to have Ryan display some Rand influences while the other Rand influences the GOP even as Gary Johnson bolts it and provides me with someone to vote for this year.  Soon, if all goes well, we’ll have the enemy – the inhuman practice of governing, no matter who does it – surrounded.
Posted by Todd Seavey at 6:01 PM

"I will only say that even if you agree with libertarian Richard Epstein that eminent domain for truly general-welfare purposes such as roads is acceptable..."

And if I don't? Then I'm just fine being consistent in my observation that eminent domain is simply a very specific form of taxation, and is therefore theft.

The fact that the non-aggression principle makes some ideas harder to implement is not a good argument for the use of violence. In fact, its the same argument used by a serial rapist.