BOOK NOTE: “The Moviegoer” by Walker Percy (and Catholics in general) 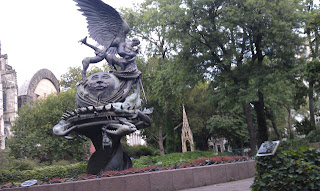 Instead of Ten Commandments, I give you these ten religion-related items (including a look at the fine novel The Moviegoer), fitting for today’s Feast of the Assumption (humanity’s most dubious assumption, of course, being that there is a God).

I. For starters, above, in a picture I took outside NYC’s St. John the Divine Episcopal Cathedral recently, is my favorite deranged sculpture, which looks like a schizophrenic eight year-old concocted it but is instead a depiction of life itself battling evil – life in the form of a giant crab, sitting atop a DNA helix made of ocean water, holding the severed head of Satan in its claw while giraffes walk on its shell.

Call me a secularist, but I think the Lego safari at the Bronx Zoo, now in its final days on display, makes more sense.

Speaking of animals, I didn’t see flying squirrels in the shrubs on my recent visit to the parents in Connecticut, by the way, but I got to hear about my parents’ Scottie, Mac, showing the uncanny ability to sense the movement of a mole underground from several yards away – and dig fast enough to catch the mole.  My parents stopped Mac from killing the mole and let it get away, but they let him briefly catch it first because, they said, it was his birthday.

II. Paul Ryan has only himself to blame if he gets criticized for being both an Objectivist and a Catholic, but I’m looking forward to the press trying to do both those things at the same time.  I mean, if they really want to force America to choose between the two, I suppose we can, or maybe alternate.

III. But what about the tougher choice between Jesus and Batman? (h/t Jesse Gilchrist Forgione, who attended the last Dionysium, a debate on the relative strengths of Batman and Spider-Man – not to be confused with this month’s, August 27 at Muchmore’s, on Pete Seeger and Communism)

IV. Religion is relatively harmless when it has no power to wield physical force – then it’s just a stupid idea you can ignore – but with the Russian Orthodox Church helping to prop up the gangster Putin in Russia, they might at least tolerate literally one minute of spontaneous protest punk-singing on church premises, like that which has put the Russian band Pussy Riot on trial for “hooliganism.”

Since they cannot, I will join crowds protesting at both the St. Nicholas Russian Orthodox Church and the Russian consulate on Friday (at 9am and 10am, respectively, both in the East 90s).  Those gatherings will be followed by a 1pm Times Square rally (46th and Broadway).  Before all that, there will be a Thursday 7:30pm reading of court testimony at Liberty Hall at Ace Hotel.

V. Even though it was almost two years ago that I sparred with an ex on C-SPAN2, I’ve recently gotten calls from both ABC and CBS about
them toying with the idea of follow-up stories (most TV and film ideas do not come to fruition, but I’ll let you know if anything comes of it).  In the meantime, I’m impressed that a staffer at the physical therapy place I briefly went to for a spontaneously-screwy shoulder spotted the episode of Big Bang Theory containing a scene likely inspired by the incident even though he’d never actually watched the original C-SPAN2 incident.  That seems like some kind of evidence for the C-SPAN2 --> Big Bang Theory theory.

In any case, as noted before, despite all that, I owe said ex for the books blogged about in this “Month of Partisanship” and in September’s “Month of Reform,” and that brings us (after many delays) to Walker Percy’s much-lauded early-60s novel, The Moviegoer.  Percy was Catholic, and I gather many of his co-religionists admire the novel’s subtle depiction of a man depressed by his war experiences and a shallow, materialistic existence (“We part laughing and dead”), a man being pulled ever so gently toward faith.

Yet I can’t help thinking that the book’s relatively-happy resolution ought to be almost as disquieting as the faithless meandering and promiscuity that precedes it.  In fact, one of the things that makes the book seem realistic is that there is no big moment of transformation – and no immense outpouring of joy – once our protagonist and his mentally ill sometime-girlfriend quietly turn churchward (prior to which, her manic rant about having her whole life transformed by a glance at a bookshelf makes for one of the most convincing and subtle depictions of mundane, everyday lunacy I’ve seen in a novel, and there is no pretense that she will ever be fully well, with or without help from her new invisible omnipotent friend – only the hope, made quite explicit, that she’ll now have someone to tell her what to do).

They just fall into a more outwardly normal pattern of behavior, largely to keep up appearances and for lack of any better ideas on how to cope – and yet their willingness to keep up appearances even around children, and for the sake of the kids’ happiness more than their own, suggests some subtle inner transformation and a bit less selfishness.

It’s less like a trip from darkness to light than like a trip from bland existentialism to tentative going-through-the-motions (and not so profoundly different than the going-through-the-motions for which the protagonist earlier criticized some of his own churchgoing-and-shallow relatives).  Furthermore, even the tentative change hinges on contingencies as subtle as whether the protagonist introducing someone as his fiancée is less embarrassing than alternative explanations and how quickly he could set up another date if that story didn’t take.  But one has to admit that this tentative quality makes it seem a lot less like mere fiction.  (It is hard to imagine Hollywood capturing this on film and hard to imagine most indie producers wanting to.)

In keeping with this month’s blog theme, I can’t help noticing that prior to his quiet semi-transformation, our protagonist confesses that only anger and partisanship really delight and excite him.  He reads both left-wing and right-wing journals, he reports, just for the joy of watching them get all fired up, without much caring who wins.  You can’t blame me for thinking that if religious people like this novel, though, there is a deeper, yawning emptiness in their lives that is only partially altered by their religious faith.

The protagonist here has found a comfortable path through a dark cave, but his world is still a pretty dark cave, if you ask me.  So many intellectual errors – political, philosophical, religious – are maintained by people’s belief that they have examined all possible alternatives and picked the best, when in truth they have examined only a narrow selection of all their real options.

There are many people to whom the life of faith hinted at by Percy would and should seem preferable to meaningless drift – but that doesn’t make Christianity the only alternative any more than an alcoholic cleaning up his act due to joining Islam or the Nazi Party has thereby proven the ultimate truth of those creeds.  Rejecting Choice A does not mean you are obligated to go for Choice B whole-hog.  Aim higher still.  For instance, try science, freedom, truth, friendship, kindness, and unflinching skeptical inquiry.

VI. In spite of my obvious misgivings about religion, I am sympathetic enough to the strivings of the religious folk to plan to see Dawn Eden speak at the offices of First Things on Sept. 13 – and was pleased to see her appearance at the June Dionysium I hosted mentioned in First Things’ mass-e-mail about her impending new visit.  Lunch with editor David Mills went well, too.

VII. However, for a reminder that the world needs skepticism more than faith, we need look no farther than recent stories about all-natural, traditional, Chinese remedies causing higher cancer rates.  Just because something fits into your aesthetically-pleasing narrative about the cosmos doesn’t mean it’s real.

VIII. Speaking of moviegoers, I think I will have to give this Bourne Legacy a try – but if they keep cranking these things out with new actors, I do hope they’ll start using joke titles like Bourne Again...Bourne Free...Bourne to Die...Bourne without Sin...

IX. I would never deny religion’s influence on art, after all – take Psychedelic Furs’ “Heaven” as one tiny example.

X. And speaking of punk-influenced bands, not long ago, I met a nice woman from a religiously-mixed family who’s been in punk bands – I seem to have some weird affinity for one or more of those demographics – though she promptly left the country for a spell, as a startlingly high percentage of women who interact with me tend to do (I think “I’ll be out of town for a few weeks” is the new “I’ll be washing my hair,” but I also know a lot of travel-prone people, so it’s not just me causing it – at least not directly).

I may be drawn to the weird, but I would rather lazily wait for it to come to me, thus my delight that Friday’s expected Pussy Riot verdict will echo right here on the Upper East Side.  Fingers crossed.  Safety pins fastened.
Posted by Todd Seavey at 10:15 PM