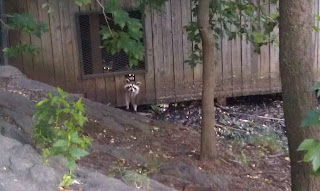 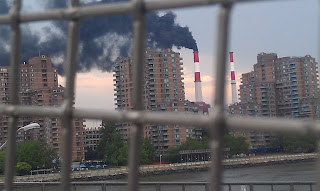 •One of my raccoon pics from Central Park (they come out from under the Boathouse at sunset!).

Yet mere blocks away, the factory belches filth into the sky (to quote my favorite song), across the river from my block.

•You may've seen this bear stealing a dumpster.

•There's a major multi-bear jamboree at this swell scratchin’ tree.

•And a deer and a dog who are best friends, frolicking.

•And cute Toad Hall-like photos of the animals who've taken over this abandoned house (h/t Carey Yaruss, who used to live next door to me with her giant dog, the late Echo Doppler).

Man is the “rational animal,” they say, but it’s easy to forget that on the brink of war.  To compensate for the madness and violence, let’s declare September on this blog a “Month of Reason” -- dedicated to examining some recent books from the folks at (and around) Reason magazine, that is.
Posted by Todd Seavey at 11:44 AM No comments:

5 Notes on the Future

•The future of Hollywood films in 2013: I'm not confident about any of this year's remaining films being cool -- aside from Machete Kills -- but I like the Catching Fire trailers more than I would have expected from the so-so first Hunger Games film, and it looks like it ought to be emphatic enough about the system being evil to allay the fears of critics who saw the first as just an overblown gameshow.

(This one being out same month as Ender’s Game will have to inspire some "Hunger's Game" mashups.)

•The future of skepticism (h/t Barry X. Kuhle); the final hurdle that my fellow skeptics must overcome is their naive belief that most science is something other than well-polished bullshit.

•And most important, the future as Carl from Aqua Teen Hunger Force foresaw it back in 2007.
Posted by Todd Seavey at 4:03 PM 3 comments:

It's hard for me to care too much, but given that Catsimatidis is a hideous fat doltish blowhard with no coherent ideas and can never win the general election once the rest of the electorate notices him, maybe I should urge fellow registered NYC Republicans to vote in the Sept. 10 primary for JOE LHOTA.

He's a Georgetown/Harvard grad who has faced down unions over budget issues and has some City managerial experience already -- perhaps the least of several major-party evils, given the parade of loons or non-entities the Dems are fielding (including the former governor almost certain to become City comptroller). Then again, should any man be rewarded for having run MTA?

Not that I would blame you for skipping voting altogether. And I am increasingly sympathetic to the idea that that is the most moral thing to do. The unions are simply going to continue scavenging the City's fast-rotting corpse regardless of which stuffed shirts hold press conferences and pretend to be in charge, after all.

And that will be the extent of my local electoral campaigning for the year. But it's important to make yourself heard.
Posted by Todd Seavey at 7:35 PM No comments:

Email ThisBlogThis!Share to TwitterShare to FacebookShare to Pinterest
Labels: Politics

Tonight’s the Bitcoin debate (8pm at Muchmore’s, 2 Havemeyer St., just three blocks east of the very first L subway stop into Brooklyn, which is Bedford Ave.).  You can (and should!) RSVP on Facebook here and read my Bitcoin-defending debate foe Sander Hicks’ blog entry about it here.

And if you’re the kind of subversive troubled by Adam Kokesh being held without bail, Bradley Manning getting a mixed verdict, and Edward Snowden having to seek asylum in Russia (all just in the past few weeks), you might take some consolation in knowing that promo videos for full-blown fascist parties are still relying upon bad techno music.

I, of course, am slightly more mainstream than at least some of the above and am just hoping that more Republicans react (like Sarah Palin the other day) by saying they’re on “Team Rand” when 2016 rolls around -- instead of joking, like the useless John McCain, about being torn about whether they’d vote for Hillary Clinton or Rand Paul.

Go on, really, vote for Hillary, neoconservatives.  It will make the sad, disastrous, century-long history of bipartisan Progressivism so much simpler to write.

Still: a Rand Paul presidential nomination would surely lock up the libertarian vote, much as a minuscule band of purists might quibble -- so the interesting hypothetical in my mind now is whether there’s a moderate-seeming yet libertarian-compatible running mate for him, perhaps Midwestern, perhaps a governor with a good track record.  And as it happens, there are a few, including former governor Mitch Daniels.

Against Hillary, it’d certainly help if the running mate were female as well (I already know Republican women saying they’d defect to vote in the first female president), but you can’t have everything -- and Daniels has had enough martial troubles we might be able to talk him into a sex change.  Gotta think strategically here as well as philosophically.
Posted by Todd Seavey at 10:58 AM No comments: 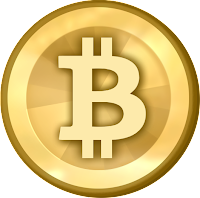 The Dionysium presents a debate next week, Mon., August 12th (8pm) on

"Bitcoin: Can It Endure as a Currency?"

with loads of audience Q&A -- and by all means spread the word to those, y'know, money-type people.