Petraeus, Hedges, and the libertarians who stand with neither 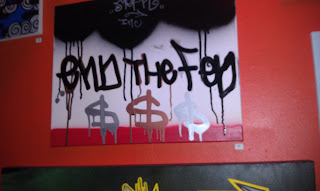 The buzz about Petraeus yesterday was a reminder of how deep the divide is between mainstream Republicans and what seems to be the fastest-growing wing of the libertarian movement, the Ron Paul-style anti-imperialists (who have also done much to spread the once-obscure cause of opposition to the Federal Reserve, which now even results in things like the nearby bit of art, on display during a recent karaoke excursion to Bar 82).  Romney wouldn’t win any of the Paulite libertarians over by literally putting Obama’s CIA director on the GOP ticket (best to vote for Gary Johnson in November, I’d say, even with Rand Paul getting a speaker’s slot at the GOP convention in three weeks).

Indeed, anti-imperial, anti-Fed, anti-establishment issues have played such a big role in the Paulite boom that I won’t be at all surprised if the Republicans, in their tone-deafness, manage to drive many of those people away not just to the Libertarian Party but clear over to the left (and the impulse of neocon readers to say “Good riddens!” at this point is why the neocons will not prevail – am I the only diplomat left in this culture?).

I notice a few libertarians online even quoting the leftist writer Chris Hedges with approval, simply because his assessment of the state of the U.S. is so dour and distrusting.  That’s not a good sign for anyone, especially since Hedges is about as anti-capitalist as they get, and if libertarianism does not have the net effect of making this world more market-friendly, it likely accomplishes nothing at all.

Here’s the grimly anti-capitalist official description of what is unfortunately a best-selling current book by Hedges – augmented by talented cartoonist Joe Sacco.  I’m glad I already had Hedges pegged as a hysterical, free-associative ranter, as he may be a recurring problem:

Chris Hedges and award-winning cartoonist and journalist Joe Sacco set out to take a look at the sacrifice zones, those areas in America that have been offered up for exploitation in the name of profit, progress, and technological advancement. They wanted to show in words and drawings what life looks like in places where the marketplace rules without constraints, where human beings and the natural world are used and then discarded to maximize profit...The book starts in the western plains, where Native Americans were sacrificed in the giddy race for land and empire. It moves to the old manufacturing centers and coal fields that fueled the industrial revolution, but now lie depleted and in decay. It follows the steady downward spiral of American labor into the nation's produce fields and ends in Zuccotti Park where a new generation revolts against a corporate state that has handed to the young an economic, political, cultural and environmental catastrophe.

You are the worst writer ever. the vibes associated with your words don't belong on this planet.

I am not the other anonymous, either.

The code I need to enter is "allyung" - likely what you look for when playing up your "brilliant host" persona.