Tiny Horse Runs Amok (but Is NOT Sign of Small Apocalypse) 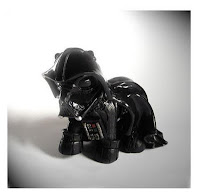 •There’s something Best in Show-like about this tiny horse running rampant while the announcer drily explains the history of the event and breed.  They should use one of those things in one of those chase-the-chuck-wagon dog food commercials.  They’d save money on the special effects budget.
•Tomorrow, if you believe that idiotic Christian sect (is that redundant?) with all the “May 21” doomsday ads, maybe we’ll find out if the four horses of the Apocalypse are larger than this.
•Note WITH A SMALLVILLE SPOILER: Tomorrow’s Apocalypse is not to be confused with Apokolips, which arrived one week ago on the typically-mediocre Smallville finale.  The idea, revealed at the very end, that Clark and Lois faked the classic dweeb/hard-to-get act for seven years is strange but intriguing.  I would almost like to see that dynamic explored further – but not by the makers of this series.  Of course, it appears possible that Superman’s basic story will get rebooted twice in the next year and a half, once in the comics and once on the big screen, but those are stories for another time.
•To atone (before it’s too late!) for the dog food joke above, here’s a link forwarded by my vegan pal Diana Fleischman about a man who just wanted to take his horse on a train.  Having just seen and greatly enjoyed Duncan Jones’ sophomore effort Source Code, about a sci-fi mystery aboard a train, I can’t help thinking that if we replayed the events in that linked story in enough detail, we might understand them better – and have the basis for a film called Horse Code.
P.S. My “idiot” crack above should not be construed to mean that Christians are any stupider than Michael Medved.
Posted by Todd Seavey at 1:48 AM