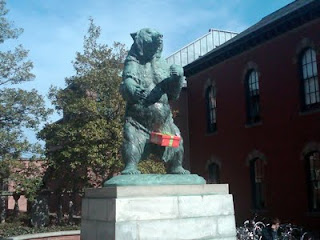 Yes, that’s the Brown bear with his junk in a box in the nearby photo (so this entry still sort of fits into my “Month of Animals” theme).
I’m heading back to Brown today for a reunion (Table MD-92 tonight at Campus Dance, people), which reminds me how lucky I was to be somewhere saturated in alternative rock even before it took over the airwaves in the early to mid-90s.  There’s still stuff today that harkens back to the trippy “shoegazer” era (the specific sub-genre of early-90s alt-rock that dominated MTV’s 120 Minutes back when now-libertarian VJ Kennedy hosted).  Witness the Vaccines’ “Wreckin’ Bar (Ra Ra Ra),” “If You Wanna” (Daniel Radosh likes that one), and “Blow It Up.”
More literally combining Brown then and Williamsburg today (along with a few other regions and times) is this swell song, “Williamsburg Will Oldham Horror” by Jeffrey Lewis, about a Williamsburg hipster (Lewis) spotting an indie-folk giant (Will Oldham, Brown Class of 1990, who back then was just the young actor who had played the preacher-boy in Matewan and is here played by some other actor with a beard).
Will Oldham is one of the very few people to act in the union-idolizing Matewan, become an indie-folk legend, be written about by another hipster singer, act in the reportedly horrific “mumblecore” movie Julien Donkey-Boy, and play the role of a gorilla-trainer in Jackass 3D, though I have not checked to make sure no one else fits that description (surely, many people have that specific combo as an aspiration).
One (or at least I) could write a whole book of pop culture footnotes about all the connections and implications here, but suffice to say I’m frightened by any tie between mumblecore and Jackass and hope the culture veers more indie-folk than “mumble-ass,” if we must choose.  (Oldham, like the singer from Iron & Wine, also appears scruffy enough to make me worry that he may be suffering from progressive hillbilllyism.)
As for Lewis, he is also a cartoonist and did album cover art for the Durham-dwelling Mountain Goats (their song “No Children” seems to ring truer ever time I hear it).  So, he also has an indirect tie to that apparently trad-hipster town, to which several women in my life also seem to have had some connection (I have two exes living there at this very moment and a third who hails from the place, making it almost like DC in that regard).  It may be a crucial locus of new-meets-old.  Then again, a punk fan I know who lived there (after his time at Brown, where I’ll see him tonight) claims all most people he met at Duke seemed to care about was sports.  (Blogger Amanda Marcotte, who I met last weekend, would probably claim all anyone at Duke cares about is rape, but that’s a whole different story.)
A few more twenty-year-old music memories, though:

•The Darling Buds’ “It Makes No Difference.”  Three cheers for the Internet era and all, but I'm not really convinced the culture has much at its disposal aesthetically in 2011 that wasn't already there when this edgy number came out in 1991 – lotta mixing and matching since is about it (more jug band influences and the like, as the previous paragraphs suggest, though it's not clear that counts as progress in the classic sense of the term, even if we like the results).
•Though I have an old audiotaped copy of the Leonard Cohen tribute album I'm Your Fan (having been made aware of Cohen by my friend and fellow Brown alum Chris Nugent, who actually spent time at a Buddhist meditation retreat with Cohen and is now a Chinese language professor), I was not aware that that album's cover of "Hallelujah," done by ex-Velvet Underground member John Cale, was the crucial missing link between Cohen's original version of the song and the more well-known later Jeff Buckley version.  Per the interesting Wikipedia account:
John Cale's cover first appeared on I'm Your Fan (1991), a Leonard Cohen tribute album, and later on his live album Fragments of a Rainy Season (1992).  [Cale had constructed his version from unused and only-used-live lyrics faxed to him by Cohen.]  Cale's version forms the basis of most subsequent performances, including Cohen's performances during his 2008–2009 world tour.  It was also the version used in the film Shrek (2001) (although it did not appear on the film's soundtrack album).
•If twenty years ago a funny ska band had miraculously transformed into Rush, it would sound exactly like...Fishbone’s “Sunless Saturday.”
•Anyway, here’s hoping I spot Lisa Loeb (Class of 1990) at Campus Dance tonight, or maybe Emma Watson (Class of 2013), who is starting to look a bit like the little redhaired girl I had a crush on in junior high, though I do not any longer look like I am in junior high, it’s important to keep in mind.
Posted by Todd Seavey at 6:15 AM

Two small corrections: Oldham is class of '92, or at least he was a freshman when we were sophomores (and Peter and enjoyed a certain medically semi-legitimate herb with him).

"Julian Donkey Boy" is many things (few of which I enjoy), but I've never heard it described as part of the "mumblecore" genre (and indeed it doesn't seem to fit with films like "Hannah Takes the Stairs," etc. at all).

Further investigation reveals Oldham appears to have dropped out after one semester, so some chroniclers may have been confused about his fleeting academic career.

I will also take your word for it on the film, since I've seen almost nothing related to this area but had often heard Harmony Korine and mumblecore discussed in the same breath and so may be unfairly lumping them together. Is there a broader term for movies where some nut holds a cheap camera while young kids beat the crap out of each other and stuff? (Steampunk? Ska?)

I think the term is "Harmony Korine film."