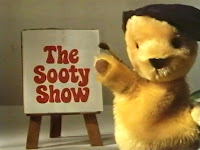 Ah, looking back at it all, I’m glad I pushed the “Conservatism for Punks” trope, even though I’m now going to expand my mandate ideologically and aesthetically (in part by holding future bar events in eclectic Williamsburg – but you can still catch us at Langan’s for one last Manhattans Project gathering, this coming Monday, August 15, 7pm-on).
I am pleased to see Muslim punk bands arising.  I am more disappointed to see Morrissey’s veganism preventing him from recognizing the tragedy in Oslo (so often, those who purport to care deeply about animals are the real sociopaths, and Morrissey may just not be someone who emotes enough – but read my blog entry from yesterday for more on the problem of low empathy).
Morrissey should be pleased to know that animals can strike back, though (humans aren’t the only ones rioting in the UK right now): Gareth Roberts points out that Sooty – a UK bear puppet (a copy of whom I had as a child, given to me by mother, who had it before me) – recently injured an elderly magician by hurling a pizza at him.
They’re saying it was an accident, but I say BEARS WILL RISE.  People have to learn that these creatures are wild animals, not pets.  It is inevitable that they will throw pizzas in captivity, just as flesh and blood bears throw pizzas in the wild.
On another backwards-looking note, Christine Caldwell Ames reminds me that in Fast Times at Ridgemont High, Jennifer Jason Leigh asks Phoebe Cates, “Do you think guys really like girls that look like Pat Benatar?”  We still do, as the second-ever video shown on MTV, Benatar’s “You Better Run,” reminds us (one of her many ass-kicking early performances sometimes forgotten in light of later, fancier compositions).
Is it any wonder I thought of women as strong when I was a kid, long before college feminism attempted its feeble, pity-seeking propaganda efforts?
Posted by Todd Seavey at 11:18 AM

ADDENDUM: And speaking of fake bears, Jaime Sneider notes these awesome photos from the article "Panda Returned to Wild By Completely Inconspicuous Men in Bear Suits":

They’re saying it was an accident, but I say BEARS WILL RISE.

And once they unite with boars we're done for!