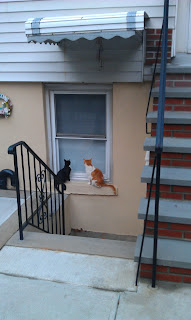 As prep for my impending new series of bar events in Williamsburg, here is a picture I took of cats in the Greenpoint/Williamsburg area who, oddly, were staring into a window that seemed completely opaque from where I stood.  I’m not sure what they were watching in there.  In other animal news: the awesome hiphop Kia hamsters are back, and Misery Bear is brave in “Dawn of the Ted” (recommended by Mary Madigan).
I’d like to use comedians more at the new events, though that might drive away one friend of mine who says she has had such negative experiences dating comedians that she now has a rule against ever doing so again and thinks they are very disturbed people.  That’s certainly the stereotype, but it’s amusing to hear it turned into a rule a la “no smokers.”
Now, on to politics:
I.  Years of watching superheroes beset by villains (as discussed in yesterday’s entry) may have conditioned me to like people more if their foes attack them for insane reasons.  Thus, Rick Perry is growing on me, despite his flaws.
I’m not calling all these critics crazy, but if you believe them all, he’s a:
--Christian Dominionist per feminist author Michelle Goldberg.
--Muslim-symp per neocon Pamela Geller.
--libertarian radical per moderate Romney’s team.
--part of the statist “international conspiracy” per paleolibertarian Ron Paul four years ago (which could lead to some weird debate confrontations).
--crony-capitalist per more mainstream libertarians (who are right, of course).
And yet somehow...my sympathy for Rick Perry grows, I must say.  Surely, the fact he’s polling around 27% while everyone else but Romney is in single digits makes this primary process look a bit more inevitable, in any case, so it’s worth mulling his pluses.
He may not be a perfect fusionist, but he’s a figure around whom the center-right coalition could comfortably fuse.  No president since Reagan has really talked in terms of making DC as inconsequential as possible in our lives, and that in itself could prove, if not a leap, at least a step in the right direction.
The idea of getting the truly-radical Ron Paul into the White House and watching the world change is surely appealing, but that’s not likely to happen.  However, while Paul’s still at it, I perhaps owe my neocon friends (with whom I do not wholly disagree) a further explanation of how I can like Paul, and I think this Glenn Greenwald article is a hint: It suggests a military-industrial establishment so vast and stupid and wasteful (and growing domestically) that I’m not sure even an outright anarchist president could make much of a dent in it before his term in office was up, so why not let a Ron Paul take a whack at it and trust that he probably won’t leave us holding nothing but cap guns and a baseball bat even if he’d like to?
Then again, a thoughtful friend of mine e-mails this reaction to the Greenwald piece: “Heck, those cool-as-shit boom-boom rigs are just about the only thing the government should be doing.  Yeee-haw!”  Perhaps.  Perhaps.
II.  I don’t know that the definitive article has been written about this, but the oddness, from an intra-libertarian perspective, of the Ron Paul wave of new interest in libertarianism is that this is not how any of us, back in the 90s or even most of the Bush years, expected the movement to expand.

It’s not quite a neolibertarian (that is, conservative-sympathizing and moderately hawkish), “liberaltarian,” or Reasonoid (sort of lifestyle-left) outcome (respectively the Seavey, Levy, and Gillespie plans, roughly).  We were all wrong about what would spread the word.  Turns out it’s a bunch of leftish-seeming college students (including more females than in my day) idolizing a pro-life, seventy-six year-old, antiwar Texan with conspiracy theory tendencies.  Who foresaw this?
But this is preferable to floundering in even greater obscurity while the financial crisis-inspired conspiracy people and populists all turn their energies in a Marxist direction, which could so easily have happened.  We dodged a bullet, really, in having as moderate a president and as moderate a populace as we do (really, seriously, in both cases), plus this quirky burst of libertarianism, not to mention the Tea Party fervor.  The political response could have been far, far worse, if history is any guide.
III.  Speaking of ways things could get worse: the Romney team’s reported plan of attack against Perry turns out to be a devastating argument against Romney.  I would not vote for Romney in the general if these are the sorts of statist arguments he plans to use against Perry during the primaries.  (And I say this as someone who technically ended up supporting Romney in the primaries, by the end, last time around, since Ron Paul was clearly doomed by then and something had to be lobbed in McCain’s path.  I ended up voting for Bob Barr in the general.  This time I can’t foresee voting for anyone but Paul and/or Perry.)
Perry’s not smart enough to be a consistent ideologue, I fear, but he might not be so unlibertarian anyway.  Romney’s people see Perry as anti-Social Security, anti-Medicare, and anti-border-fence (that last bit being an improvement over Paul, really).  And the fact he was a Democrat two decades ago just makes him sound capable of growth.  His cautious tone on military matters is encouraging, too, especially given the incentives to wax hawkish in the GOP primaries.
Who can best work with Dems, GOP, and, crucially, the libertarian elements of the Tea Party?  Perry likely consolidates recent libertarian gains.  Romney renders them irrelevant.  I think we have to go with Perry.
Posted by Todd Seavey at 10:54 AM

Addendum: You know, I forgot to mention there've been rumors Perry's gay, too. And another Bush. Yet hated by the Bush dynasty. Truly, he is all things to all people.

George W. Bush as sold in 2000 was many things to many people and the kaleidoscope Rick Perry sounds to me like much of the same. He obviously is not all things people believe him to be.

For that matter it is possible that Ron Paul may not be able to deliver all that he advocates either but at least starting from a position of known ideas applied in real life any slippage is going to be the fault of his opposition and not an elected candidate being "realistic".