Peacocks Will Rise (and descend, plus Seavey family dog vs. gangstas!) 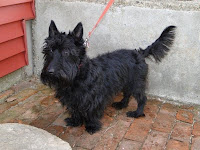 That peacock that escaped from the Central Park Zoo yesterday decided to fly back home – or at least into the goat pen.  Is he a super-intelligent peacock planning a wider revolt?  Probably not, but as a warm-up for this weekend’s release of Rise of the Planet of the Apes (the plot of which is roughly summarized by this clip), here are some animal-related items:
•First, kudos to Mac, my parents’ awesome Scottie (even with his habit of ramming people with his prodigious snout), who survived an attack by a pit bull this week and a subsequent vet visit (he’s fine aside from a broken blood vessel near his eye, which should heal soon), thanks in part to a kick to the pitbull’s head by my mother.
The sweetest part of this story, to my mind, is the fact that the idiot couple who own the pit bull – and were quickly caught by visiting animal control officers and slapped with various charges – are the parents (unsurprisingly) of one of the only two sadist/bully kids I encountered in junior high, during a mostly-pleasant and non-threatening childhood (Malcolm Gladwell has written about how it’s the owners, not the latest fashionable breed among thuggish owners, that matters).
I was too young and naive back then to realize that the cute blonde girl always talking to me instead of the two thugs in question at the bus stop in the morning may have added to their insanity (I don’t remember her last name now, but at the time I thought she looked roughly like Kim Bassinger).  In any case, good boy, Mac, taking down the crime family I failed to confront.  (And just in the nick of time, too, since I only hold grudges for about thirty years.)
It would have been cooler if Mac first had to team up with his friendly neighborhood rival Biggie the Bulldog, like Gilgamesh joining forces with Enkidu, to beat the pit bull, but real life isn’t Hollywood...quite (and thank goodness, from what this Kyle Smith piece says about how Hollywood works).
•You may feel guilty being amused by this footage of baby ducklings being knocked down by the wind, but there is something mesmerizing about it, in an Angry Birds way.
•You may also feel that you are betraying the causes of feminism, animal liberation, and good hiphop music by watching this hilarious rap video about a man who can summon wolves to fight his girlfriend.  (My main question for Dragon Boy Suede would be: How does the shark disguise help?)
•In other trashy-fighting news, the “Octomom” is taking up boxing, the trashiest sport (she can’t be any more annoying than the smart-alecky kid in the trailer for that de facto Rock ’Em Sock ’Em Robots movie, Real Steel).
•An unusually frank song accompanying a stupid cat video (noted by Golchehreh Abtahian).
•If you need a better song after that, especially if you are an LSD-taking foot fetishist, “All Is Not Lost” because you will really enjoy this new OK Go video (pointed out by Marcia Baczynski).
•But you probably had better not still be on acid when you watch this clip of a squid, which, even with most of its head-innards removed, has nerve twitches caused by the application of spices while it’s sitting in a dish in this Japanese meal, waiting to be eaten (as pointed out by Walter Olson).
•If I’ve said it once, I’ve said it fifty times (channeling Pat Benatar each time Drudge links to a story like this): Stop using snakes as a weapon – stop using snakes.
•More innocent is this fun footage of van riders reacting to the realization they have a large water moccasin crawling all over their windshield – and then side mirror – as they drive down the highway.
But tomorrow, something about a more important animal: the bear market.
Posted by Todd Seavey at 12:05 PM