Book Selection: “Destroy All Movies! The Complete Guide to Punks on Film” (and speaking of videos...) 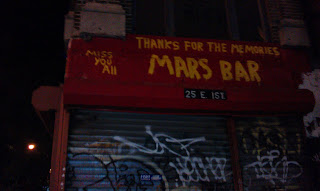 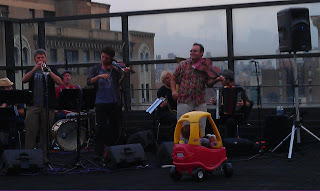 ToddSeavey.com Book Selection: Destroy All Movies!  The Complete Guide to Punks on Film edited by Zack Carlson and Bryan Connolly (with Foreword by Richard Hell)
(The photos above aren’t from the book.  One is a picture I took recently of the now sadly-closed and punk-beloved Mars Bar, where I drank with an evil female punk fan just last year, though that now seems an epoch ago.  The next is a kid in a tiny car listening to gypsy musicians, not punks.  The third is Sophie Scholl, an activist executed by the Nazis who surely deserved to be on a Smiths album cover and should still be used on a Morrissey album cover someday, if you ask me.  By the way, Madonna this month turned fifty-three, having run the culture for most of that timespan.)
•It would be very stupid not to buy this book.  No hip home should be without this massive – and visually striking – encyclopedia of every movie ever to feature a punk (in the late twentieth-century subcultural sense of the word), published by the mostly-comics company Fantagraphics (for which my frequent conspirator Scott Nybakken used to work).  There must be about 2,000 films in here, many featuring the apocalypse and/or CBGB’s.
I suspected before reading the book, and am now certain, that one could devote the rest of one’s life to watching movies about punks and zombies fighting in post-apocalyptic or dystopian near-futures, if one were so inclined.  Of course, nearly all of those movies would be terrible, as the writers in this volume – many of them video store employees or customers from Washington state and their writer/moviegoer associates – readily admit.
•And now may be a good time to admit that I don’t expect to post the video of my June speech to the Junto about “Conservatism for Punks,” which would apparently take up a third of the memory on my computer even if the posting went smoothly tech-wise, and who knows whether it would.  And though beggars cannot be choosers – and I am thus not complaining – it also appears that my volunteer punk-singer amateur videographer from last month’s “roast” at Lolita Bar hasn’t been able to cobble usable footage together.
•I remain convinced that these events actually occurred, though, and one of these days will figure out an easy way to do video and podcasts on my own without a major TV network helping me but am busy enough with words for now.  And please do not e-mail to assure me how easy amateur video and audio production is these days, and how I should “just use system X and toss it on site Y,” unless you really, really want me to hate you forever.  Think carefully now.  One of humanity’s biggest problems is people thinking that systems it took them weeks to master should fit effortlessly and quickly into other people’s schedules, which is also part of the reason that most people can’t teach, including many teachers.
•To compensate for the lack of Junto and Roast video, a friend of mine suggests instead this very brief clip of John Podhoretz’s defense of the efficacy of domestic War on Terror measures at the recent Commentary panel discussion here.  Oh, sorry – wrong clip.
While we’re this far off course, two more brief conservative comments before we get back to the punks:
•The Nation actually managed to increase my sympathy for Romney for a moment by titling an article “Romney: Dark Prince of Oligarchy.”  It was a reaction to his perfectly-accurate observation that corporations are made up of people.  The horrified Nation writer argues – just implicitly asserts, really – that they are not.  I wonder if he thinks, say, bird-watching societies are people.
•Meanwhile, in Texas: if life were a bad old Saturday morning cartoon mystery show, the fact that Rick Perry (rather reasonably) mandated use of the Gardasil vaccine for public school children would turn out to be connected to the fact that he oversaw comparably controversial business subsidies to companies such as the biotech firm Gradalis (“Holy anagrams, Batman!” etc.).  If Pam Geller were one of the mystery-solving gang, Perry, in a shocking twist, would later be outed as a closet Islam-sympathizer instead of a closet Christian-theocrat, since she complains that he dared participate in some forum with Muslims, etc., etc.  I just want budget cuts and deregulation.  Is that so wrong?  (DISCUSS THIS OR OTHER STUFF WITH ME AND OTHER NON-LEFTISTS TONIGHT AT 7 AT THE O’LUNNEY’S BAR ON WEST 50th JUST WEST OF BROADWAY, if you like.  I’m not the organizer, but I’ll be there.)
The UK singer Adele is tired of big government, by the way.  Sing it, sister.  (Lady Gaga probably wants some sort of communism.)
•One could write several additional books about the cultural implications of many of the entries in Destroy All Movies!, especially the numerous late-70s and early-80s documentaries about the surprisingly well-documented fledgling punk movement, so I’ll just react to a fairly random smattering, skewed toward mainstream films, here:
--I learned that proto-grunge band Mudhoney perform in the 1996 Farley/Spade film Black Sheep, about a politicians’s idiot relative becoming popular with the electorate.  My friend Dave opines, “To me that means Nirvana said no, and Soundgarden and Alice in Chains said no, so the producers said, ‘These guys must be next in line to hit it big, right?’ Wrong.”
--The book suggests the worst movie of the lot is
Frezno Smooth, which features a cameo by Michael Ness of Social Distortion as a bowling alley customer.  It is the only film in the entire book illustrated with a picture of one of the editors smashing the VHS tape with a hammer.

Email ThisBlogThis!Share to TwitterShare to FacebookShare to Pinterest
Labels: Book Selections, Culture, Music, Sci-fi and such

CARNIVAL MAGIC aired on TCM Underground just before the DVD/Blu-ray combo was released. It is indeed engrossingly awful.