Comics (Including the Online Debate Back in 1985 Over the DC Universe!!) 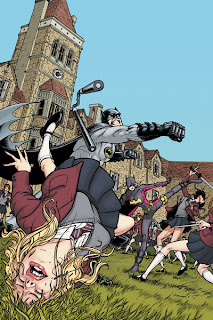 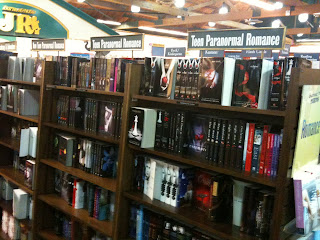 Batman fighting a girls’ school (as written by Grant Morrison, author as well of Supergods, about which more in the days ahead) may seem a bit tawdry (and not so unlike some evils alluded to in yesterday’s punk-filled entry), but extreme measures are called for these days to lure young readers away from the vast Barnes and Noble “Teen Supernatural Romance” section, seen in the pic above taken by Dan Greenberg.  DC Comics has other plans as well.
Tomorrow’s a big day for the company.  After decades of shrinking sales (something like a million copies a month for the most popular books back circa WWII and at best 100,000 or so now) but gradually improving film adaptations, they’re starting all their series over from issue #1 beginning with Justice League #1 tomorrow (followed by fifty-one other #1s in September alone), presumably aiming for a new clarity and simplicity in the basic premises of the series and enabling new readers to hop aboard.
An extreme editorial move if ever there were one (as my “Month of Extremists” nears its end) – and an excuse to raise several comics-related points (the rest of you are excused):
•The opening paragraph of this article is a reminder that the real world keeps getting more comics-like (and may whet your appetite for next year’s Amazing Spider-Man movie from Marvel).
•If DC is going to revise characters, I suggest starting with Aquaman’s archfoe Black Manta.  There’s something deeply wrong about the fact that he looks and behaves like a pretty stock villain but has as his origin (A) having been a kidnapping victim left resentful of Aquaman (and the sea) after a protracted period of being sexually abused on a boat, (B) also/or hating the violent treatments with cold water he received while being an autistic child, (C) and being a drug dealer for a while before (D) being mutated temporarily into a manta-man and (E) ending up (at least pretending to be) an angry black nationalist who wants black people to live in the ocean (the ocean that he hates).
If they make up a new origin for him now, I will not call it the wrong thing to do.  As it is, I almost wouldn’t blame a liberal jury for acquitting him of all past crimes (including killing Aquaman’s son) so long as he underwent psychiatric treatment.
Worse, how can they not give a character called Manta some kind of cape?  It’s insane.
•Speaking of psychological damage, here’s a fascinating real-life retcon: the producer of the movies Look Who’s Talking and C.H.U.D. II (a film that appears in the punk encyclopedia I reviewed yesterday) suffered brain damage (after making those films, just to be clear), was in a deep coma, and a decade and a half later has a condition that makes it impossible for him to make superficial movies.
•For the many fans fearful that DC, even with a fresh start, will never be able to keep its ostensibly-coherent fictional universe’s continuity straight, this interview snippet pointed out to me by Jacob Levy is not encouraging:
[Interviewer:] Have you guys had to modify at all your version of Wonder Woman to mesh with the version of the character in Geoff Johns and Jim Lee’s Justice League?
[New Wonder Woman writer:] I don’t worry about that stuff.  I don’t know, it must be okay, I haven’t heard anything!  [Wonder Woman artist Chiang laughs]  No one’s come to me and said, “Hey, you can’t do that” yet.
•In the rebooted Justice League International, it appears the hero Booster Gold will now be a Canadian, and a female character will appear who has been dubbed a “foxy Margaret Thatcher” by Rich Johnston.  If only that were the actual plan.
•I believe it was the profoundly wise and manly Carl of Aqua Teen Hunger Force (who I also noted in yesterday’s entry) who told a time-traveling robot that purported elements of Carl’s personal history seemed contradictory and received about as good an explanation as we’ll likely get from DC if anything goes wrong. Here is the heartwarming scene.
•Terrifyingly, online debates over changes to DC Comics continuity have been going on – in almost exactly the same terms – not just since, say, Hypertime was introduced in the late 90s but SINCE 1985 WHEN THE CRISIS ON INFINITE EARTHS SERIES WAS ACTUALLY IN COMIC SHOPS!!!  And thanks to Google Archives, we can still read those conversations (as noted by online commenter ADMwriter)!
It’s like finding footage of oneself in childhood saying something identical to what you said last week.  And Professor Zoom thinks he can time travel?
(Maybe it really is best that we move on to 90s nostalgia now.  And, much as it pains me, so I shall, in just two days.  Let the word go forth.  Farewell, Duran Duran.)
•That 1985 series cast such a long psychological shadow, with
its depiction of multiple DC realities clashing, that I notice a BleedingCool.com columnist, without going into any further detail, says about two years ago he heard an ESPN commentator respond to the observation that two different NBA players were using the nickname “Superman” by going into a “detailed” explanation of the Crisis on Infinite Earths.