Transformers: Dark of the Moon -- The Greatest Film Ever Made 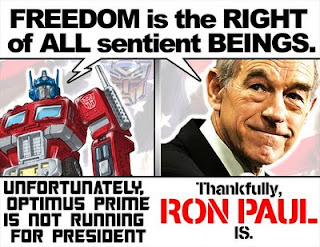 I saw something beautiful in IMAX 3D, and it was Transformers: Dark of the Moon.  I felt as dirty and stupid after the previous two Transformers as any intellectual should, don’t get me wrong – but Michael Bay has perfected his unique craft.
And there are wingsuits, the real-life man-as-flying-squirrel outfits that I praised in one of the parts no one remembers from my appearance on that ninety-minute C-SPAN2 broadcast last year.  In IMAX 3D.  The Transformers, I mean, not the C-SPAN2 thing, though I trust with better lighting on everyone, the latter would also have been fit for IMAX 3D.
Futhermore: The robots are no longer too visually complicated to follow.  The human dialogue is kept to a minimum, aside from yelling about action stuff.  Military-vehicle porn has been traded for Chicago-architecture porn (closer to my heart).  But fear not, neocons – those wingsuits are not exactly being worn by pacifists, the American flag flies majestically, and, yes, there is even an Autobot raid on a Middle Eastern nuclear facility.  Optimus Prime has merely traded his gung-ho talk for more-explicit freedom talk – and placed this film in an explicit debate with Star Trek in the process.  The tide may indeed be turning.
Don’t tell executive producer Spielberg what it all really means (then again, if even John Lennon was becoming a conservative toward the end, maybe there’s hope for Spielberg – and maybe it’s time conspiracy theorists shift tactics and start asking whether that’s why they took Lennon out; no, don’t).
Thank goodness the final Harry Potter (itself pretty cool-looking from the trailers) doesn’t come out for another two and a half weeks, giving America ample time to transfer the GDP to a deserving Michael Bay.
•••
Related bonus news:
•The trailer for Real Steel, about a washed-up boxer played by Hugh Jackman training an old robot to fight, made clear that they should at least have considered marketing it as Rock ’Em Sock ’Em Robots: The Motion Picture.  In any case, it is another reminder we shall “evolve” into the robots in the end, and robot butlers will at last quietly vanquish monkey butlers – but may the robots never forget their primate roots.
•If the trailer for Mission: Impossible – Ghost Protocol looks superior to the previous three M:I movies, it may be because the director is Brad Bird of The Incredibles and the tragically-overlooked robot tale Iron Giant, now permitted to play with real people (and Tom Cruise).
•Here’s a PSA from a couple years ago, though, reminding you not to take robots lightly.
•In other animation news, the whole Monty Python gang – yes, even the late Graham Chapman – is getting together to do the voice roles in a new movie.  This is good.  If ever there were an honorable way to use a dead actor in a movie, this is it.
•••
Added joy from the new Transformers: relishing the absence – and Hitler-related downfall – of the “dumb as rocks” Megan Fox.
Let the record show that despite her physical beauty, I always
found it alarming that she sounds like a child when she utters her lines – and that print journalists, who in theory should be less susceptible to visual appeal, were sadly susceptible instead to her proud claims of being a sexually adventurous blah blah blah transgressive ho-bag blah blah blah.  Enough with the depravity already.

On a (literally) more lofty note, here's a delightful relic from a more optimistic decade – one as indebted to crazy Japanese sci-fi aesthetics as the Transformers: Japan’s X-Seed 4000 super-skyscraper!  I love the mention of it facing structural risks from volcanoes similar to those of “the Shimizu Mega-City Pyramid,” which sounds for all the world like something out of the cartoon series Giant Robo.
My architect pal Dave Whitney laments the self-indulgence of some of these never-meant-to-be-built designs, which reminds me that in one of the best stories from the Legion of Super-Heroes comic book, back in the 80s, the character Darkseid had an entire planet reshaped to resemble his head, by an enslaved race of Kryptonian-like supermen.  It is worth remembering that Darkseid is pure evil.
•••
On a more automotive note (the Transformers do turn into cars, after all), I was a bit alarmed by an insurance ad with the dangerously ambiguous message “If You Haven’t Had a DUI, You're Paying Too Much for Auto Insurance.”  Wait, what are they telling me to do exactly?
This ad may be a spur to some Darwin-affirming customer reactions.
•••
By the way, lest I sound like I’m spending all my time watching crap (like an aging Stan), I actually find myself slightly envious of people who talk about watching television, since I virtually never do – even though I have cable now (unlike the past couple decades) and am a ghostwriter who ostensibly has a fair amount of power to make his own schedule.  Where do other people find all the time?  What aren’t they doing?
Posted by Todd Seavey at 6:22 PM