1. Green Lantern was lame.  In spite of the limitless possibilities of a ring that can reshape reality, it wasn’t even lame in an interesting way.  Indeed, DC Comics now has its Daredevil, so to speak.
It’s not even dumbed-down 50s comics, it’s dumbed-down Geoff Johns-written stuff from the past six years – dumbed down by co-producer Johns himself, presumably: the planet Ryut, the potential creation of a Sinestro Corps, etc.  It’s all there – but still uninteresting.
The fact that recent depictions in the comics of the Green Lantern villain I once loved, Krona, have clearly been a scramble to make the tone of the comics jibe better with the film only makes me feel as though the cancer of the movie’s badness has been spreading for some time – and to no real purpose, since both the bad film and the current version of DC Comics reality will be forgotten by summer’s end.
There’s a funny Onion News piece about how little anyone cares about Green Lantern that faux-quotes star Ryan Reynolds saying he’s been a Green Lantern fan ever since he learned he’d be starring as Green Lantern.
More troubling – at the risk of me sounding yellow – is a real New York Times quote from Peter Sarsgaard, who plays the film’s villain and is apparently Catholic: “I like the death-cult aspect of Catholicism.  Every religion is interested in death, but Catholicism takes it to a particularly high level...Seriously, in Catholicism, you’re supposed to love your enemy.  That really impressed me as a kid, and it has helped me as an actor...The way that I view the characters I play is part of my religious upbringing.  To abandon curiosity in all personalities, good or bad, is to give up hope in humanity.”
Combined with the fact that he dated burlesque model Dita von Teese, this makes me fear he’s one of those darkness-excusing bad Catholics of whom I’ve become more conscious in the past couple years (despite the Pope’s efforts to convince you that we utilitarian pro-science types are the source of moral nihilism in the world).  Maybe Parallax hasn’t been banished.
(One more DC Comics thought: since Superman has been walking across America in recent months and is apparently single again in the new DC Comics universe, maybe instead of just having his marital status be altered by the change in the cosmos, they should end his current comic with him walking back to Metropolis and saying, “Lois, I’ve been walking – and I’ve been thinking...”)
2. I derived far more pleasure from the brief intro animation sequence from the new videogame Star Wars: The Old Republic than from the entire Green Lantern movie.  Really, check it out.  And I’m not even a gamer.
Once again, there are those drawn to the Dark Side, though, as we are reminded by this hilarious thirty-five-second clip of a live Star Wars amusement park event in which a little girl doesn’t quite follow the script.

3. The picture above from next month’s Captain America movie – of villain the Red Skull (Hugo Weaving) holding the reality-altering Cosmic Cube – makes me think
the brief glimpse of the Cube in Thor would have been much more effective if Captain America (which takes place seven decades earlier) had been released first, though I have no idea if that was ever the plan.

Red Skull was always after that Cube in the comics, and I’ll be satisfied if the movie just treats it as some occult Nazi object the Skull created or unearthed, without further explanation.  The Cube’s “real” backstory from the comics is so frickin’ complicated (as a result of creative indecision, I think, as is often the case with the most complicated comics things) that I’d be slightly embarrassed, as an ambassador of geekery to the broader populace, if they even tried to go into it all.
The Cube has by now been linked to – and co-created/altered/wielded by/intimately connected to – Red Skull, the alien Skrulls, the evil organization called A.I.M., the giant talking head with limbs known as M.O.D.O.K. (it’s what drove him mad, you know, though I don’t think it can be blamed for him having perhaps the stupidest acronym of all time, Mobile Organism Designed Only for Killing), the godlike Beyonder (Cosmic Cubes are baby Beyonders, I shit you not), the aptly-named Shaper of Worlds (the Shaper’s an adult Cube – even though he’s gnat-like compared to the Beyonder – whatever), and, yes, the deathgod Thanos (who literally thought Death was sexy even before she was depicted as a goth chick over at DC).
I am almost frightened to contemplate the ways the Cube could affect Marvel film-reality.  Perhaps Hugo Weaving will just use it to give himself consummate kung fu skills.
4. Whatever the Red Skull does, it is likely to be less disturbing than the actions of the mad German scientist in Human Centipede II, who apparently goes beyond simply fusing multiple people together, as in the notorious first film, and does things like sexually molest fused people – and activities with barbed wire that will not be described on this PG-13 website.  I do not condone the British practice of making films apply for licenses to show films deemed obscene, but the straightforward description from their Film Certification Board of what they deemed worthy of quasi-censoring in Human Centipede II makes for amusing reading precisely because their decision is so very understandable.  (If you don’t believe me, I will just note the phrase “masturbates...with sandpaper wrapped around his penis” as a hint.)
5. Intellectual property is one of those things that can cause trouble even without the government being involved, I must confess.  I read that former Marvel editor-in-chief Jim Shooter says the licensing department at Marvel was so stupid back in the 80s that not only did they cause lawsuits by selling the film rights to Avengers and Iron Man separately without realizing the former deal had included the latter character, but they even sold rights to someone called the Amazing Spider-Man and someone called the Spectacular Spider-Man to two different film companies, not realizing they were the same character, thus spawning still more lawsuits.
6. A more nerdy and far more obscure Marvel-related headache is the one I get if I try to figure out why Quasar’s wristbands resemble Capt. Marvel’s wristbands.  Note: the alien Kree created Capt. Marvel’s Nega-Bands, whereas Quasar’s quantum bands were created by the Uranians...who were offshoots of the godlike Eternals...as were the Titanians, but the Kree didn’t create the Eternals, Uranians, or Titanians – the Kree created the separate race called the Inhumans.  Of course, both Quasar and Capt. Marvel were champions in the service of the abstract entity Eon...but he didn’t create the wristbands...or did he...?
And the fact that Quasar started out as Marvel Boy is a mere coincidence...unless it was all predestined by Eon.  (And the fact that Marvel Boy from the alternate timeline created by Grant Morrison was Kree is not relevant either, really – or is it?)  Let us move on. 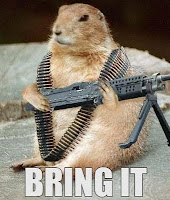 7. Natalie Axton notes that there seem to be many pictures online of groundhogs with militia paraphernalia.
8. For sheer accessibility as a comic book concept, it’s hard to beat Super Dinosaur.  I smell movie potential.  If Spielberg is serious about wanting to revitalize Jurassic Park, this approach wouldn’t be so unlike the unfilmed script John Sayles reportedly wrote – which sounded cooler to me than any actual Jurassic Park movie – in which some of the dinosaurs are altered to have dog-level intelligence and opposable thumbs, enabling them to function as a team of gun-toting commandos.  I’d watch that in IMAX 3D.
9. If we turn instead to genetic experiments on humans, I may be in the minority, but I would prefer using Mila Kunis as a template to using Laura Prepon, if we must pick between them.  Learning that the former likes dogs, root beer floats, and World of Warcraft, whereas the latter is a Scientologist, only strengthens my conviction on this matter.
10. Speaking of eugenics, maybe today (when I’m planning to go see the one-night-only rerelease of The Two Towers, Kip’s Bay 7pm) is a good time to reread both my article from Metaphilm on the X-Men and eugenics and my article from Metaphilm on Lord of the Rings.  (The best thing I wrote for them, though, was probably my piece on fans who obsess over continuity, myself among them – and never more so than in a time when DC Comics is revising the universe.)
Posted by Todd Seavey at 7:43 AM