Conspiracy Week: CIA (per Robert Gates) plus: guns and gold! 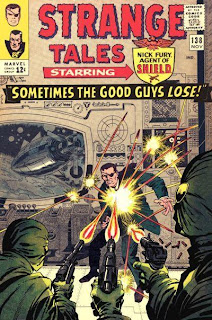 That bastard Richard Nixon did many, many things wrong -- including simultaneously taking the U.S. off the gold standard, freezing wages and prices, and increasing tariffs 10% to boot.

On the bright side, in a world full of unintended consequences, big government reaped a few immediate punishments for these actions, including (A) the creation of the Libertarian Party in part by disgusted anti-Nixon Republicans and (B) a new wave of “gold bug” metal-buying enthusiasts as fervent as the survivalists who were rapidly multiplying in the years after Viet Nam.  Ron Paul first rose to political prominence in that milieu.

Forty-two years later, (A) there’s talk of Paul’s son Sen. Rand Paul being the new thought leader of the Republican Party and (B) today at 10am a young libertarian (from a family of libertarians) with the Ayn Rand-inspired name Anthem Blanchard launched his company Anthem Vault, the first U.S. storage space specifically for privately-traded gold.  The company is fairly conservative/mainstream – financial/investment-minded rather than apocalyptic – in its thinking.  But still: when the whole damn system collapses and you have nothing but your gold and your Bitcoin, you may be grateful for their existence.

But not everything Nixon did was a disaster.  Oh, sure, he made the economy worse, expanded government bureaucracy in several rather left-wing-seeming ways (including environmental and affirmative-action enforcement), and even appears to have secretly sabotaged Viet Nam peace talks before he became president in order to ensure his initial election.  He was a monster.  However, some of his foreign policy maneuvering against the Soviet Union was actually quite savvy.

Or so contends former CIA, NSA, and DoD (but not S.H.I.E.L.D.) man Robert Gates in his revealing 1996 book From the Shadows: The Ultimate Insider’s Story of Five Presidents and How They Won the Cold War.  Now, I know what certain of you are already thinking, which is roughly: “Why on Earth would I believe anything the former CIA director and former Secretary of Defense has to say – you realize CIA’s about to drag us deeper into Syria and was obviously co-running those embassies in Libya, don’t you?”  Fair enough.  And, yes, I was given this book by the smoking-hot granddaughter of an OSS operative (true story).

And then some of you are more specifically thinking, “I wouldn’t believe anything a Bush defense secretary says,” followed by, “Wait – he was also Obama’s defense secretary?” and then you’re all like, “Oh my God, now he’s on the board of Starbucks?  Wait, does that mean he’s in favor of gay marriage?  Does he believe in ‘fair trade’?”  Look, hippie, it’s a complex world and I don’t have time to answer all of your questions, so let’s just get back to the Cold War for now.

Long before the so-called Star Wars anti-missile defense system (a technologically nigh-impossible project Reagan announced thirty years ago this past Saturday, in 1983) and even before the culture-altering 1977 film that gave that project its name (in a year which may also have seen the Dodgers invent the high five, according to Gersh Kuntzman), Nixon subtly changed the world in August 1969 (perhaps in retrospect one of the most pivotal months in history) by shifting U.S. resources toward early anti-missile research – and thereby convincing the panicked Soviets to devote the next two decades to pouring their dwindling funds into efforts to counter our largely-imaginary potential technology.

Not bad (sadly, we’re now in the process of undoing what Gates considers Nixon’s greatest accomplishment, though, which was driving a wedge between Russia and China).

Gates doesn’t just heap the expected praise on later-Cold War, Republican presidents Nixon, Ford, Reagan, and Bush, though.  He makes a fairly convincing case that Jimmy Carter – dubbed “history’s greatest monster” by one Simpsons character – was
a more canny Cold Warrior than he at first appears.

It was largely on Carter’s watch that a disastrous series of dominoes toppled in the Third World, with Marxist regimes taking over countries in Africa and elsewhere – but Gates notes that the Soviets were duly terrified by Carter’s constant emphasis on “human rights” issues, which they saw as emboldening their dissidents and undermining the moral credibility of the Soviet regime.  To many later leaders of East Bloc liberation movements, says Gates, Carter was a source of hope comparable to Reagan.

I’m inclined to think Gates’s is a fairly honest account of his time with CIA and related agencies in part because of when it was written: 1996, at perhaps the most mellow point in America’s modern foreign-policy history, in the all-too-brief pause between the forty years of the Cold War and the decade-and-counting of the Global War on Terror (he would ultimately be Reagan’s Deputy Director of CIA and Bush I’s Deputy National Security Advisor and Director of CIA before writing this book and later become Secretary of Defense for both Bush II and Obama, later joining the board of Starbucks).

There is none of the air of paranoia in this volume that we expect – both within and outside the intelligence/military establishment – prior to 1989 and after 2001.  (I am suddenly wistful for my twenties in a new way, naive though they may have been.)

His approach is relaxed enough to allow him to go into surprising detail about infighting, oddball personalities, and even a fair amount of embarrassed what-went-wrong post hoc explanations for major blunders.  If my failure to see the intelligence community as either James Bonds or SPECTRE makes me sound politically mushy to ideologues of any stripe reading this, rest assured this three-minute video on anarcho-capitalism still describes my own political philosophy.  But even CIA is just another imperfect human institution, neither all-good or all-sinister.  (Though even ordinary cops require careful supervision lest they behave like barbarians, and CIA is far more secretive.  h/t John T. Kennedy)

Some interesting tidbits, just for starters:

•A paranoid CIA high-level staffer who sat in his darkened office spinning anti-communist conspiracy theories and said to one critic, “Well, then, you must be one of them, too.”
•Admissions like this one about the early 70s India/Pakistan clash (contrasting with the usual CIA-as-puppet-masters narrative): “We in CIA remained throughout pretty much in the dark about the machinations of our own government.”
•The time Gates brought a report predicting no likelihood of a Middle East war to his superior minutes after the Yom Kippur War broke out.
•The pain the Church Committee era caused at CIA, in part because their real misdeeds meant henceforth any allegation, no matter how outlandish, would be believed.
•“There was intramural bitterness inside the Agency as analysts and others complained about the clandestine services bringing disrepute onto the Agency.”
•The time Romanian police and diplomats took such delight in giving Gates the bureaucratic runaround that he flipped them off as he got on his plane to fly back to the States.

And that’s all just from the early parts where he’s still fairly low on the totem pole and getting used to the strange world of intelligence.  After that, history really gets made.  (And he writes as clearly as, well, an intelligence briefing or something – or his shadowy ghostwriter does.)

P.S. Given the myriad, often-contradictory conspiracy theories tying the CIA to 9/11, by the way, I can’t help wondering if there are conspiracy theorists out there who simultaneously believe (1) that 9/11 was “blowback,” that is, that al Qaeda is angry Muslims reacting to years of American foreign policy; (2) that al Qaeda was started by or is even run by the CIA; and (3) that al Qaeda does not exist and it was simply the American government that destroyed the World Trade Center.

Because to normal folk, it would seem these things can’t all be true at the same time, you know.
Posted by Todd Seavey at 4:48 PM

I am incredibly proud to be vaguely associated with this post.