Speaking of conspiracies and such: I see that the creators of the page Facebook.com/FindBigfoot very publicly vowed to take the page down and exit Bigfoot research if the dead Bigfoot that one Rick Dyer claims to have stored in Las Vegas turns out to be fake.

Well, already, the related camping/Bigfoot video he claims to have shot in September turns out to use images he’d already used in another video months earlier.  Oh, yeah, and regardless of that he admits to being the same guy who already faked a dead Bigfoot in a freezer a few years before that.  So will the FindBigfoot guys give up soon and all of humanity move on to saner quests?

The full-length Dyer documentary about it all will be shown the night of April 30 at the Hot Docs film festival in Toronto.  One way or another, history may record that it was the night Bigfoot died.

There’s also been zero action over at Spike TV’s $10 Million Bigfoot Bounty blog since it was launched last year, incidentally.  Again: TEN MILLION DOLLARS but no Bigfoot yet.  Makes you think, doesn’t it?  (Then again, Westerners, unlike Africans, only found solid evidence of gorillas circa 1860.  And I’m pretty sure gorillas are real.)

BONUS ITEM: Here is a real photo, though, of a twenty-five year-old Martha Stewart, who did not look like a monster. 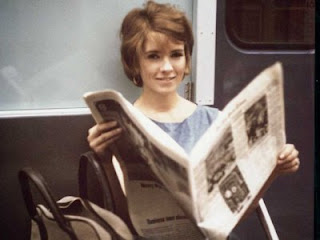 AND IN OTHER FOOT-ORIENTED SUPERHUMAN NEWS: It's looking like the geopolitical scorecard for next year's Capt. America sequel will be: one American superbeing (Cap) and two American/Russian superbeings (Black Widow and Winter Soldier) vs. one neo-Nazi (Crossbones) and – yes – a Frenchman doing kickboxing and (I have long predicted!) parkour: oui, Batroc the Leaper will be played by a UFC fighter, Georges St-Pierre.

So much has changed in the realm of international relations since WWII (and tomorrow: the CIA!).
Posted by Todd Seavey at 5:20 AM