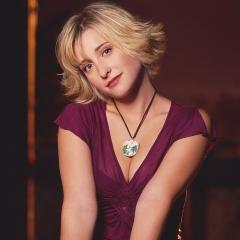 •I met the lovely Allison Mack of Smallville yesterday (and enjoyed the play Apple Cove), and in other comics-type news, I notice that the final issue of DC Comics' latest time-warping miniseries, Time Masters: Vanishing Point comes out this week, on Groundhog Day.  Coincidence?  Maybe due to changes in the time line in their next such series, Flashpoint, they won't yet have failed to go back to not having never not had no alternate timelines now.

•Speaking of repeating things, Darren Aronofsky, I kid you not, had been scheduled to direct a remake of RoboCop before he ended up doing Black Swan (though the latter also sounds pretty Verhoevenian, actually).  I hope all the ballet buffs who enjoyed Black Swan will flock to his next film, also animal-themed, namely next year's X-Men sequel The Wolverine.  From orthodox Jews to addicts to immortals to wrestlers to ballerinas to ninjas -- is there anything Aronofsky can't do?  He also has a Batman comic book coming out.

•Yet I, too, am a Renaissance man (or "dabbleur," if you will): I noted yesterday my impending theatrical/art performance (in Don't Tread on Me, this coming Sunday at 3pm at Momenta Art in Williamsburg), and I am not without past theatre experience.

In addition to acting a bit in high school and college, I took a playwriting course at Brown from Adam Bock, a man who I see has gone on to some success and who makes no bones about his authorial orientation, being quoted as saying: "I’m a gay playwright.  I like being called a gay playwright.  It’s who I am. It’s how I write.  I have a very specific take on the world because I’m gay."  Reading between the lines here, I suspect Bock is gay.

Back at Brown, it occurred to me that Bock looked a lot like a character who was on TV at the time (and held somewhat similar views): namely, Dieter from Saturday Night Live.  (Universal apparently sued Mike Myers for $3.8 million for abandoning his plan to do a Dieter movie because he was unhappy with his own script, which I do not doubt was bad.  However, suffering that financial loss for the sake of his art shows Myers has transcended the cash nexus of late capitalism, fraulein.  Interesting that David Hasselhoff and Jack Black were supposed to be in it.  Maybe one day Dieter could do a cameo in a Bruno sequel.)

For Bock's class, I wrote an absurdist play about Nietzsche (the original Superman writer), as I recall, and I cannot pretend my sensibilities have changed much since.

Adam Bock, though Canadian, was not, I should note, the Brown instructor of mine who had the class watch a graphic video created by the (presumably small) political group Gay Asians of Toronto (note: which is not a Broken Social Scene spin-off band), a video which was supposed to teach me tolerance of gays, Asians, or Canadians, I think, but mainly taught me that men on the receiving end of anal sex do not necessarily look happy.  I draw no moral conclusions from this, though, and have nothing against gays or Asians -- and to celebrate the final day of this blog's "Month of Haters," I will even stop picking on Canadians.  (As always, I really just want budget cuts and deregulation.)

It never hurts to be reminded that philosopher professor Martha Nussbaum (then of Brown, now of Chicago) looked like Robert Plant, either.

And on that odd note: on to the intensely heterosexual "Month of Lovers" tomorrow.
Posted by Todd Seavey at 8:12 AM