Month of Lovers, Month of Liberty 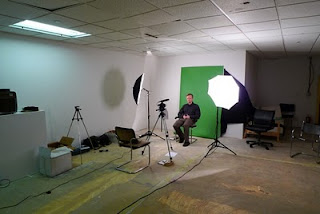 •Lynn Rosen's current play, Apple Cove, contains a reference to the adage about the man who felt sorry for himself for having no shoes -- until he met a man with no feet.

Similarly, I was feeling a bit sorry for myself because of the unexpectedly large modern dance component in Don't Tread on Me, the libertarian/conservative-themed stage performance I'm in (see nearby production still) this coming Sunday (3pm) at Momenta Art, 359 Bedford Ave. near the Bedford Ave. L stop in Williamsburg -- and I was worrying about Superbowl kick-off time, since, smart though my friends tend to be, some of them might still care about sports and thus worry (needlessly) that if they came to Don't Tread on Me they wouldn't get out in time to see the big game.

But then a man reportedly got his leg severed at the 77th and Lexington subway stop in my neighborhood -- which means he can neither do modern dance nor kick a football in the Superbowl (absent prostheses) -- and now everything seems fine.  It's going to be a good show.  I almost wish I could carry that leg with me as a lucky charm now, but director Chelsea Knight is in charge of props.

•Luckily, I will just sort of be swooshing around like Superman rather than dancing in the conventional sense, which makes me a bit like Apple Cove actress Allison Mack's co-stars on Smallville and a bit like the dueling British guys who were up for the role of Superman in next year's Superman: The Man of Steel movie reboot.  Henry Cavill got the nod, but apparently Matthew Goode was considered, which I think would have been strange, since he's best known to nerds as the fascistic Ozymandias from Watchmen, and you don't want to get too fascistic with Superman.

•Speaking of Nietzschean figures, you have to enjoy the story of train robber turned expatriate punk singer Ronnie Biggs, even if you do not approve of him.  He yet lives, but we lost another UK music great this week when John Barry of James Bond score fame passed away (after giving us perhaps the coolest-ever electric guitar movie theme).  And speaking of James Bond scoring...

•A couple of my entries during last month's "Month of Haters" were directed at the so-called PUA (Pick-Up Artist) community, an online society of males who, long story short, try to act like jerks in order to get lots of women to sleep with them, then spend a huge portion of their time insulting other men for not behaving like them (time that you'd think they'd be spending with their lovely girlfriends or wives).

And I don't doubt there are plenty of women who like jerks -- I've seen it with my own eyes, even seen an avowed feminist psychologist fall for "the negs" -- but I also
saw online stats from some ostensibly pro-PUA guy suggesting that PUA masters routinely hit on something like three women per week and sleep with about .4 of them or something like that, which sounds both frenzied and statistically unimpressive to me -- and has the side effect of producing a lot of bitter, arrogant yet whining online commenters to boot.  (And I guess we're just supposed to take it for granted that monogamous long-term relationships are lame, though I tend to find that good people with some depth like them, which may be why the PUA community, by contrast, is full of sad, shallow jerks.)

•I'll grant them this, though: Being (groundlessly) insulted last month by various PUA trolls as a supposedly desperate loser did make me reflect back upon my myriad exes, most of them wonderful women with whom I'm still in occasional contact (only a very tiny few insane, despite the disproportionate number of anecdotes those few provide), all of them won over by my non-patented non-method of seeking intellectual compatibility, telling the truth, and being nice to them (maybe I should write a book about it or teach courses or something).

And so, throughout February, as an upbeat sequel of sorts to January's "Month of Haters," it's the "Month of Lovers" on ToddSeavey.com, featuring a short poem each day (aside from the Book Selections entry and a couple announcements) about a different ex of mine, sans names, in chronological order, totaling eighty-eight lines of poetry, in honor of the New Wave band the Nails, this still being an alternative-rock-friendly site, regardless of where the subject matter roams in the future (robots? scrimshaw?).

It would be ungentlemanly to say exactly how I'm defining "lover," but let's just say it's a simple empirical criterion.  For good or ill, the wholly unrequited fancies will not be touched upon here (though I'm not sure my "failure rate" is as high as the PUA guys' anyway), wonderful though some of the ones who got away -- still friends of mine in some cases -- are.

•I can't help thinking that the "Month of Lovers" theme probably wouldn't go over well in Egypt whether under bland statist censors or possible subsequent Islamist rulers -- but having ElBaradei atop what could quickly become the world's most powerful Islamist regime would certainly be an interesting, ironic, and potentially positive development, especially in regards to nuclear proliferation.  You see what an optimist I am.

•But we unquestionably celebrate freedom on Sunday in Williamsburg!  And the following Saturday in the DC area at the Republican Liberty Caucus -- but another reminder about that as the time approaches.
Posted by Todd Seavey at 11:42 AM

Why did they decide to stage this on Super Bowl Sunday anyway? Not that there's a huge crossover between weird performance art/interpretative dance enthusiasts and NFL fans, but it seems a bit sacrilegious nonetheless.