Todd Seavey Dances in Williamsburg: One Week from Today! 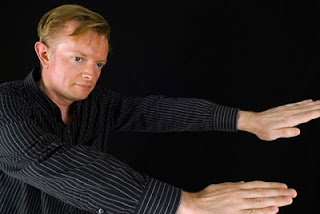 •Why are my arms outstretched like Superman's in the photo nearby?  Is it to celebrate the fact that Allison Mack, who plays Clark Kent's best friend Chloe Sullivan on Smallville, debuts this week in the play Apple Cove written by my friend Lynn Rosen?  Hell, no (though you should go see that).

•Rather, that is a production still of me engaged in modern dance suggestive of Randian supermen, you philistine.  Why?  Because one week from today, on Sunday, February 6 (at 3pm), I will be one of the performers in the multimedia performance art piece called Don't Tread on Me directed by Chelsea Knight, featuring real-life libertarians and right-wingers presenting aspects of their views as speeches and other modes of art, put on at Momenta Art in Williamsburg (359 Bedford Ave.).  Come see the rational dancer.  Come hear me quote from the best speech ever, Reagan's 1964 speech on behalf of Goldwater.

Chelsea has shown marvelous tolerance throughout, trying to capture the essence of Atlas Shrugged, Reagan, and the Tea Party movement even while herself being a leftist raised on some godforsaken commune in Vermont or something.

•If you need still more Rand, she and several other capitalistic authors will feature in my next monthly Book Selections entry, coming up that same day, Sunday one week hence.  Think of it as an unofficial online extension of the day's multimedia experience.

•You can enhance the world's libertarian multimedia options yourself by e-mailing the contact info of movie theatres who you think might be persuaded to show the upcoming (April 15) indie-film version of Atlas Shrugged: Part One to this e-address: theaters@atlas-shrugged-movie.com .  It might not suck.

•Speaking of libertarian film celebrations, Reason posted a video clip about their party at the burlesque club the Box last month, honoring the major First Amendment courtroom victory for John "the Buttman" Stagliano against anti-porn laws, in part over his film Milk Nymphos, and Scott Nybakken points out that you can see me in the lower part of that overhead still tracking shot that occurs right after the opening soundbite (of the Reason clip, I mean, not Milk Nymphos), talking to bespectacled and bipedal conservative commentator S.E. Cupp as well as bald and bearded National Review staffer Kevin Williamson.

•On another multimedia note, here's a pop culture history question I could probably figure out online but will have more fun trying to solve using my friends' and readers' memories (which is sort of apt): Seinfeld aired from 1990-1999, but did the show ever mention the Internet?

Oh, how times have changed if not.  The unofficial ten-years-later reunion episode that occurred "within" an episode of Curb Your Enthusiasm in 2009 doesn't count, although it featured a subplot about George inventing a toilet-locating app and then losing the vast royalties due to having invested all his money with Bernard Madoff -- "Madoff!!"  I think I will buy an iPhone myself this week, in part due to my Mac ownership, which leads me to think that unforeseen compatibility synergies may well arise that wouldn't if I got a Droid, much as I love the name and understand some people's fear of the iPhone touchscreen taking the place of a keyboard.  I am open to counter-arguments.

•Finally, in the realm of installation art, critic Chuck Blake notes these fine pieces by Terry Border of BentObjects (and says, "I like the marshmallow pirates").
Posted by Todd Seavey at 12:27 PM

The only thing that comes close that I can recall was in the famous backward episode, part of which had to do with Jerry's friendship with a woman with whom he had such great conversations that they never moved to a romantic relationship. If I recall correctly, the last scene in that episode (which is to say the earliest chronologically) has Jerry say to himself after one of their great conversations, "What the heck is e-mail?"

I would've definitely come see you do your dance but who planned it for Superbowl Sunday?!