Book Selection of the Month: "Passing Strange" by Joseph A. Citro 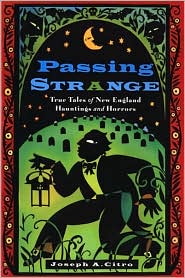 ToddSeavey.com Book Selection of the Month: Passing Strange: True Tales of New England Hauntings and Horrors by Joseph A. Citro


You might say this irrational, dopey, trashy volume about New England -- which I read while traveling there last month -- is an antidote to literally half of my Book Selections for last year (links to which I promise to fix soon, along with twenty other things), about half of them having been about or by the British and inclined toward rationality.

The two things that most define me are of course regional pride and belief in the supernatural -- no, wait.  I don't care about either of those things.  Nonetheless, I thought it would be interesting to read a collection from my native New England of tales of the supernatural, a reminder it's not all just minutemen and rationalists up there.  (We're also uptight Puritans, liberal Ivy Leaguers, Red Sox fans, and scrimshaw aficionados.)

Besides, I've long thought (in a no doubt culturally biased way) that New England is the perfect setting for supernatural tales, since it's the region where the New World was most clearly still rooted in strange, extreme forms of Old World religious belief.  Freedom may in some sense have been born in New England, but a century and a half earlier, they'd cut your ears off there if you blasphemed on Sunday.  Really.  The Taliban would have been fairly comfortable in New England four centuries ago, though conservatives don't tend to like thinking about it that way.

Too, the sparseness of the environment -- so little history compared to Europe, except for those bitter Native Americans lurking in the woods -- and the dour image of the Puritans both lend themselves well to notions of late-night chain-rattling as punishment for unwholesome thoughts, etc.

I remember being young and not yet skeptical and thinking that the Connecticut woods seemed all too plausible a location for a ghost sighting (or perhaps Bigfoot attack) compared to, say, downtown Chicago or Paris.  The Blair Witch Project may have taken place in Maryland but would have worked perfectly if set in rural Massachusetts.  And for those in distant lands unsure about the definition of "New England": it's precisely the six states of Maine, New Hampshire (where my dad grew up), Vermont, Massachusetts (where I visited friends and philosophers last month), Rhode Island (where I went to college), and Connecticut (where both my mom and I grew up) -- but not, for instance, New York (where I now reside).

In any case, this dopey book of New England ghost stories and creature sightings, which
I read while traveling to and from last month's American Philosophical Association convention in Boston, ended with a report about a (purportedly real) talking cat.  Oddly enough, I encountered a real talking cat in the lonely house where I was staying -- and cat-sitting -- during the philosophy convention.  I kid you not, I woke up around 3am and was amazed by how much it sounded as if my charge for the week -- a beefy, bobtailed, black and white feline named Fredo -- was saying "Hello" over and over again.

Only when Fredo's animal-loving and green-inclined owner, prolific writer Pagan Kennedy (good name for a Massachusetts dabbler in witchcraft, though she claims not to be one), got home at the end of the week did she reveal that, completely unbeknownst to me, she has long been trying to train the cat to say "Hello," and succeeding with eerie flying colors, if you ask me.  But I adore Fredo anyway.  (If this story leaves you hankering for cats, by the way, I recommend this site, which certainly delivers what it promises: CatsInSinks.)

I do not conclude from my Fredo encounter that forces beyond our ken are at work in the universe (though it is interesting that Pagan says Fredo has never been photographed).  If I were as stupid at the intended audience of Passing Strange, though, I probably would.  All I will say, as one simple example of how gullible people are when hearing tales of the supernatural, is that it's uncanny how many people are not alerted to possible fishiness in stories (about ghosts, aliens, Men in Black, demons, etc.) when they begin "I was lying in bed asleep one night" and end "somehow woke up back in bed in a stupor almost as though nothing had ever happened" (HINT!! HINT!!!).  But I've seen Fredo even while awake in the middle of the day, remember, and so has Pagan, so he probably exists.

(Another sign that non-supernatural explanations tend to be ignored even when close at hand: all those "poltergeist" stories in which the "mysterious" force moving small objects around the room seems somehow to have become associated with a young, mischievous child living in the household.  Duuuuuh.  Must be ghost n' gods n' space aliens n' everything out there.  B'dawwww.  Me go join church now n' hire me some exorcismers.  Den me stick hand in light socket.  Weird pain!  Save me from the space aliens, Jebus!  NOTE: In this paragraph, I have endeavored to convey, through the adoption of an argot suggestive of low intelligence, my contempt for believers in the supernatural, who are cretins.)

On a related note, I strongly endorse the BBC adaptation of Douglas Adams' Dirk Gently's Holistic Detective Agency (which Chuck Blake was nice enough to show me), even though it did not contain a funny skeptical joke from the original novel, which was con artist/detective Gently subtly nudging people into believing that he has supernatural abilities simply by occasionally denying that he has supernatural abilities.  The decades-old novel translates well into Psych!-era TV comedy.  And I'd be interested to hear how many people who are unfamiliar with the novels actually figure out before show's end what the deal is with the cats in that first story.

Before watching Dirk, I picked up a copy of Macaulay's History of England at Borders, in part because I'd heard that store may be closing -- and you'll hear what I have to say about the book in a future blog entry.  Hmmm.  Come to think of it, I ended up mentioning rational, progress-oriented Brits in the final two paragraphs of this entry after all.  Well, everything is connected.  Tomorrow: my connection to Jonah Goldberg.
Posted by Todd Seavey at 7:42 AM