•I don’t mind seeing the establishment get hit with a bit of anarchism from both left and right, nor do some of my pals who will be at Cooper’s Craft and Kitchen rooting for the fellow in the adjacent photo during tonight’s 8pm Eastern GOP debate (that’s Ron Paul at last month’s Webster Hall event, who was being watched by the crowd seen in my next blurry photo, below).  It beats a stale tug of war between neoliberal bureaucrats and neocon corporatists in some ways. 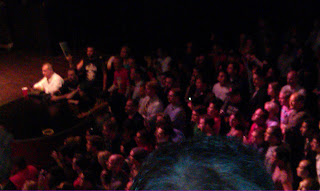 But lest we get too soft on the OWS people: remember, while they may be right to fear the ways in which the financial sector can write regulations and score bailouts to help itself to more than its true-free-market share of the pie – and while they lament the 1% that controls a disproportionate part of American wealth – there is an institution controlling this country that controls about a quarter of the entire national income and is controlled by a mere 535 people, selected by a process even less voluntary and flexible than the market processes that (for the most part) elevate the wealthy: I mean the federal government.
WE ARE THE 299,999,465 (roughly) WHO DO NOT SIT IN CONGRESS – and whose money gets thrown down the crapper nonetheless.  Why this does not stir, I do not know.  I mean, aside from the fact that very few people know economics.
•I don’t know if Herman Cain – current favorite of the (horribly racist) Tea Party-affiliated voters – will use the Tea Party/OWS fusion slogan I suggested – “We are the 999%” – but there’s a grain of truth in it.  Simplify the regulatory and tax structure and just watch those billions get redistributed the natural way, through market processes and without government intervention.  Start making that point more and that’s how you generate more people like the Ron Paul-admiring young fellow in an Anti-Flag t-shirt seen in the nearby photo, which is basically my plan for rescuing the culture, as you know.

•Another 90s-esque GOP candidate, Newt Gingrich, finally got around to invoking a new version of the Contract with America he helped craft back then, but weirdly Gingrich’s ten priorities now include: research diseases of the brain (including Alzheimer's and Parkinson’s).  This is either a very odd choice for such a short list or a brilliant ploy to appeal to both older voters and deranged zealots.  (Or if he just ends up accused of being influenced by pharma money, it wouldn’t be the first time.)
•Despite Christie’s endorsement raising the prospect of the reassertion of the old Northeastern Republican establishment (there used to be one, I swear), there must be a lot of stress in the Romney camp over when Iowa holds its primary.  It’s a state that’s still fairly undecided, so it going first could mean a surprise primary victory by Perry, Cain, or even Bachmann (or if I had my way, Paul or Johnson) – but by contrast, Romney (as former governor of Massachusetts) has New Hampshire (which is likely voting on January 3) all sewn up, with about 40% support vs. everyone else’s single digits or so.  If New Hampshire votes first, Romney likely cements his status as Mr. Inevitable.
•And Bill Keller says Perry is dumb.  Imagine if Keller were still Times executive editor after a hypothetical Perry nomination.  I suspect his views might affect coverage.
•So, are these OWS people crazy?  Well, despite the
oddly-recurring tendency on the left to do zombie-themed protests, I don’t think they’re all that nuts.  And as Ali Kokmen (who’s moderating a panel Saturday morning at New York Comic Con) points out to me, even NPR has reported on the libertarian element in OWS, though some are using the “libertarian” label in the almost-opposite (and more European) Noam Chomsky sense of the term, as in “libertarian socialist.”  (Could Chomsky be more wrong in that clip?  And this guy’s an expert on language use.)

Even when you’re done sorting out all those divisions, though, there’s bound to be some residual craziness.  Kyle Smith notes this prescient quote from George Orwell, over half a century ago:
The first thing that must strike any outside observer is that Socialism, in its developed form is a theory confined entirely to the middle classes. The typical Socialist is not, as tremulous old ladies imagine, a ferocious-looking working man with greasy overalls and a raucous voice. He is either a youthful snob-Bolshevik who in five years time will quite probably have made a wealthy marriage and been converted to Roman Catholicism; or, still more typically, a prim little man with a white-collar job, usually a secret teetotaller and often with vegetarian leanings, with a history of Nonconformity behind him, and, above all, with a social position which he has no intention of forfeiting. This last type is surprisingly common in Socialist parties of every shade; it has perhaps been taken over en bloc from the old Liberal Party. In addition to this there is the horrible—the really disquieting—prevalence of cranks wherever Socialists are gathered together. One sometimes gets the impression that the mere words ‘Socialism’ and ‘Communism’ draw towards them with magnetic force every fruit-juice drinker, nudist, sandal-wearer, sex-maniac, Quaker, ‘Nature Cure’ quack, pacifist, and feminist in England. 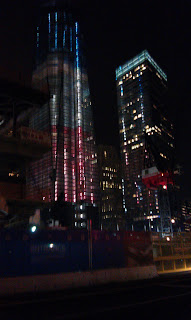 •Some of that crazy is on my side of the (increasingly messy) aisle nowadays, thanks in part to the conspiracy theory types among the Ron Paul fans (some of whom famously think a government plot led to the rapidly-rising Freedom Tower seen in the pic nearby that I took at Ground Zero recently).  And I should probably be very nervous when the conspiracy theorists become so comfortable with their newfound popularity that they use phrases like the one I’ve bolded in the third sentence here, from the blog of someone called DJOsiris:
As I previously pointed out, the "Occupy Wall Street" movement has been created & hijacked by the elite. Their self appointed leaders yesterday called for the re-election of Barack Obama and now are calling for new tax regulations that will do nothing to balance out the massive wealth of the rich elite and instead will target middle class America and small businesses. Even mainstream conspiracy sites are reporting about the infiltration when previously they totally supported the movement. 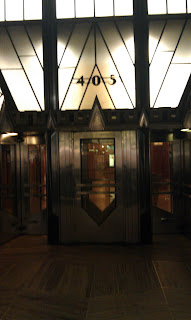 •But there is ample non-crazy room for common ground, and indeed tomorrow (noon in front of the state capitol) sees a protest in Albany against corporate welfare, co-sponsored by the Tea Party (and led by James Ostrowski, the New York State Libertarian Party guy who was pushed aside by Howard Stern’s gubernatorial nomination in 1994, with me thrilled by the move at the time, given the need for PR and all, but still plagued by some feelings of guilt – but you can talk to him without mentioning Stern by e-mailing JamesO@apollo3.com or calling 716-435-8918).
Here’s to a New York that’s a bit less like Albany and a bit more like the dynamic spirit behind the Chrysler Building (my favorite building in NYC, seen in the pic nearby).  As an anarchist-atheist friend of mine likes to say, the Chrysler Building is such a beautiful testament to what humanity can achieve (and achieve tastefully even while celebrating manufacturing, cars, and gargoyles) that you just look at it and know with exultant certainty that there is no God.
Posted by Todd Seavey at 3:22 PM