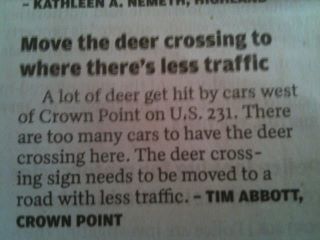 •Yesterday’s slaughter by police of dozens of escaped exotic animals in Ohio was sad and bizarre (and this is NOT actual footage of the wolf and monkey who remained the only free animals at one point near day’s end).  Still, I know my hardcore vegan friends Diana Fleischman and Ian McDonald would likely say it’s just one of the more-visible examples of the horrors humans inflict on other species every day.  You can listen to their inaugural vegan podcast here.  It’s called The Vegan Option.
•I think animals are pretty stupid (even Maru) – and I say that without any resentment – and that their suffering is thus far less rich and significant than ours, but it’s not completely morally irrelevant (a pain-registering neuron matters, but it is not the case that all neurons are equal regardless of their larger mental context – that would be like saying A always equals A, despite radically varying sentence complexity, which is patently absurd).
•Mr. Spock on Star Trek is supposed to be vegetarian, though, and he’s a pretty logical guy.  The actor playing the current version of Spock is also gay, it has been revealed, though it is not technically necessary to be gay or alien to be vegan.  Here’s hoping “Live Long and Prosper” replaces “It Gets Better” as the new slogan for tolerance.  I’d call those slogans sort of libertarian and progressive in tone, respectively.  The conservative slogan would be “Well, It Could Be Worse.”
•Chris Nugent pointed out this awesome, brief footage of an African antelope accidentally taking out a biker, which some vegans might enjoy as a case of turnabout.
•I’m sure Diana would normally enjoy the Story Collider science podcast, too, but Diana’s an evolutionary psychology lecturer, and right now, they’re running the anti-e.p. speech that I recently witnessed by angry feminist blogger Amanda Marcotte, who makes e.p. sound very stupid by exaggerating its claims.  I don’t think you can quite hear me booing at the end.
•And thank you to Ivan Cohen for pointing out the silly and admittedly speciesist reader suggestion to a newspaper seen above.
I’m in DC over the weekend, remember (catch me for drinks Saturday night or brunch at Vermillion on Sunday at noon), and shall blog again on Tuesday.
Posted by Todd Seavey at 7:46 AM

Speaking of animal-related news pegs, I have to give the Federalist Society credit for its witty reaction to an L.A. Times story about a PETA lawsuit against Sea World.

The L.A. Times reports that People for the Ethical Treatment of Animals plans to sue Sea World for violating the 13th Amendment--which bans slavery--by keeping killer whales at parks in San Diego and Orlando.

Do you think Sea World should respond that the whales are actually in prison for having murdered seals?

You can assign any writing & editing task for our professionals. Our team helps students with any subjects, levels and https://essaysrescue.com/essaywriter-review/ academic papers. Be completely sure everything is confidential! Each order is kept private, and communication always stays anonymous. Download and remove your copy from the database if you want to.