Halloween for Stormtroopers, Steampunks, and Swimmers 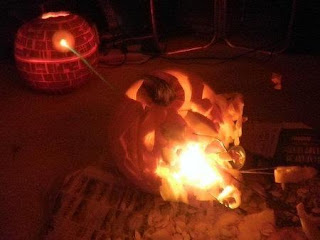 I may finally check out the steampunk haunted house downtown tonight – but nothing can be as scary as having your whole planet destroyed, as is depicted in the photo above from George Takei’s album (pointed out by Angel “Voluntaryist” Robinson).  Chuck Blake notes photos of other Death Star jack-o-lanterns here.
And if you thought the most exciting part of that paragraph was the phrase “George Takei,” maybe you should watch the PBS series America in Primetime, which my friend Courtney Balaker helped produce, tracing the history and evolution of major character types and themes on TV (it started last night and airs on four successive Sundays).
I hope the show will address the fact that we have progressed in this fledgling century from being a society that only airs watchable material in animated form on Sunday nights on Fox to being a society that only airs watchable material on the late-night Adult Swim block on Cartoon Network.  (But anything by libertarians on cable or Reason.TV is also OK.)
Posted by Todd Seavey at 10:41 AM

Email ThisBlogThis!Share to TwitterShare to FacebookShare to Pinterest
Labels: Sci-fi and such