•In a seven-day period, I unexpectedly bumped into both National Review’s John Derbyshire near my local FedEx store (Thursday last week) and that guy from Occupy Wall Street who carries the “SHIT IS FUCKED UP AND BULLSHIT” sign (this past Wednesday night), proving I transcend the conventional right-left spectrum (a power that will come in handy in the turbulent days ahead, mark my words).  L.B. Deyo reminds me that he is the proud owner of a John Derbyshire “Pop Culture Is Filth” coffee mug.
(Also heard from the likes of Jonah Goldberg and David Frum in DC and James Poulos here in NYC, and none of them seem to think pop culture is filth, though Frum clearly does not trust the masses, not even the Tea Partying ones, alas.)
•The sign guy is the second OWS “celeb” I’ve bumped into without planning it (the other being Ted the Crazy Pants Guy, who led a call-and-response downtown about the Constitution – and went to Ron Paul’s last Webster Hall rally, where he told me he’s an “asymmetric paternalist,” sort of a Cass Sunstein type but with pants).  The sign guy was one of many luminaries at the book release party for Rev. Jen Miller’s memoir Elf Girl (about being an elf-ear-wearing Lower East Side writer and performance artist).  Also present was large but shrinking comedian Angry Bob, who I have to admire for having once started a joke with the maximally-un-p.c. intro “However you may feel about Hitler...”
•Rev. Jen isn’t the only one with a can of PBR, by the way.  Below, along with pics of many things mentioned in this entry, note my photo of perhaps the most self-consciously hip juxtaposition of objects possible: a can of PBR sitting atop a Reservoir Dogs action figure, decorating the counter at the restaurant Crif Dogs, just in case you weren’t sure of their cultural allegiances.
•Speaking of OWS and strange lifeforms, it amuses me that the real-life vampire squid is arguably more frightening than the metaphorical one popularized in the overheated anti-capitalist prose of Matt Taibbi, since its Latin species name actually means “vampiric squid from Hell,” as if being a vampire weren’t bad enough already.
•I finally paid a visit to OWS central command, Zuccotti Park/Liberty Square, on Tuesday night, and the call-and-response chant they were doing just as I arrived was, I suppose, clear evidence of democracy in action: “We do not use Robert’s Rules of Order!”  “WE DO NOT USE ROBERT’S RULES OF ORDER!” “We use consensus!”  “WE USE CONSENSUS!”  I think I was more impressed by the three-day left-anarchist book festival I went to at NYU four years ago, which the press didn’t even notice, than I am by this small block of pup tents.  (Fred Siegel – not to be confused with the guy at OWS dressed like Santa Claus – skewers OWS here.)
•OWS was a side jaunt after a visit to World Trade Center 7 (the new one, not the one destroyed by Middle Eastern terrorists and obsessed over by gullible conspiracy theorists), the fortieth floor of which is home to both (A) the most spectacular view currently available of downtown Manhattan (including both the beautiful Woolworth Building and that mega-modern new metallic twisty thing going up near it) and (B) New York Academy of Sciences events such as Tuesday’s screening of a documentary about the fight between scientists and creationists over evolution (where for the first time I met evolution defender Eugenie Scott, who’s so sweet she even had a few nice words for the Discovery Institute, aside from their intelligent design-promulgating project, as well as for the living embarrassment to Brown University conservatives that is David Klinghoffer).
•On another evolution note, I helped spark a blog entry by an evolutionary psychology researcher (and some discussion among his colleagues) denouncing Amanda Marcotte for misrepresenting that field in her frothing feminist rage.  On a de-evolutionary note, oddly enough, American Conservative editor Dan McCarthy informs me that the Devo song “Whip It” was written by Mark Mothersbaugh as a Dale Carnegie-esque pep song for then-president Jimmy Carter in response to European criticism of U.S. foreign policy.  It’s a weird (and wiggly) world.  (And an amazing video.)
•Roseanne Barr tweeted at me a couple days ago during her spat with William Kristol over the role of their fellow Jews in capitalism and politics, which in turn reminds me that the moment I really stopped giving George Lucas the benefit of the doubt, despite his
many crimes, was when a big-nosed character in Attack of the Clones intoned “The Intergalactic Banking Clan will support you.”  The hell was that about (aside from Lucas’s misdirected and all-pervading resentment at the businessman father who didn’t want him to become a filmmaker)?  Last I knew, Lucas had been called for jury duty in Marin County with a friend of a friend of mine.  But he should be on trial, plainly.

•On a somewhat more mainstream political note, I now suspect serious, Reform Party-level insanity in the Herman Cain campaign – not so much because of the notorious ad starring his smoking campaign manager (though smoking is idiotic and deadly and ought not to be encouraged) but because of Cain’s Mobius-strip-like incoherent response to an abortion question on Stossel, pointed out to me by Michael Malice (and I say this as a guy with no strong position on abortion, mind you).  At least Romney takes a few years to flip-flop.  Cain does it within a single sentence.
•The astonishing capacity for GOP candidates to rise and quickly fall this season is partially captured by this amusing set of headlines juxtaposed on RealClearPolitics the other day:
Romney Falls to Earth - Alana Goodman, Commentary
The Real Winner Might Be Newt Gingrich - Ed Morrissey, Hot Air
Romney The Only Credible Nominee - Ross Douthat, New York Times
Obi-Wan: It May Come Down to Gingrich and Perry - Jim Geraghty, NRO
Indeed, I not only have to retract my own recent prediction of a Romney/Cain ticket given what I now suspect is the latter’s incoherence but must already retract my tweeted prediction that Gingrich would replace him as the second place guy in the polls (and thus possible v.p. candidate), since it now appears the two-man Gingrich-Cain debate on Nov. 5 (which I predict will go very badly for Cain) will not be televised.  If Cain falls in the debate and almost no one sees it, it may take a few states voting before he fades away.
I think he will fade away, though.  Brains matter – yes, even to us Republicans (Romney and Gingrich faring well is in some sense a testament to that, as is the once-mighty Perry so quickly falling behind Ron Paul).  And so confusion lingers.  And non-conservative Romney coasts along, his 20-something percent of GOP voters as rock solid as Ron Paul’s 9%.
•I will say this for Perry, though: A flat tax would be great, and it still galls me that the press loved the idea back when Jerry Brown was pushing it in 1992 and then hated it four years later when Steve Forbes was pushing it, a great example of how partisan they are.
•Educating people about economics will mean not only the occasional spectacular event like Peter Schiff arguing with the OWS protesters downtown but also tireless efforts like those of economist Don Boudreaux, who constantly dashes off letters to the editor like a recent one complaining about a James Livingston NYT column.  Livingston leapt from the fact that the investment-to-GDP ratio is poorly correlated with overall economic growth to the ludicrous – but very politically convenient – conclusion that consumer debt and government spending are the real spurs to growth.  Yeesh.
•I don’t know if he’ll get voted off the island, but Rupert Boneham is running for Indiana governor, I am informed by Ali Kokmen (who himself hails from Minnesota, where wrestlers can become governor and comedians become senators).  Boneham is running on the Libertarian Party ticket, is famous, and is widely despised.  Well, it’s worth a shot. 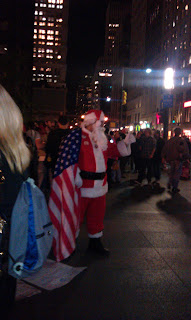 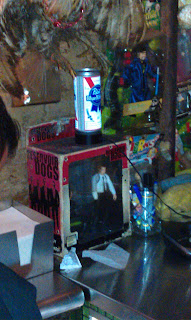 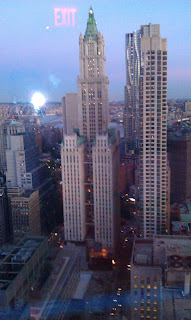 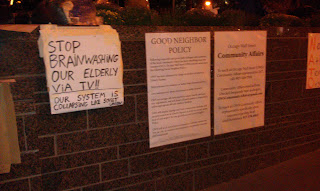 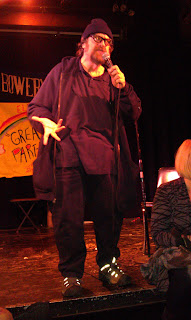 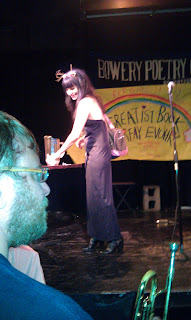 Speaking of the now iconic "shit is fucked up" guy, I was actually marching ahead of him in the Village Halloween Parade earlier this week. He was dressed up as an old timey prison inmate, although I'm not sure what spurred the costume choice.