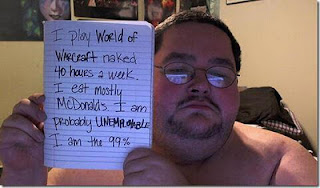 Stop me if this entry starts to sound nerdy, but a friend of mine who is an architect...and a libertarian...tells me he was walking in Harvard Square...and saw a woman doing an excellent “living statue” performance...and she turned out to be Amanda Palmer, lead singer of the band Dresden Dolls...which is explicitly steampunk-influenced...oh, and she’s married to goth comic book writer Neil Gaiman.
I love it when subcultures overlap – but not enough to want to participate in global “Occupy” protests this weekend.  Instead... 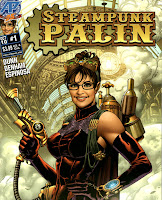 Despite the risk of seeing a lot of guys like the one in the photo above (pointed out by Evan Isaac – though it is not Evan Isaac), I am going to New York Comic Con today.  This will be the first time in many years I’ve gone to a comics convention. 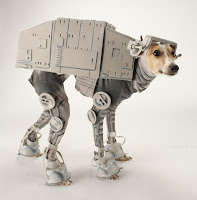 And I will tweet about it, so FOLLOW ME ON TWITTER starting around noon.  (You can just read the tweets on that page even without being a Twitter user, by the way.  Heck, you could read my tweets all the time.  But it takes only moments to sign up – it’s the online place Where You Spew What’s True.)
Instead of buying back issues or getting autographs from famous comics artists, I’m mainly there to gawk at weirdoes in costumes and attend some of the stranger panels, such as the ones about steampunk (which likely will not mention the obscure comic Steampunk Palin...unless I ask about it).  All right, I may dress like John Constantine, but that’s not much of a stretch, really.
•••
I did read one wonderful comic recently, though: Grant Morrison’s All Star Superman, now available in a single paperback volume and depicting Superman’s Herculean efforts to accomplish great deeds before his imminent death.  It balances crazy-1950s-style broad strokes (like the Moon getting split in half, an army of Bizarros trying to build a rocketship, and Superman competing with Samson and Atlas for Lois’s affection) with enough Kubrick-like wonder and hip intelligence to make it moving at times.
(And remember: you can read my review of Morrison’s book about the history of superhero comics on Reason.com.  On another libertarian note, I’m pleased to hear that real-life superhero Phoenix Jones will not be prosecuted for intervening in the fight seen in this video.)
If I’m on a real geek roll, maybe I’ll see The Thing this weekend, too – the somewhat oddly-titled prequel to...The Thing.  The dog above who’s giving new meaning to the phrase “dog walker,” pointed out by ComicsAlliance.com and Jacob Levy, is not a hideously-transformed sled dog from the film, by the way (nor is it the dog of my fellow convention-goer, Natalie Axton).  Comics Alliance also did a fine job with this superheroic parody of the Occupy Wall Street protests (pointed out by Franklin Harris).
By contrast, of course, Fox News is...taking OWS seriously and finding common ground – or at least that’s what my old boss Judge Napolitano is doing in this brief interview with a teen protester from downtown.
•••
And that brings us to Glenn Beck.  Beck is now free of Fox’s constraints (as far as I know, he wasn’t fired – and neither was I, by the way).  He left to found
his own online channel, and I hear he’s getting more...survivalist.  Having explained on cable for years how the conspiracy is undermining civilization, he is now, on his online TV network, encouraging living near farmland and re-learning lost skills such as canning – but above all fostering local community ties – in order to survive when things fall apart.  I’m guessing he’ll also be hawking his own line of survival gear if he isn’t already, though I don’t doubt his sincerity.

And the green anarchists – and many of the hipster-steampunks – will agree with him on the keep-it-local DIY stuff, of course.  Sadly, I think this just defeats the whole purpose of having a modern economy.  Let us hope we do not reach the point where one has no recourse but to visit the central planning commission if one wants to find people who still believe in the interconnectedness of a vast, economically-interwoven civilization.
I’ll go arch-modernist on you in a diesel-powered heartbeat, America, if you all start trying to grow your own potatoes and inefficiently struggling to power your entire house with cat poop or something.  Having every back-to-the-land hippie across the political spectrum from Rod Dreher to Tarzan on your side will not save you from my wrath if you give up on economies of scale and the specialization of labor.
•••
Not that economic success is everything.  Cracked.com (which has somehow gone from being the website of that magazine that wasn’t quite Mad to being a source of quality journalism, like a piece Laura Braunstein pointed out on the sad necessity of burning lots of old books to dispose of them at libraries) recently ran a story about how stats suggest that keys to workplace success are (for females) being less attractive and (for males) being – I kid you not – fat, drunk, sexist, mean, and mustachioed.  So at some point you need to ask yourself how badly you really want to be a success at work (then again, Carl does seem to have a system worked out).
Speaking of facial hair and creating economic prosperity, apparently Ron Paul is now being mocked because his fake eyebrows were noticeably falling off during last week’s debate.  We will all suffer if this drives his poll numbers even lower.
And so, as Hegel foresaw, history proceeds as a perfect dialectical expression of pure Reason.  My tweets today will be an important part of that process.
Posted by Todd Seavey at 1:28 AM