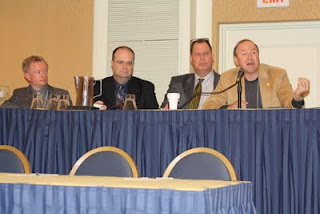 1.  The Atlas Shrugged movie’s out today (actually, Atlas Shrugged: Part 1, of a planned trilogy, and I’ll see it tomorrow at 4pm at AMC Empire 25 – and tweet about it right afterwards; all are welcome).  More than one person has asked me the heartbreaking question “Is Angelina Jolie in that?”  No, she is not.  Almost no one is.
The rights had been bouncing around on a short-term basis between various producers for years, without all the necessary pieces quite coming together at the same time (star availability, money in place, etc.), until finally one rights-holding producer (an actual libertarian), faced with the prospect of the rights lapsing, finally said, screw it, I'm making the movie, and he scraped together a paltry $10 million or so (you and I should have chipped in) and a cast of unknowns and near-unknowns, with lead Dagny played by Taylor Schilling from a short-lived nurse drama on TV called Mercy, and started shooting.
The scriptwriter is a guy who normally writes horror and reviews videogames – and I’m actually hoping all this just keeps them humble and lets authentic bits of Rand dialogue carry the day.
And if it’s crap, they can always remake it in ten years – we’ve been waiting fifty-four as it is, so another decade probably won’t kill anyone, I mean unless civilization collapses.  Nowadays, you only have to wait a few days to remake something anyway.  Witness the all-new Amazing Spider-Man with a teenage Peter Parker and no Toby Maguire coming out next year – not to mention the three completely different versions of The Punisher, all lame, that they did over the past twenty-five years or so.  And had Darren Aronofsky not made Black Swan, you know, he was scheduled to remake RoboCop.  That scares me a little too.  (He’d be shooting a Wolverine movie right now had he not bailed recently on the idea of going to Japan for a year.)
2. Because of the centrality of trains to this tale of resisting regulation, there will be inevitable comparisons to The Little Engine That Could and, more interestingly, Thomas the Tank Engine.  Thomas certainly has a pro-work and pro-morality message, but it is far less about individualism than about duty within a sharply proscribed British/talking-train class structure.
A John Galt the Tank Engine book might be the best tool for fostering fusionism in the young, but then, I have begun to question whether we have time for any (inherently long-term) social-conservative strategies when faced with imminent economic collapse and so favor clear-cut, radical free-market arguments more than ever.
3. Then again, this video montage of people nearly getting hit by cars and the like is a short, vivid reminder that luck does play a big role in determining one’s station in life.
4. I don’t know whether the film will have much time to devote to Rand’s atheist views, but this Onion piece captures the fundamental stupidity of supernatural claims and the gullibility of those who believe them.  For the first time in my life, I also nowadays operate under the assumption that religious people, even the traditionalists, will tend to have worse morals than secularists.
5. The comic book writer/artist Steve Ditko (co-creator of the aforementioned Spider-Man) left Marvel decades ago to do Rand-inspired comics and is still doing them.  One of his characters, the Question, became the basis for the deranged vigilante Rorschach in Watchmen.  The Question (with Rorschach-like touches) may soon be written by left-anarchist inclined Grant Morrison, who says he wants to ditch the Rand Objectivism in favor of making the Question an adherent of the philosophy called Spiral Dynamics.  I think that would be a mistake, and DC Comics does not need yet another hero devoted to the idea that states of mind have colors associated with them (more on Green Lantern tomorrow).
As is often the case, when I first heard of Spiral Dynamics, I imagined
something more interesting than what is really the case, that is, a (much-needed) historically-aware philosophy that consciously adopts only the best parts of previously-existing philosophies in order to foster a sort of ongoing grand fusionism – in which previously-opposed schools of thought are reconciled enough to allow inquiry to move forward to new topics and intellectual horizons – which might even be how some Spiral Dynamics adherents would describe the philosophy...but they would also assign colors to the phases of philosophical history for easy memorization, and that’s a sign you’re better off just talking to me.  And, naturally, they want it all to lead up to non-competitive environmentalism or some such nonsense.

6. A good WSJ piece recalls Rand’s shaky relationship with the right.
7. I have not (yet) given a speech that has reshaped civilization like John Galt’s, but above is a pic of me addressing the Republican Liberty Caucus two months ago (or rather, listening to Murray Sabrin do so), which I’m snagging for use to compensate for its mistagging on Facebook as a picture of Lainie Frost (who is related to neither X-Men character Emma Frost nor Iron Man character Whitney Frost and in any case is certainly not me, though it would be no dishonor to be her).
8. This quote from P.J. O’Rourke’s ambivalent review of the Atlas movie is one of many comments about the film from the few who’ve seen it already that make me unsure whether I’m going to hate it or like it as a sort of camp (Rand camp, you might say): “The rest of the movie’s acting is borrowed from Dallas, although the absence of Larry Hagman’s skill at subtly underplaying villainous roles is to be regretted.  Staging and action owe a debt to Dynasty – except, on Dynasty, there usually was action.”
9. Speaking of soap operas, Mom will be devastated by the news that All My Children is ending in September, but at least before the announcement of its cancelation, Brooke English left town happily reunited with sometime-villain, sometime-antihero businessman Adam Chandler, who I always thought looked a bit like Darkseid and who, according to Mom, once asked of Pine Valley, the town in which the series is set, “Doesn’t anyone in this town read Ayn Rand anymore?”
10. And I will make my way from the gleaming megalopolis of New York City north to the headquarters of FEE (the Foundation for Economic Education) on a 6:20-7pm Metro North train after the film tomorrow, during which time, if all goes as planned, you’ll see my reactions on Twitter, so follow me (on Twitter, not on the train, which would be weird).  If the train is delayed in any fashion, it is time to abolish government.
Posted by Todd Seavey at 8:02 AM

On some level, it makes me sad that in ten thoughts about Atlas Shrugged that touch on comics, none of them are about the overlooked early 1900s comics Ayn Rand/music industry mashup that is Elvis Shrugged.