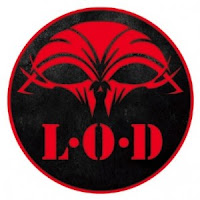 (On Facebook yesterday, when not joking about an unhappy young Ivy League woman, I continued my somewhat-related Narnia comments begun in yesterday's blog entry -- causing someone to point out, rightly, that the Narnia movies aren't very good.  I know, but I just want to see the evil ape in the final story.  He's a false prophet -- and he's an ape!  What a cool character.)
Well, marketing analysts at DC Comics in mid-century noted fans' love of apes, fire, and the color purple, notoriously resulting in a brief period when DC would come up with almost any excuse to put flaming purple gorillas (and the like) on its covers.  Here's one particularly bizarre example.
If consumers demand apes, the market will supply them.  We must not be silent, with our voices or our dollars.  Indeed, I will conclude the "Month of Heroes" with an important ape-related link one week from today.
•••
In the meantime: the site Newsrama asks why only DC Comics' top-tier books (mainly Batman and Green Lantern nowadays) sell well whereas Marvel has a fair number of "mid-list" titles instead of just a few heavy-hitters and numerous low-sellers.  (DC makes up about 31% of the comics market and Marvel about 45%, and things have been more or less that way for a long time.)  The writer of the piece says it doesn't seem to be quality -- though I'd note that Marvel does seem to use far more realistic, polished art than DC (Dan Didio's fault, perhaps?), making even the blandly-written Marvel tales look almost Alex Ross-worthy in recent years.
But I think the real explanation is a deeper, more intrinsic one that's been true for a half-century now: With DC, you basically know which characters really matter -- which ones are the aristocracy of the superhero world, as it were -- and you know you can safely ignore the rest because they're rarely the ones who change the world.
You know the Justice League is the center of the DC Universe; its most familiar characters are the superstars likely to get their own movies; most other teams in that universe are so highly analogous to the JLA that it almost seems redundant to read about them (the Teen Titans, the Justice Society, etc.); and though DC might "invest in" the lesser characters in a business sense, it's not really going to invest in them in the way that makes nerds care: letting the "little characters" do things that have ripple effects across that fictional cosmos that permanently change the lives of even the bigwigs like Superman and Batman.
•••
By contrast, it's genuinely hard to say what the "center" of the diverse Marvel Universe is, and each candidate character-set can in theory have a very different type of fan: Spider-Man, the Avengers, the X-Men, the Fantastic Four, the cosmic/space characters such as Warlock, lately the Hulk…  Marvel reaps the benefits of seeming convincingly polycentric (to put it in international relations terms).  And yet most of the characters live in New York
City (a real city, more or less, unlike all the fictional ones at DC), so if something changes the lives of one batch of characters and the others react to it as if it happened next door to them, you tend to believe it (even if teleportation to another planet was involved at some point).
Start combining these different sub-worlds of Marvel, and the reader almost immediately feels obliged to follow all the causal threads: If Latveria becomes the new primary refuge for mutants and later the Avengers have to invade to retrieve some cosmic object that Warlock dropped there, Marvel's already got you buying four different series and taking each one seriously.
Alas, back at DC, if Lex Luthor takes over Markovia with help from Dr. Sivana, you just wait and see whether it actually stops Clark Kent from coming in to work at the Daily Planet on schedule each morning or makes anyone think the Outsiders matter -- and it almost certainly doesn't do either.  (You can safely go back to buying Batman.)
•••
You made us believe a man can fly, DC.  Try instead making us believe something unexpected such as, say, that from here on out -- I mean maybe permanently -- the Omega Men are more important than the Justice League…or minor Hawkman stories are capable of changing Batman's status quo…or D.E.O. are likely to displace the Science Police (for more than one story arc)…or…  You get the idea.  People would have to start paying attention.  (Anything could happen!  Anything!)  Instead, we know where to look: Metropolis, Batcave, Paradise Island.  Still Clark, still Bruce, still Diana.  Done.
DC has consciously gone to great lengths in recent years to make sure its main characters' status quos are near-identical to the way everyone remembers them being a quarter-century ago.  Touching, yes, and accessible, yes, but not necessarily attention-holding -- not alarming -- certainly as regards all the lesser characters about whom no strenuous efforts are being made one way or the other.  Makes us think we could (and no doubt should) ignore the characters for another quarter-century and they'd probably be in the same place (Metropolis, Batcave, Paradise Island -- done).
By contrast: Have you heard that the X-Men took all the mutants to go live on a floating island, with Prof. X demoted to taking orders from Cyclops?  Did you see that the Human Torch died and the Fantastic Four transformed into a big organization with members ranging from Reed's dad to Dr. Doom?  What's that all about?  Better go read some Marvel Comics before things get even weirder while you're not watching, kids!  Don't worry -- Clark Kent's not going anywhere while you're gone, and the Outsiders still don't matter.
Posted by Todd Seavey at 6:12 AM