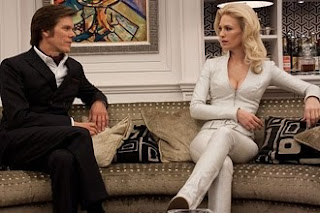 We will soon have seen January Jones play at least three morally problematic characters living in the 60s:
(1) a superficially respectable and conservatively-dressed sociopath (on Mad Men)
(2) a hippie-dippy manipulator and two-timer among rock aficionados (in Pirate Radio)
(3) the mind-reading and scantily-clad White Queen of a decadent, elite Hellfire Club keen to turn a bunch of mutants and outcasts into a new aristocracy (in two months, in X-Men: First Class, from the director of Kick-Ass).
In short: I'm starting to feel as though I dated a composite of Jones’s characters.  But, really, seriously, no more talk of that ever: let us focus instead on virtue during this blog’s “Month of Heroes.”
There are plenty of superhero movies out these days (about seven this summer alone, depending on how you do the counting, which is why I’m doing this anticipatory month of entries), but it’s still a bit surreal to see stills of Kevin Bacon and January Jones in hip early-60s garb playing X-Men villains (Sebastian Shaw and Emma Frost of the Hellfire Club).  Let’s devote today to their film.
(AND DEVOTE TONIGHT TO AUSTIN, TX’S OWN HELLFIRE CLUB, THE DIONYSIUM, WHERE I SPEAK AT 7PM – get your ticket before they sell out; I will teach the socialists to listen to states’-rights-loving fellow Texans and then for the coup de grace teach states’ rights conservatives that, in the words of Yaron Brook at an NYU debate last month, states don’t have rights after all, only individuals.)
•To give the deviants their due, dare I say it: I find myself thinking that it may be almost as interesting seeing how Magneto and the Hellfire Club differ philosophically in the new movie as seeing how Magneto and Xavier differ.  I mean, both Magneto and the Hellfire Club think mutants should rule.  So the crucial difference may be that Magneto wants to rule openly and proudly, while the Hellfire Club is content to game the existing social system in their favor, even leaving most of it in place or aiding strategically useful humans, so long as their mutant cabal stealthily reaps the rewards.
We have to admit, then, that Magneto is more moral.  He’s a misguided revolutionary, while the Hellfire Club members are simply corrupt, hypocritical parasites with a sadistic streak.  It’s fair, though, to ask who is more dangerous.  I predict that the film will somehow avoid depicting the Hellfire Club as subversives, despite their inherent outsider status as mutants, and will instead depict them as uber-conservatives, the decadent 60s Establishment made flesh, with the question simply being whether we should prefer Prof. X’s (i.e., MLK’s) or Magneto’s (i.e., Malcolm X’s) approach to fighting that Establishment.
•I wonder if we’ll be given a vague fictional “start date” for the mutant phenomenon.  As “Children of the Atom,” the first generation coming of age a couple decades after the Trinity atomic tests would make perfect sense – but then again, we know from the first X-Men movie
that Magneto was a child prisoner of the Nazis, so at least some mutants preceded the atom bomb, in the films as in the comics.  (Perhaps Magneto’s parents worked with Madame Curie back in the day.)

•Here's hoping they surprise us all in X-Men: First Class and finally deploy some giant anti-mutant Sentinel robots somewhere other than the holographic Danger Room.  I would also settle for taking a key 80s plot from the comics and nudging it a couple decades earlier (with revisions) – and watching Mystique assassinate JFK.  Indeed, if that inspired the creation of the Sentinels in the first place...and our present is the dark future that the early-60s X-Men failed to prevent...that would be the most awesome thing ever.  Maybe I need to start writing screenplays.
•Another free suggestion for Marvel: for crying out loud, why has no one yet bothered to suggest that Iron Man foe/lover Madame Masque, a.k.a. Whitney Frost, is the (adoptive) cousin of Cyclops foe/lover Emma Frost (both reportedly hailing from wealthy blue-blood families named Frost but eventually turning to crime)?  How about a Maggia-vs.-Hellfire Club crossover miniseries, eh?
•One trivia tidbit normal folk wouldn’t necessarily know about regarding the upcoming X-Men movie: It takes place in the early 60s, at about the time when the original X-Men comics appeared, but, ironically, the villains played by Jones and Bacon are among the few actual bona fide important X-Men characters to emerge in the 80s, even if only by one precious month.  (If the film series lasts long enough to depict the 70s, they should introduce actual X-Men team member Disco Dazzler.  Speaking of music from the 70s and 80s, I contend that in the live version of “Wrapped Around Your Finger,” Sting pronounces the word “hip-a-mo-tized,” by the way.  Very blues.)
•Jones n’ Bacon is a name combo that makes me hungry.
•And finally: if they do not make some sort of joke in the movie about Bacon’s character being a conspiratorial leader only a few degrees removed from some of the world’s greatest powerbrokers, I will be disappointed.
Posted by Todd Seavey at 8:33 AM