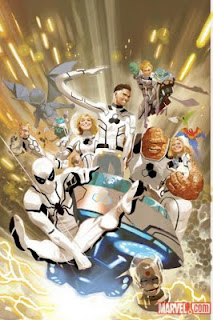 Maybe I'm just a sucker, but despite comics always cycling back to the original status quo, I’m impressed by Marvel Comics celebrating the fiftieth anniversary of the Fantastic Four by killing the Human Torch and canceling the series, then relaunching it as simply FF (for “Future Foundation”) with new members including Spider-Man, new uniforms, a much bigger extended-family-feeling cast of characters, and this snazzy cover to issue #1, which screams “optimism!” in a way that a book about the future should – and that hasn’t been dominant in comics (or culture generally), what with all the dystopias and so forth, for some time.
I think the kids and the parrots (unusually upbeat for modern superhero comics) are a crucial touch.  It really does almost make me feel as if change and hope are possible, and not for political reasons.  (Oddly enough, one of the numerous alternate covers that Marvel released for the issue is one of the worst I have ever seen on any comic book, so thank goodness modernity comes with options.)
Of course, despite all the changes, Doctor Doom will probably be trapping the heroes in the Negative Zone or whatever in the usual fashion within three months, and I’m sure the Human Torch will spring back to life sooner or later, but perhaps the new, expansive tone that writer Jonathan Hickman appears to be aiming for will last.  That would be a fitting next step in the FF’s half-century evolution.
(In the real world as in the comics, technology can be a double-edged sword, as a naked man using an AK-47 to attack a SWAT robot learned last week.)
Like many people, including some who work for DC Comics, I preferred Marvel when I was young, in large part because Marvel did a better job of making it seem as though change was possible.  No one ever believed that Superman would die and stay dead, but a second-tier X-Men member might.  Change at DC, alas, tends to be seismic – and temporary – rather than convincing, gradual, and organic.  This summer, for instance, they’re transforming the universe via time shenanigans again (not only am I not collecting the stuff anymore, I plan not to learn second-hand what happens on this one – on a personal level, that’s progress).
And I’m probably not the only person who thinks, with a delight that underscores broader problems, that the most intriguing part of the advertised (temporary!) changes to the DC Universe is not that Wonder Woman will be a warrior queen or that Batman becomes a casino-owning degenerate but that there will suddenly be a bouncing insectoid hero – with his own book – called the Canterbury Cricket, who seems to have no precedent in the DC Universe we already know (you can scroll down to, and enlarge, the cover of his comic among the ones shown here).  Change is possible, but sometimes it happens in small, strange packages, in England.
Posted by Todd Seavey at 11:09 AM

No one ever believed that Superman would die and stay dead, but a second-tier X-Men member might. Change at DC, alas, tends to be seismic – and temporary – rather than convincing, gradual, and organic.

But of course a first tier X-Man will always come back, time and time again. I think the root cause of much silly plotting in comics books is their readers' obsession with continuity. I propose that every writer be given permission to create his own universe and timeline, or as many as he likes, with no expectation of consistency among them. That way no one will feel compelled to come up with ridiculous retconning to explain how Jean Grey, Barry Allen, etc. were dead but now aren't. If Grant Morrison want to write a Superman story in a universe where Supergirl is alive, I say go ahead. If John Byrne then wants her to be dead, I say that's also fine.

DC's seismic crises that somehow provide an in-continuity explanation for discontinuity, along with their hyper-organized multiverse, are entirely unnecessary. If fans can understand that Tim Burton's Batman is not the same as Chris Nolan's Batman, and neither are the same as Bruce Timm's Batman, they can handle many more Batmen. Just let go, comic book editors, let go.

The world knows I am a very forgiving man, sir -- and I count among those on civil terms with me not only communists and religious people but even all (save one) of my ex-girlfriends. But this, clearly, is a declaration of war.

No, actually, seriously, I sympathize -- and I was not aghast when DC Comics briefly deployed the idea of "Hypertime" to explain fluid, ongoing revisions of history (heck, I'm even still friends with one of the guys who came up with Hypertime!). I do not ask -- indeed, few fans ask -- that Nolan's Batman be like Burton's Batman.

Likewise, if DC _keeps telling us_ that all their (regular, monthly, ongoing, non-Elseworlds, non-Vertigo, time-travel-free, etc.) comics take place in a shared fictional universe, I don't think it's asking too much for them to deploy an intern or something -- or, heck, one of the countless fans who'd likely do it free of charge -- to keep track of at least the big, gratuitous, unnecessary contradictions.

This is not just obsessive systematizing, either. The fact is, this stuff is -- I'll come right out and say it -- not great literature and arguably therefore derives _most of its power_ from the cumulative weight of (fictional) history. That doesn't mean that a great Superman story is rendered useless by one inconsistent sentence, but they could often make more of an effort than they do OR simply admit that the story is in some alternate version of history.

Fans -- including continuity-watchers like me -- have proven their willingness to embrace alternate-history stories from Miller's Dark Knight to Morrison's All-Star Superman, but don't feed me randomness and tell me it's order (or blame for the fact that DC keeps claiming it's order), if you follow me.

I wasn't bothered by Star Trek starting a new timeline, either -- but I will be if, say, the second Abrams film claims that Spock, seen romantically involved with Uhura in the first film, was _not_ involved with Uhura circa that earlier adventure, especially if that creates jarring confusion in a couple scenes for those who've been paying attention.

But, yes, just as I hate to see qualified teachers forced to undergo government certification, I really do not want artists stymied by petty nitpicking. Just admit when it fits together or doesn't, head honchos, please. (Otherwise, ironically, we who barely ever read the stuff now are rewarded at the expense of loyalists, which seems unjust -- like pretending Clark never dated Lois because some new, hotter, more popular actress suddenly gets hired on _Smallville_ or something. Without history, we have no [fictional] cultural inheritance and all is chaos and the whims of pamphleteers.)