Captain America’s Foe (plus the economic collapse of America) 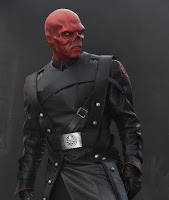 A few thoughts inspired by the Nazi villain the Red Skull (played by Hugo Weaving of Lord of the Rings and Matrix fame) from this summer’s Captain America movie:
•That skull-and-octopus symbol on his belt buckle (which looks a bit like a sinister Kochtopus t-shirt that some leftists have been selling) is not a Nazi symbol but rather the emblem of the evil organization Hydra from various Marvel comics.  The Hydra symbol not only hints at the later use of those characters but enables the inevitable Red Skull action figure to be advertised in Germany, I’d imagine, since you can’t display the swastika there.
•Another strange-looking one-time leader of Hydra, by the way, was an action figure before he became a comic book character, namely Baron Karza of the Micronauts (who was also created prior to Darth Vader, hard as that may be to believe).  There was something wonderful about comics images of an autocrat only inches tall giving orders to the assembled soldiers of Hydra.  The relationship did not last, though.
•What the Cap movie really needs is a cameo by the WWII Human Torch.  Eh?  Eh?  Think about it.  Same actor!  Could be some sort of frisson there, right?  It’d probably be a messy legal issue with Fox, though, since Fox has the Fantastic Four film rights.  (More on Marvel’s divided film-contracts empire later in the month.)
•Red Skull looks a bit like Skeletor.  Here’s a nice distillation of just the Skeletor moments from the Masters of the Universe movie so that you don’t have to watch the whole thing.  The movie was apparently a conscious imitation not just of the animated He-Man series but also of the New Gods comics by Jack Kirby – with travel to Earth by de facto Boom Tubes, even!  I am almost tempted to watch it again, since I didn’t pick up on the New Gods parallels the first time around.  But it would still be lame.
P.S. And for subtler and more realistic villains (really – who else has captured intellectual evasion and crony capitalism as accurately?), watch Atlas Shrugged with me by buying your ticket online now for the Saturday, April 16, 4pm show at AMC Empire 25 (42nd and 8th) and meeting me in the lobby at 3:30.  Then discuss that – or anything else – at the Monday, April 18, 7pm Manhattans Project bar gathering at Langan’s.  (Already planning to attend Saturday is a man whose childhood ambition was to be Skeletor, by the way, but luckily Rand taught him morals.)
Posted by Todd Seavey at 10:01 AM