1. Sticking resolutely to the plan to be online only when there are projects of some sort to announce, I note that Brown Alumni magazine published my letter(!!) about a UK-raised professor, like so:

No, despite the attempt to depict him as an unusual character, it's not at all a surprise that political science professor Mark Blyth has the “confidence,” “potty mouth,” barely-concealed “anger,” and blank-faced “rat-a-tat delivery” that Beth Schwartzapfel describes, nor that he was once such a cool dude he played bass in a rock band.

He's a classic left-wing hothead who doesn't know economics nearly as well as he knows what sort of political diatribes sell. I give Schwartzapfel credit for at least bringing in the voices of those unfairly criticized by Blyth long enough for them to note that "austerity" is an amorphous term Blyth uses to condemn whatever policies he doesn't like (namely, property rights and free markets).

One could go further and note that nothing resembling “austerity” in the sense of reduced government spending has occurred in either the U.S. or Europe, despite feeble belt-tightening rhetoric, so if things are going badly (and they are), it can hardly be due to some imaginary upsurge in laissez-faire...

The letter as printed goes downhill after that because despite my warning they didn’t correct the typo in the next sentence.  I typed “regulation” where I meant to type “deregulation,” and as a result the truth shall never be known.

2. Still: even students at the mercy of a Prof. Blyth are better off than viewers getting their econ from The Daily Show, which literally featured a reporter doing a spit-take at the absurdity of the law of supply and demand in a segment mocking libertarian Peter Schiff’s opposition to minimum wage laws. 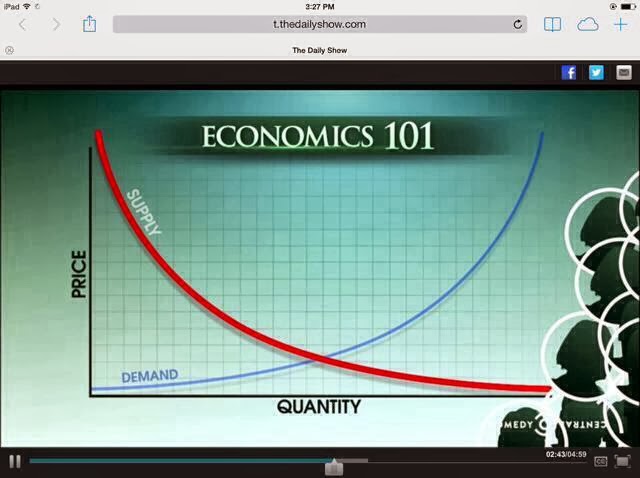 Fittingly, The Daily Show featured the nearby graphic (h/t Phil Saxton) of supply and demand curves with “supply” and “demand” mislabeled, likely because they genuinely have no idea what any of this means (as it happens, I told one future Daily Show writer, Daniel Radosh, way back in the 90s, that if minimum wage laws don’t increase the odds of low-wage workers being unemployed, there should be banner headlines saying “Basic Laws of Economics Repealed: Logic Does Not Apply to Universe” -- so maybe all these years later he took me at my word). The graphic was later corrected in the online version of the segment.

In other Daily Show news, occasional correspondent Olivia Munn reportedly has a psychological condition that impels her to obsessively tear out her eyelashes from time to time.  A crasser man might ask men to consider whether they would still date her.

He’s bound to be wiser than recurring guest Jesse Myers, an avowed communist.

4. Kennedy and Welch’s Reason colleague Shikha Dalmia, by contrast, will be hosting a panel discussion (6:30 Tuesday at the Asia Society on Park and 70th)  on elections in India.

5. But it may be in Costa Rica that a (sleepy) libertarian shows us the proper attitude toward politics.

6. While over at the Vatican, libertarians have become an important voice criticizing the socialistic current Pope.

7. And in South Africa, strange rap band Die Antwoord reveals that it takes inspiration from Ayn Rand (h/t Jesse Forgione, himself relocated to the distant nation of Florida).  This puts a whole new spin on their disturbing video “Rich Bitch.”

(Speaking of lands riven by past ethnic strife, there are countless reasons neo-Nazi types are stupid, including the fact that there was never a more mongrel race than the Germans of centuries ago, to whom “tribe” meant only willingness to fight under one general’s banner, but another of interest is the apparent preference of German men for darker-skinned mates, in contrast to the preference of many peoples for fairer women.  Opposites attract regardless of what racial purists might want, it seems, and I for one say, vive der difference.)

8. I’m not sure they’re as scary as Die Antwoord, but you could join me Wednesday night at 9pm at Otto’s Shrunken Head to see performances by, among others, Tibbie X (with her new band Gash) and the funny Jessica Delfino (whose song “My Pussy Is Magic,” ironically, was just recently pointed out to me by Justin Shubow, whose aesthetic tastes may be classier and more refined than just about anyone I know).

There’s a thin line between avant-garde and trashy (as between clever and stupid), and while I think of it, there’s a thin stylistic line at times between Arcade Fire and Cyndi Lauper, as both acts are aware but fans may not be.

9. Despite a few alternative rock fan Reason contributors being mentioned above, that publication has harsh words for the snooty anti-materialism of Macklemore and Lorde.  As a humble, thoroughly middle-class guy, I’ve known since rubbing elbows with rich left-wing assholes at Brown that there is a thin line between Progressivism and self-congratulatory fantasies of “noblesse oblige.”  Scratch that: there's no line at all, really.

10. I shouldn’t play the populist, though.  I didn’t even watch the Super Bowl.  And despite doing a “Month of Time Travel” on this blog in January, the only aspect of popular rituals like Groundhog Day that I care about is inadvertent political messages like the one sent by a fumbling Mayor de Blasio when he dropped NYC’s designated groundhog.  Maybe the public was onto something when it freaked out over his inappropriate pizza-eating style recently.

Of course, I’m more concerned when the bastard does things like launch a war against charter schools to keep teachers unions happy (even as Progressives pretend to be the ones helping children learn).  The Progressives are also shutting down NYC gifted-student programs since too many of the kids qualifying for them are white.  There’s social justice for you, I guess.
Posted by Todd Seavey at 1:00 PM

If Die Antwoorde was a metal band, would that mean they were playing "Rearden metal"?