10 Pop/Politics Notes -- as Prep for THE OSCARS and for...LIBERTY ISLAND! 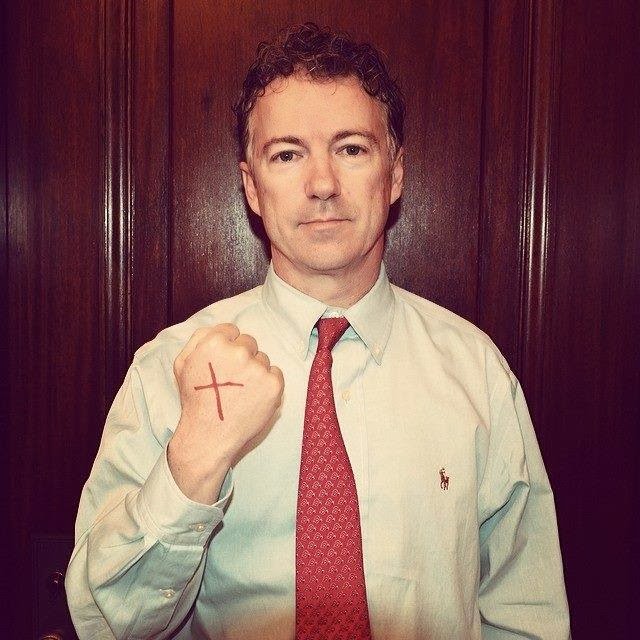 Yes, that’s a photo of Rand Paul with a “straightedge” punk symbol on his hand (for punk fans who don’t do drugs or otherwise abuse themselves or others).  My prophecy of “Conservatism for Punks” is coming true after all (have I mentioned that my friend Tibbie X is in the band Reagan Youth now and that unlike some current and former Lower East Side acquaintances of mine, much as I love them all, she likes gentrification?).  OK, actually it’s the symbol for the Feb. 27 day of awareness for the anti-slavery “End It” movement opposing residual pockets of slavery in the world, but, hey, it’s all part of a broader struggle for freedom.

Punk/libertarian synergy makes perfect sense, since punk and libertarianism alike are freedom-loving and anti-fascist (it’s certainly more badass than this montage of liberals crying).  And let it not be forgotten that fascism was a form of socialism -- though it’s true that connection can be oversimplified.  The impulse to force people into a herd is the root of almost all evil, including government.

No politician’s perfect, of course -- because they’re politicians, the lowest human form (no gods, no masters!) -- but it’s fair to say I like Paul more than juvenile, sneering, condescending, vicious-sorority-girl-sounding columnist Jennifer Rubin does.  In her recent anti-Paul column, rooted in her utter shock at the idea that anyone would want to avoid a new Crimean War with Russia, she quotes an anonymous Hill staffer saying (equally condescendingly) that the last time the U.S. tried complete isolationism it didn’t work out so well for us.  When the hell was that?  The 1880s??  (And didn’t that period actually work very well?)

But let’s get back to pop culture, where there are big developments this week as the Oscars approach.  Here are ten of them:

1. The biggest, plainly, is the launch (despite some kinks still being worked out) of the libertarian pop culture site LibertyIslandMag, for which I’m recruiting cartoonists and writing gems like this short story about time-traveling punks, “No Future.”

2. Trivia note: the one big scene cut from the story in the editing process involved Jodie Foster giving an Oscars acceptance speech, but regardless, time travel stories are always timely.

3. The back-and-forth lately about whether Woody Allen has committed crimes has been both painful and interesting, but even those inclined to distrust him can’t dismiss his productivity.  He’s directed a film per year since the year I was born -- well, he skipped ’76, but he made up for it with the epochal Annie Hall the next year and later had a couple two-film years.  He should do something special when his 50th film arrives soon -- if he’s not distracted by rumored marital woes with Soon-Yi.

4. In a reminder that the world would still be filled with vicious political in-fighting even if only the libertarians remained in it, there was controversy over Students for Liberty having (Hugo Chavez-idolizing) Oliver Stone speak at their recent conference.  My libertarian colleague Andrew Kirell thought the outrage was ridiculous and pointed as an example to Sonny Bunch’s column condemning the Stone appearance -- a column which in turn approvingly cited me, since I recently argued libertarians could productively think a bit more like neocons without losing their souls.  And so enemy and ally are linked like Ouroboros.

(Another odd tension within libertarianism over foreign policy matters right now is that while libertarians seem pretty clearly to side with anti-government protesters in Venezuela, a few -- with whom Jennifer Rubin would be very, very angry indeed -- have become not just anti-interventionist regarding Ukraine but defenders of the ousted, Russia-allied Yanukovich regime, in part because they hate the NGOs and Soros-backed organizations allied with the pro-EU faction in Ukraine even more than they hate the Russian government and, presumably, ex-KGB heads of state.  Adding to the confusion, I’ve noticed a few leftists mistakenly getting the impression that Putin’s new U.S. fans are neoconservatives -- like Jennifer Rubin! -- rather than some paleoconservatives and paleolibertarians.  Well, perhaps a world war will clarify things, whether it starts in Crimea or Syria.)

5. As is well known, I’d prefer libertarians stay focused on economic issues, but AlterNet’s Lynn Parramore has the economy all figured, apparently: It’s all about boobies.

6. In other gender news (h/t Chris Stamper, not to be confused with Doug Stamper), behold the hipster-goth-freakazoid who is NYC’s most desired straight woman according to the weirdoes using dating site OKCupid.  I am not nearly weird enough for this town and must try harder.

7. To compensate for sounding like a square gender-wise there, here’s a link to a clip that includes a couple of my favorite Ellen Degeneres jokes, which were right there in the first half of her first network appearance, twenty-eight years ago on The Tonight Show (you can skip the second half of the clip, though her chat with Johnny Carson -- not to be confused with her imaginary chat with God moments earlier -- does contain one marvelously succinct feminist moment).

8. Speaking of foreign policy threats, this week saw the final issue of the Star Trek: Khan comic book miniseries, revealing that in the J.J. Abrams timeline, as intended by the writers from the original 1960s Star Trek series, Khan (apparently) conquered a third of the Earth back in the 1990s, nuking a couple major cities in the process.  I like them depicting Khan this way again.  The Abrams universe doesn’t exactly match the traditional Star Trek timeline -- why should it match the real world’s?

9. Actor Roger Hill, who played another charismatic conqueror, namely multi-gang-leader Cyrus from the movie The Warriors, passed away this month (h/t Janet Harvey).  Maybe we should all honor Cyrus’s passing by seeing another Peloponnesian War-inspired film, 300: Rise of an Empire, next week.  Widowed queen turned Xerxes-allied warrior Artemisia really fought -- very well -- in the battle of Salamis, you know, so the film isn’t solely based on comic books.

I also think they should have Miley Cyrus do a cameo as a member of Cyrus’s family (“Now dance your unique dance for me, Cyrus, and sing of the glory of the Persian Empire!”), but you can’t have everything.

10. And if we survive the next couple months, there’s Godzilla, Spider-Man, X-Men, and Seth MacFarlane’s comedy Western all awaiting us for a wonderful May -- including the final issue of the comics miniseries The Star Wars and the start of shooting on Episode VII, which will be released next year.

But when I’m not enjoying those things, assume I’m gradually tinkering with this site’s permanent elements to make them look a bit more presentable (or possibly doing things over at LibertyIsland) -- though I will at least pop back in here for one more (especially surreal) movie note in a couple weeks.
Posted by Todd Seavey at 1:26 PM