BOOK NOTE: “Rise of the Warrior Cop” by Radley Balko (plus: Alexander Cockburn and more) 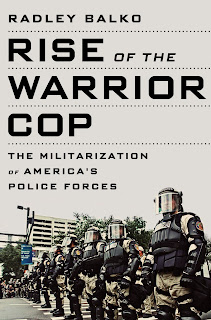 It’d be nuts to think every terrorist incident was an “inside job” -- but killers from Oswald, McVeigh, and Chris Dorner to Navy Yard shooter Aaron Alexis have often had military and/or police ties, which is hardly surprising.  Violent personalities will probably tend to be drawn to jobs that allow them to use force against people (and when they go berserk, politicians -- even while arming groups with terror ties -- will respond with calls for increasing the power of police or the military and disarming the rest of the population, renewing calls for bans on specific disfavored weapons even when they were only falsely reported to have been used in the rampages).

I didn’t worry too much about police and military abuse of power when I was a child watching the TV show S.W.A.T. (with its classic, undeniably funky theme song, from an opening sequence that was surely a big influence on the Beastie Boys’ epic “Sabotage” video over a decade later), nor for that matter while absorbing the less violent but still quasi-martial virtues in some of my other early favorites, like Star Trek or reruns of Thunderbirds (which, nearly fifty years after its debut, still has the best opening sequence in TV history).  I certainly did not realize when I was a child what novelties S.W.A.T. teams were.

The police were not always so militarized, as is explained in a book I actually chose to buy in a store despite going to a lot of Reason events lately: Rise of the Warrior Cop: The Militarization of America’s Police Forces by Reason’s Radley Balko (who I hear was Breaking Bad’s Walter White for Halloween, though paradoxically he also looks a bit like DEA agent Hank).  Less than two centuries ago, we didn’t even have continually-staffed, official government police departments, as hard as that must be for non-anarchists to imagine.  It is roughly during my lifetime, especially under the influence of ardent drug-warriors Nixon and Reagan, that no-knock raids and paramilitary tactics came to be seen as necessary -- and a way to generate cool publicity for law enforcement and the politicians backing them.

At least in the 70s and 80s, militarized police were still seen (despite increasingly-frequent, sometimes tragically botched raids) as something to be deployed on special occasions.  In the Bush/Obama era, even as drug-war fervor ever so slightly diminishes, the vague, omnipresent threat of terrorism is seen as sufficient reason for every dinky rural police department in America to be outfitted with body armor, tanks, stun grenades, and other Department of Homeland Security-subsidized toys that now get used even for checking on routine regulatory violations.

If there’s a terrorist on the loose, the whole town might just be put under martial law, as in Watertown, MA -- though the hippies of 1980s rural California could’ve told you that the mere possibility of pot-growing was by then seen as enough to justify helicopter raids and the temporary penning-in of the entire local populace.

In the wake of the George Zimmerman verdict, Attorney General Eric Holder said we must reject “stand your ground” laws that permit arguments of self-defense without obligation to retreat to be made by defendants (disproportionately black ones, actually, despite the impression you’d get from the hubbub surrounding that case -- an ambiguous one in which an all-female jury reluctantly acquitted a Hispanic neighborhood watch member who’d been in a losing fight with a black teen, leading somehow to new denunciations of a white-male-dominated justice system).  You’d think from comments like Holder’s -- and the rhetoric of anti-gun activists -- that vigilantes or believers in the basic right to self-defense are the biggest danger in America and that we’d be in safe hands if the police and military were the only ones who were armed.  That’s even harder to believe after reading about some of the cases in Balko’s book.

(It’s also the “minarchist” libertarian or “law and order” conservative version of the mistake the left routinely makes: assuming that if government sticks to the functions you consider legitimate or important, it will at least do those things well.  No, it will do everything badly.  With government, every mission is creepy.)

Balko recounts cases (1) where one stumble by a cop
led others to think they were being shot at and open fire with fatal results for one hippie, (2) where a war against the Black Panthers led to one being shot by cops at point-blank range as he slept, where (3) valuable property was seized by cops not even because its owner was convicted of acquiring the property through drug dealing but simply because the property was roughly estimated to be equivalent in value to property the owner was suspected of acquiring by drug-dealing, and many, many more.

If our civil liberties and legal procedures dissolved that quickly under the mere threat of drugs, one can only imagine what sort of horrors and flimsy pretexts lie ahead in an era when potential terrorists and workplace shooters are imagined to be so omnipresent that we should all be prepared for phonetaps and lockdowns at all times.  With his brave reporting on this topic, Balko has become like a one-man “thin line” between us and police overreach.

•The vast and growing array of YouTube videos of cops behaving badly makes it increasingly difficult to take the Giuliani-like view that cop misbehavior is rare and not indicative of a broader culture of gung-ho recklessness and ass-covering (though I think I have at least one acquaintance at the Manhattan Institute who doesn’t want to hear about it).

•Fellow anarchist Gary Chartier (mentioned briefly in United States of Paranoia as having a dad who was intrigued by conspiracy theories) linked to this piece by Reason’s Brian Doherty about paranoid cops in New Hampshire seeing local libertarians as justification for a Homeland Security-funded armored vehicle.

•And even the most reasonable-seeming police activities sometimes turn out not to make so much sense under closer examination, as this detailed video argument against low speed limits suggests (h/t R. Brent Mattis).

•The left, to its credit, has long been wary of everyday police and military abuses -- and on rare occasions spawned writers who were nonetheless still fond of guns, like Hunter S. Thompson and the man Verso books honors at powerHouse in DUMBO this Thursday night the 19th, the late Alexander Cockburn.  I plan to attend.

•And if all this sounds scary, take some comfort in knowing this Saturday the 21st is the International Day of Peace.
Posted by Todd Seavey at 2:40 PM