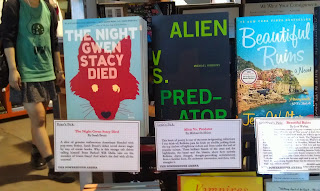 I.  Fellow libertarian Justin Raimondo did not show up as advertised to be one of the speakers at last night’s swell event at powerHouse on the occasion of the release of leftist writer Alexander Cockburn’s posthumous memoir A Colossal Wreck.  Had I foreseen that, I might not have worn my “An-Cat” black-and-gold anarcho-capitalist button (gots ta represent), but I’m not complaining.  I honestly went because of (fellow NYPress veteran) Cockburn -- and applauded briefly at mention of his heterodox fondness for climate-change skeptics and militias.

We could use more rogues like him, Hitchens, and Hunter S. Thompson, frankly. 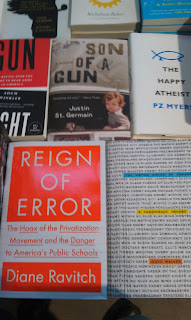 Cockburn’s family members and colleagues did a fine job, and I was not too weirded out by the fact that powerHouse is so eco-friendly it has neither paper towels nor air dryers in the bathroom, just two communal cloth towels.  I haven’t seen that in a public place since my trip to India in 1999 (which was simultaneous with the antiglobalization idiots rioting back in Seattle, as it happens).  And now the City is starting mandatory “organic recycling” programs for all food and yard waste, I’m told.

Odder than the towels, though, were the novel and book of poetry on the shelves at powerHouse (seen in the nearby photo) titled, respectively, The Night Gwen Stacy Died and Alien vs. Predator.  When even I am worried hipster culture and serious literature have gotten too nerdy, times are strange.

Yet I cannot claim I am not bound to these things -- nor can I pretend to feel no connection to three other books I saw lying on a powerHouse table (also seen in a nearby photo): an atheist book by PZ Myers, who recently attracted some attention by relaying anonymous accusations that another prominent atheist is a sexual assailant; an anti-school-choice book (opposition to school choice being the most sadistic political cause in the contemporary Western world, I’d argue) by Diane Ravitch, the one-time FreedomWatch guest and grouchy turncoat who went from advising conservative administrations to shilling for the diabolical teachers unions; and United States of Paranoia by Reason’s Jesse Walker, which I blogged about mere days ago. 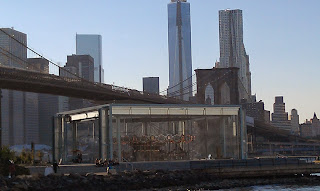 And the same day I was enjoying a nostalgic reminder of NYPress in DUMBO, it turns out the Press’s old arch-rival -- and Cockburn’s prior New York venue -- the Village Voice, was finally vacating the Village in economic defeat (h/t Kevin Walsh).  Not that there’s much left of the Press these days, of course -- though there was an old and graffiti-covered green Press distribution box not far from powerHouse last night.  (There is also now a spectacular view of the juxtaposed carousel, Brooklyn Bridge, Gehry skyscraper, and Freedom Tower all visible from a spot near powerHouse in DUMBO, as you can see from another nearby photo I took.)

II.  A less-radical staple of 80s/90s culture was the constant warning that drugs are dangerous, including things like this ominous PSA featuring Pee-wee Herman.  Ads for drug-avoidance should perhaps instead star (numerous) dead 90s rock stars (speaking of which, this month marks TWENTY YEARS since Nirvana’s In Utero, and maybe it’s just because I’m ancient, but this video looks to me like it could’ve come out yesterday, aside from the fact that occult imagery is for hiphop bands these days).

For a more detailed and balanced depiction of drug use, though, you should turn to Dr. Carl Hart, who spoke to a recent Reason event at the Museum of Sex and was profiled in the New York Times by John Tierney (Tierney, writer of the classic article “Recycling Is Junk,” might also have some skeptical thoughts on the organic-recycling mandate).

Hart is a Columbia neuroscience professor who
has shown that many of the claims about the power of illegal drugs to turn people into de facto zombies are simply not backed up by the experimental evidence.  He has administered many doses of illegal drugs -- with special permission from the government -- to volunteers at his Columbia lab, and it turns out even the most-feared illicit substances tend to have effects comparable to coffee or alcohol.  The drugs are, in short, being scapegoated (by users and government scolds alike) for deeper sociological/psychological problems.

Hart is no stranger to those deeper problems, having grown up in a fragmented and sometimes violent black family in Florida before escaping the fate of many of his friends and relatives through academia.  His journey is recounted with frankness that many white folks, so to speak, will find startling in High Price: A Neuroscientist’s Journey of Self-Discovery That Challenges Everything You Know About Drugs and Society.

The Reason crowd heard Hart speak a mere three days after the Trayvon Martin shooting, as it happens (a case in which the defense itself never invoked “stand your ground” laws, by the way, and I didn’t mean to imply that in my blog entry Tuesday).  It might have been interesting to hear more about Hart’s fairly conventionally-leftist view that Reagan and others were engaged in a conscious war on black people rather than just pursuing a misguided war on drugs (since many of us Reasonoids retain a certain fondness for Reagan).

But Hart explains that his skepticism about the government’s fearmongering when he was young in the 70s and 80s (on matters ranging from climate change to black gangs) helped nudge him to become a skeptical scientist, seeing how even the scientific establishment can become enamored of certain easy narratives, especially when there are grants attached and it’s easier to do brainscans than sociology.  While he doesn’t blame crack for the ills of poor blacks or want Reagan-style crackdowns on crime, Hart also sees with a neurologist’s clinical detachment how the environment he grew up in really did encourage shorter-term thinking, less-verbal communication, and more violence.  Drugs, in short, look like a much more appealing escape when you are in an already-unpleasant social context.  The drugs didn’t create that context.

As in so many areas of culture, our desire for One Simple Explanation can prevent seeing the ways in which they’re all partly true.  So while some conservatives might rail against crack and black genes, liberals are not necessarily helping to clarify things by saying instead, yes, it is the crack’s fault and furthermore there’s nothing deeply dysfunctional about black subcultures -- and them saying that in turn encourages the conservatives, who might want to go back to blaming the crack and the black genes with new fervor.

Add to this the fact that, as Hart notes, imprisoning people may make them more likely, not less likely, to commit crimes in the future (indeed, he says it appears teens who committed crimes and got away with it are less likely to become adult criminals than ones who got caught and ended up in the juvenile justice system -- though to analyze that pattern fully, we’d have to have a frank conversation about whether stupid criminals are more likely to be caught than smart ones and how that affects the likelihood of becoming a career criminal).

Man, what a mess.

But the nice thing about science -- and about economic ideas like property rights, I might add -- is that it can provide a relatively clear path around some of those hopelessly complex social problems by showing us how one important premise we’ve been working with is false.  Knowing that your cousin who was a criminal deadbeat who constantly mooched money and had no lifegoals probably can’t blame it on the surprisingly mild biological effects of cocaine or what have you opens up new possibilities for giving him better advice -- or just avoiding him -- in a way that neither requires we become more blinkered in a conservative way (by writing him off as a drug-zombie) nor in a liberal way (by pitying him for being a responsible fellow who just had the misfortune to get turned into a drug-zombie).

People remain people, responding to incentives, making choices, weighing their entertainment options, mulling the likelihood tomorrow’s job interview will be more fun than another bong hit, no matter how much some might like to write them off as a separate species (or race, if you will).

III.  Yet the drug-war method of dealing with it all continues, and a documentary by Reason’s Paul Feine, America’s Longest War, will screen in NYC on Tuesday, Sept. 24 at 6:30 (get your tickets here).  I’m going.

And I wish Feine luck with the premiere even though he’s up against the 8pm premiere of the Marvel Comics-based TV show Agents of S.H.I.E.L.D. that same night. My attendance at Feine’s event and my complete avoidance of the S.H.I.E.L.D. show thereafter will be the slightly-transmuted version of my vowed anti-Whedon ban (aimed at punishing Whedon’s condescending anti-market video unveiled during the 2012 election campaign), if you’ll allow me to transform that plan a bit (the show seems to have Whedon’s fingerprints on it more than the movies do, though he reportedly rewrote some scenes last-minute on this fall’s Thor movie -- being the smart guy literally means being airlifted to the set to rescue other Marvel employees, apparently).

But anyone skeptical of the drug war knows that the most important TV event happens five days later, when Breaking Bad ends.  Already, the creator of Game of Thrones has blogged that he still needs to add a character as dangerous as Walter White to the cast of characters in Westeros.  Given how badly the Westerosians behave, that’s saying something.  And between these shows and House of Cards, America really loves sociopaths these days.

To compensate, here are some kittens.
Posted by Todd Seavey at 4:54 PM