An Immigrant (Debate) in Williamsburg 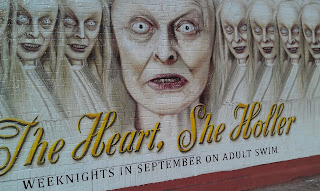 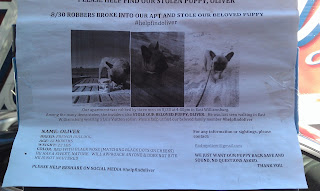 Tonight at 8pm I moderate the no doubt spectacular debate on immigration at Muchmore’s, near the first subway stop into Williamsburg on the L subway line.

To some shiftless Manhattanites, just making the brief subway hop to Williamsburg is apparently as traumatic as emigrating to a new country, which is sad.  On the other hand, much as they will be missed at this (and possibly other) events there, there are things about Williamsburg that can be culturally jarring:

•Manhattanites often comment on how old and unhip they feel as soon as they glimpse the Williamsburgers, but there are times when it can make the visiting Gen Xer feel a reassuring sense of superiority, as when I recently overheard confused young hipster males in a bar there having a conversation about whether (formerly NYC-dwelling) singer Joe Jackson is the father of Michael Jackson.

•Nearby you see the wall-sized outdoor painted mural advertising the David Lynch-esque, late-night, surrealist comedy/horror series The Heart, She Hollers that I saw in Williamsburg, which gives you some idea how different the (apparently crucial) young-hipster demo is there from the average billboard-gawker out in the suburbs.

(I include a photo of a flyer for a lost French bulldog named Oliver, taken by burglars in Williamsburg, as a humanitarian bonus.)

•I have found some Manhattanites paranoid that they will be trapped on the other side of the river if they dare trek to Williamsburg (this has happened about twice in the past 7,000 years), but I will admit I ran into one very unexpected transportation problem the last time I was there: For the first time, a Metro Card machine just plain ate my $20 and gave me no card.

The subway station agent, a Bernhard Goetz-looking guy probably very familiar to people using the Bedford Ave. stop, gave me forms to fill out and mail into the MTA to get my money back -- and then, when I asked to buy another Metro Card (in no way asking for freebies from him in the process, mind you), he proceeded to do the most protracted examination of my $20 bill for signs of counterfeiting I have ever witnessed, almost as if I were it were not the MTA that had just been revealed as a money-snatcher.  (Why would a counterfeiter draw attention to his travails with the card machine?)

•On a brighter note, that same trip to Williamsburg (to print out flyers advertising tonight’s debate) gave me a chance to further distance myself from the old comics-collecting habit a bit by giving three comics away to young folk hanging out at Muchmore’s (admittedly, I had already read them).  I hope their relative inexperience doesn’t mean that the special 3D cover on the issue about Darkseid will cause nausea.

(I think many of us are more sickened these days by DC Comics driving away many of its star writers through editorial micromanagement and by last-minute shifts in editorial direction that cause even the noble workhorse writers who can roll with the punches to end up doing jarringly disjointed stories.  Take Geoff Johns transitioning from a two-year build-up about pagan-god/wizard warfare in the “Trinity War” story arc into just having some familiar supervillains from Earth 3 teleport into town to take over the Earth in “Forever Evil.”  Two years of occult in-fighting and mystical remaking of time and space over the mythical Pandora’s Box, and it turns out it was just a teleportation device, no biggie.  On to the next mess.)

Even for those wearied by or long wary of DC and Marvel superhero stuff, with whom I fully sympathize, there is the amazing comic book miniseries The Star Wars from Dark Horse (who so richly deserve to keep the Star Wars comics franchise after all these years despite synergistic Disney now owning both LucasFilm and Marvel).  The Star Wars is a trippy comic book adaptation of George Lucas’s original 1974 draft of the Star Wars screenplay, with all sorts of familiar elements (including some that he wouldn’t get around to using on-screen until the prequels) but all scrambled around and put in different places.

There’s an aged Gen. Skywalker, and Anakin is a separate character from Vader, and Alderaan is the capital of the Empire, and all sorts of other surprises that make it a weird but essential mirror-mirror experience for completist Star Wars fans.  That one I kept even after dispensing the other comics to the hip young masses at Muchmore’s.

I admit I will delve back into DC Comics again when they publish either of the two projects Grant Morrison is now working on for them: the graphic novel Wonder Woman: The Trial of Diana Prince (which promises a return to the character’s bondage-influenced roots, for good or ill) and the ultimate metafictional/multiversal miniseries, Multiversity.  But oddly enough, despite those big projects, Morrison told the UK’s Guardian the following recently about the next miniseries in his occasional surreal/comedic side project, Seaguy, about a scuba-suit-wearing man living in a future world devoid of crime but menaced by Satan, a gondola-piloting Grim Reaper, and sentient fast-food paste: “It’s honestly the best I’ve ever written...It never sold well, but it’s my thing.  I want Seaguy to remain as my statement about life and death and the universe.”

As the Guardian puts it, “Given that, until recently, Seaguy had a cigar-smoking tuna fish as a sidekick, this is no ordinary wish.”

•And speaking of the UK, Williamsburg, and immigrants, here, courtesy of the great Bananarama, is what NYC culture looked like to British eyes back in 1982, what with Boss Hogg chasing people all over Brooklyn.  Our rock videos about them were, of course, all full of bobbies drinking tea back then, I admit.
Posted by Todd Seavey at 10:31 AM

Email ThisBlogThis!Share to TwitterShare to FacebookShare to Pinterest
Labels: Culture, Dionsyium, Music, Sci-fi and such