Don’t Look Down While Using the System, Man! (plus Troll Stroll photos)

Fittingly, as this blog’s “Month of Systems” reaches its final week and America waits to see if marriage will be legally redefined, I find myself looking to recruit someone to argue the “nurture” side of a July 9 debate on whether sex roles are primarily a product of nature or nurture (arguing “nature” will be evolutionary psychology professor and fine human specimen Diana Fleischman).

I may have a lead on a transgender anthropologist interested in arguing the “nurture” side (as you might imagine), but one hates to count one’s chicks, etc.

Biology and mainstream culture both tend to be treated as straitjackets in some debates of this sort -- but you might argue that science/biology makes both mainstream culture and more subjective forms of radicalism look like shifting and arbitrary things by comparison.

I blogged in the previous entry, from my own skeptical perspective, about the mystical/spiritual outlook being at times a form of open-mindedness.  Of course, the main problem with views adopted from gut instinct or aesthetic preference is that they will tend to be arbitrary and nonetheless to get asserted as if descriptive of external reality.

And so, for one thing, we find ourselves awaiting word from the Supreme Court this week about whether gay people can marry, largely because some people think God says they can’t -- though that’s admittedly making a long story I’m not terribly interested in short, etc.

But I picked up a couple religion-inflected free magazines at a Columbia conference on marriage where my friend Dawn Eden spoke -- an issue each of Touchstone (January/February 2013) and the conservative Intercollegiate Studies Institute’s mostly-sane Intercollegiate Review (Spring 2013) -- and they’re both reminders that mainstream religious claims, just like seemingly-odd mystical or paranormal claims, are at least usually footnotes to a much larger system that at least looks more harmonious taken as a whole than it does when examined only for its oddest or most offensive footnotes.

Further, both magazines are conscious of defending an entire worldview against rivals such as liberalism -- and that can have some interesting side effects such as a Touchstone article contrasting the optimism of C.S. Lewis’s sci-fi novels (less familiar, perhaps, than his Narnia fantasies) and H.P. Lovercraft’s horror.

As I’d noticed myself, there are many similarities in tone and approach between the two -- lots of ominous intrusions from barely-comprehensible higher dimensions in a very early-twentieth-century style -- but in the end Lewis thinks the universe is structured this way because someone up there likes you, whereas Lovecraft’s universe is an unfeeling, almost sociopathic void in which you don’t matter.  In the era of eugenics’ greatest popularity, Lovecraft was both an atheist and a bit of a fascist, and not too happy about either role.  (Not everyone is a well-adjusted skeptic and biotech enthusiast like me.)

But the ultimately arbitrary (or at least psychology-dependent) nature of spiritual claims can lead to much weirder places than overall optimism, pessimism, or limited conceptions about the nature of tradition.

I only just learned that an online acquaintance of mine -- when not being an underwear model, rock singer, libertarian, and yoga instructor -- is also a
believer in reincarnation who thinks she has past lives.  Start thinking like that, and next thing you know you’re leaping to conclusions such as thinking a child who talks about WWII must be a reincarnated fighter pilot instead of merely having been to a museum at an early age (to take one very real, and rather stupid, case that got unwarranted national press attention despite being very easily explained with a bit more digging).

People are (of necessity) mentally lazy and prefer big “package deals” when it comes to philosophy.  The responsible intellectual cannot demand that they immediately explode/abandon all their systems but must continually remind them they are engaging in this oversimplification and system-building.  It may be natural but can easily go too far.  The intellectual’s job, at the risk of sounding like a curmudgeonly killjoy, is largely to make sure people don’t get carried away.

It’s not that we skeptics are just callous naysayers.  For a skeptic like me, watching humanity try to navigate reality on the basis of faith is about as nerve-wracking as watching Nik Wallenda tightrope-walk without a tether across the Grand Canyon for about twenty-three minutes last night, constantly thanking God for his survival.  So far so good, but... 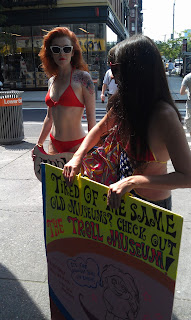 P.S. Of course, if your system is merely art or fiction, and you admit that, most harm can be avoided.  And so it is that a man can be very wary of government, religion, mysticism, and gurus -- and still applaud things like the Troll Museum and attendant Troll Stroll I saw on Saturday, with hosts Rev. Jen and her sidekick, burlesque performer Scooter Pie.

Sure, it was odd, but was it that much stranger than the systems that produced the giant shoe-shaped advertising truck I saw a few hours earlier in Central Park -- or for that matter the truly pseudo-scientific holistic/organic lactose-free ice cream truck for dogs parked nearby in the Park that day? 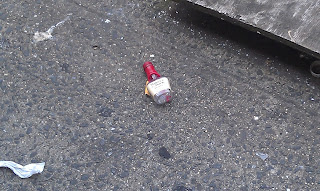 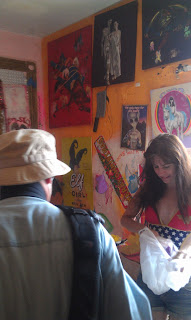 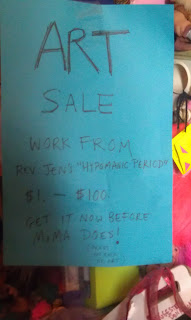 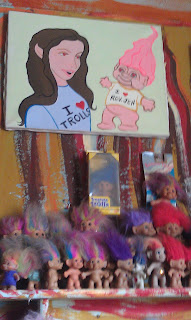 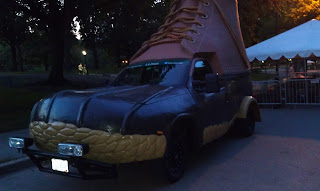 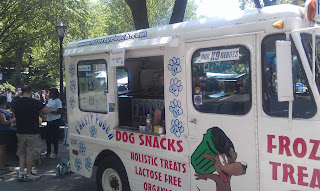 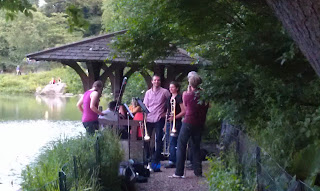