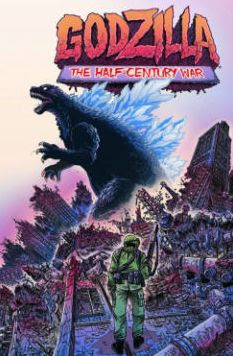 •Long, oft-told story short: comic book superheroes (and some sci-fi characters) have undergone so many revisions over the past eighty years that the writers eventually, inevitably, want to do stories in which different versions of the same characters meet each other.  Thus, for example, DC Comics’ periodic “Crisis” stories in which characters hop universes to meet, say, the World War II-era versions of themselves.

DC just put out a sixth (and probably second-to-last) volume of Crisis on Multiple Earths stories of that sort that they did prior to the big 1985 team-up in which they smooshed all their fictional universes into one for simplicity (at least for a couple decades).

Stories like these will likely have at least a little influence on the tone of eventual Justice League movies, though for now it sounds far more likely DC’s parent company, Warner Bros., will focus on Man of Steel sequels.

These stories will also be echoed in an explicitly meta-fictional fashion by my favorite comics writer, Grant Morrison, in his upcoming Multiversity miniseries, riffing on the rarely-mentioned but intriguing idea that some DC Comics universes are considered “fiction” (and read about in comics) by the inhabitants of other universes.

•As befits this blog’s “Month of Systems,” it’s all evidence that the nerd mind specifically, and the human mind generally, likes to weave sufficiently complex things into more tidy and elegant systems, for good or ill.

You’d think Godzilla – being a big, dumb, lumbering reptile-monster instead of a confluence of alternate realities – would be less prone to such systematizing efforts (Destroy All Monsters! and the fragile ecosystem of Monster Island notwithstanding), but in the beautifully-drawn (and now anthologized) comic book Godzilla: The Half-Century War by James Stokoe, you can see a bit of the systematizing nerd-impulse at work.

Stokoe takes the (over) half-century of depictions of one of the most famous monsters in movie history and asks what it might be like if the creature had actually lived that long and been tracked (and periodically fought) all that time by two determined, stoic military men.  The result is great balance between the tone of the movies I loved as a four year-old and the bittersweet tone of much manga and anime.

You might read it as prep for next month’s heavily Japanese-influenced, robots-vs.-giant-monsters movie by Guillermo Del Toro, Pacific Rim.
Posted by Todd Seavey at 4:15 PM

Email ThisBlogThis!Share to TwitterShare to FacebookShare to Pinterest
Labels: Book Selections, Culture, Sci-fi and such