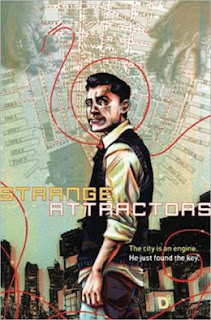 Just the other night, I saw my mathematician friend Charles Blake talk about the impossibility of time travel as part of a panel at the Empiricist League -- and recruited decreasingly-Marxist activist Sander Hicks to be one of the Dionysium’s speakers on the topic of Bitcoin on August 12 -- so I was in the perfect mood to read a strange story about math.

The graphic novel Strange Attractors by Charles Soule and Greg Scott is perfectly timed: It depicts secretive mathematicians who can predict human behavior with such reliability that they take it upon themselves to save complex systems such as New York City itself from chaos, including bomb-making terrorists.

(And I type that while hearing, for a few weeks now, the steady, very quiet thrum of what are likely, a friend in the military agrees, permanent drones over the Upper East Side -- which I’m relieved to say I’m not the only New Yorker to have noticed in the wake of the Boston bombing, though I may have been one of the lucky few to notice the night of their deployment, or at least to have seen a larger, more conventional helicopter flying around here, oddly low, at about 4am one night several weeks ago, after which a much quieter rotor noise has never fully stopped, impossible though it is to hear when there’s substantial street noise.  All this was just a few months after a couple speeches by Bloomberg saying drones would soon be adding to our safety in the way street cameras do, though I thought little of his comments at the time.)

The mathematician main characters are instead Columbia academics, an elderly mentor and a young acolyte, the latter a Gen X alternative rock fan after my own heart, proud of his Talking Heads collection and familiarity with some rising Brooklyn bands.

Despite the presumptuous main conceit of the comic -- that these eccentric professors can save the City from disaster with tiny, random-seeming acts such as musical performances and strategic graffiti -- Soule does a great, dare I say it Hayekian, job of capturing how complex the City is and how hopeless would be the task of any real-world central planner trying to coordinate it all (but how exhilarating it is to be a part of it all nonetheless).

Our mathematician heroes function less like Asimov’s planner Harry Seldon (one of Paul Krugman’s favorite characters) and more like unwitting chaos-theory butterflies, occasionally nudging things in a better direction but barely understanding how.  Soule has also written the ecology-themed Swamp Thing for DC Comics -- and, after all, one can appreciate the fragile complexity of both markets and ecosystems, though they so rarely get spoken of in the same breath.  There’s nothing wrong with Superman and his ilk -- I’ll see the Sunday 6:45pm show of Man of Steel -- but do check out Strange Attractors for something a bit more grown-up and artful.

Zack Snyder directing Man of Steel reportedly meant Darren Aronofsky not directing it -- just as Aronofsky’s decision to direct Black Swan stopped him from directing the impending RoboCop remake, for good or ill.  But those hankering to see something sci-fi-ish from Aronofsky can take heart that the fifteenth-anniversary edition of his film Pi is out -- and the film probably had more than a little influence on Strange Attractors, so maybe you could get them as companion pieces.  (Oddly enough, come to think of it, if they ever made a movie out of Nassim Taleb’s totally unrelated, math-inspired book Black Swan, Aronofsky might still be the man for the job.)

It’s often been remarked, amidst the recent overlapping controversies over spying and data-mining, that one reason there isn’t even more outrage over
government snooping is that we voluntarily give up so much analyzable information about ourselves every time we use Google, Facebook, etc.  Despite the complexity of these (and so many other) technological/ethical issues, I think the basic private-vs.-government distinction proves its usefulness once more: Unsettling as hyper-personalized service may sometimes be, you’re still choosing to participate in it, whereas government can’t be opted out of.

The difference remains as morally essential as the difference between a vacation and a kidnapping, no matter how much fuzzier the distinction may seem than the (now generation-ago) contrast between the collapse of Communist central planning and the rise of the Internet.

In some sense, those in government intuitively understand the difference: As individual control and privacy options diversify, government gets ever more paranoid that unobserved individuals and actions are slipping through its grip, which becomes tighter even as more and more human action eludes that grip.  It knows it’s losing control and cannot be satisfied with anything short of total surveillance now.  But it will never achieve anything more than an illusion of control.  Better by far to just let go.

Speaking of government and/or authoritarian machines, Arnold Schwarzenegger says he’s playing the title role in Terminator 5 next year, after several false starts (according to the same site that noted the anniversary of Pi).  Here’s hoping James Cameron still decrees the series’ end in 2018 (’cause enough already) and thus that this film or the next really ends it.

Like many libertarians, I once had high hopes for Arnold as a governor, hopes soon dashed.  The cynicism of fictional libertarian bureaucrat Ron Swanson from Parks & Recreation may be more realistic than any hopes for politicians, though -- and I’m delighted to learn that Ron Swanson was likely inspired by similarly-named John Swartzwelder, the reportedly-libertarian most prolific Simpsons writer (who is friends with a Parks head producer).

Interestingly -- in keeping with my note above about markets and ecology being more analogous than people sometimes recognize -- Swartzwelder, despite reportedly hating bans on guns and cigarettes, also wrote some of the most eco-themed Simpsons episodes (and for a decade now has mainly written comedy detective novels).

It’s a complex world, and it contains odd and unexpected ripple effects.

Perhaps something surprising will come of me handing libertarian mathematician Jorge Sawyer a copy of the recent Critical Review issue about the limits of predictability within complex “systems analysis” the other day, when we both attended a talk about the history of anarchism at the Jefferson Market Library (the speakers were too left-anarchist to appreciate the aptness of the place’s name, I fear).  I’ll say more about that issue in my next entry, though.

P.S. Speaking of libertarian/environmentalist overlap, when Dan Greenberg and I were on the road to the recent Brown University reunion weekend, we saw a truck on the highway with a big pair of flapping flags in the back -- the U.S. flag and the “Don’t Tread on Me” Gadsden flag now associated with the Tea Party -- but also with a PETA sticker on the back.  No reason one couldn’t support all that, but you don’t see it often.
Posted by Todd Seavey at 8:01 PM

This book is a fascinating exploration of the strange and often inexplicable phenomenon of attraction. Charles Soule and Greg Scott have done an excellent job of investigating the science behind attraction and providing readers with a greater understanding of this complex topic.