BOOK NOTE: “Superwealth” by Max Borders (plus the Man of Steel and a dash of punk) 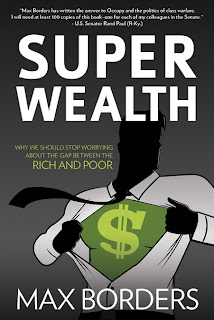 For all its simplicity and flashiness, I for one loved Man of Steel and felt as if it resembled the 1930s Max Fleischer cartoons in its unapologetic emphasis on the visual and the large-scale (very operatic).  It’s really the only major film I’ve so far seen that made me glad I paid for IMAX and 3D.  And it’s not without emotional or moral gravitas: You will FEEL before Zod.  And if you’re a libertarian, you’ll like a couple timely surveillance jokes, too.

If you’re a libertarian who likes Superman-ish metaphors and wrote a book defending super-wealthy entrepreneurs, you might well be my friend Max Borders, whose Superwealth has a superheroic-looking figure sporting a dollar sign on its cover, sure to delight Ayn Rand fans.

But Max is a down-to-earth, humane fellow not just interested in defending the tough-as-nails qualities of mega-CEOs.  He jumps back and forth between examining a few of those and a few likable, ordinary mortals such as his own great-grandmother, who eked out a living during the Depression in North Carolina (a state full of interesting characters) and lived to be 104, showing in the process that the psychological traits leading to success are recognizable, distinct, and valuable regardless of one’s initial economic circumstances.

We aren’t afraid to say athletes might start with some natural (or early-developmental) differences that set them apart from the rest of us, but it’s unfashionable to call adept entrepreneurs natural talents – or even to admit how hard they drive themselves – since that risks undermining envious, egalitarian, and compassionate narratives alike.

Yet even arch-capitalist Adam Smith – with what to me seems like a very appropriate and very modern mixture of awe, thanks, worry, and pity – wrote in Theory of Moral Sentiments that there’s something a bit miserly and abnormal about the way the very rich drive themselves to achieve profit – with the rest of us largely benefiting from their heroic mania.  (Maybe leftists would find it easier to view money-making as a weird yet creative activity if they read this article, pointed out by Emily Richards, about rich punk musicians.)

In much the same way that I’ve occasionally noted my own still-living grandmother as a neat yardstick of how much things can change in a lifetime, Max notes that despite all the despairing and declinist talk you hear, his great-grandmother saw the proliferation of everything from tractors and electric milkers to refrigerators, indoor plumbing, and colonoscopies during her lifetime, all the while hearing that “the poor get poorer.”

Mama Borders lived a noble, hard-working, and non-famous life while professional whiners like Barbara Ehrenreich explain how we’re all economically doomed because she didn’t fully enjoy the menial jobs she took on a journalistic whim.

There are some basic attitudes toward wealth-creation that people on both right and left seem to share: Max notes how many creative companies seem to share the view that every employee should function with some degree of autonomy and be rewarded as an individual for innovation.

By contrast, when it comes to the big-picture economic models, leftists keep saying things that suggest they see wealth as something that happens automatically and effortlessly, making the rich and entrepreneurs creatures easy to, well, milk.  Max quotes Obama advisor Jared Bernstein saying “there’s no reason to expect people to respond to higher tax rates by working less.  That is, they could just as easily decide to work harder to make up the loss in their after-tax income.”

So, hey, stick it to ’em some more.  (Adding to the
perverse effects of this attitude, notes Max, is the pattern of the very-rich and very-driven sometimes shrugging off the effects of taxes but the poor, who should be the last people we want to discourage, being quicker to give up or just take more leisure time if their work goes unrewarded.)

Max laments the post-Cold War resurgence in ideas such as “social justice” that underlie the attitude that the rich are but a resource to be maneuvered about according to public need (I’d add that this idea has made disturbing inroads even among some libertarians, in the so-called liberal-tarian or Bleeding Heart Libertarian faction, as if the high-minded moral schemes of the intellectuals haven’t done enough damage to warrant keeping them humbler).

In the end, though, it’s a very optimistic book at a time when people are less likely to mention markets and optimism in the same breath than usual.  He ends by noting that the U.S. is slipping in indices of economic freedom and thus of prosperity, but the basic entrepreneurial American character traits he describes are, thank goodness, not easily extinguished and will triumph yet.

Max also edits the Freeman magazine from the oldest libertarian thinktank, the Foundation for Economic Education, and next time I’ll blog about him and other writers there touching on more-spiritual-than-usual themes for libertarians.

P.S. Another Superman note: I figured, come its next wave of newly-announced comics, for October, DC Comics would likely unveil more Superman stuff if Man of Steel was a hit ($200 million and climbing!).  What I did not anticipate is that the Brooklyn guy who wrote that beautiful math-themed graphic novel I blogged about last week (and who was nice enough to tweet at me saying he liked the blog entry), Charles Soule, will be writing an ongoing Superman/Wonder Woman comic book series, featuring the two as both a crime-fighting and romantic pair.

(In the comics right now, Lois and Clark haven’t supposedly yet started dating – she still really believes he’s human and kind of a dweeb in the current comics reality, though not as dweeby as classic Clark was.)

Superman + Wonder Woman would probably sell like hotcakes even if an idiot were writing it, but Soule is good, so fans should be grateful.
Posted by Todd Seavey at 3:29 PM

This is one of the coolest rings I've ever seen! Plus the Man of Steel and a dash of punk makes it even more awesome!

Superwealth is an interesting book that covers a lot of ground. The Man of Steel section was particularly fascinating, as it delved into the history and psychology of Superman.