My “Month of Media” ends with a bang, with the biggest possible media announcement – not the presidential election, hurricane, or formation of hybrid publishing company RandomPenguin(!).  I mean, rather, a new Star Wars trilogy (in 2015, 2017, and 2019).  This brings both post-Lucas hope and pre-Disney fear (and the news hits right after I announced my #WheDONT boycott of Whedon-overseen Avengers movies, which are also from Disney; the boycott still allows me to enjoy this photo of an actual hedgehog dressed as Thor, though).

But let’s check out news from five other major fantasy franchises – and five thematically-appropriate accompanying storm photos Todd took – shall we? 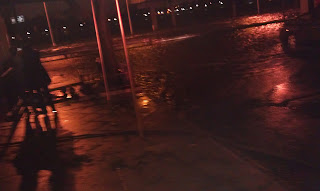 •The floodwaters seen (darkly) lapping at the intersection just east of me Monday night, which completely covered the FDR, caused a small transformer fire that led to me briefly taking shelter at Dan Raspler’s apartment a few blocks away, where I saw Game of Thrones for the first time and liked what little I saw (and by little, I mean Peter Dinklage).  I am also indebted to him for the joke Disney-buys-Star Wars pics above. 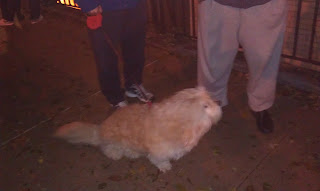 •In a month and a half, of course, we won’t need these derivative fantasy franchises because the first of three annual Hobbit movies will be on the big screen (featuring creatures as oddly squat as one dog hanging around along with the temporarily-ousted building occupants the other night).  The way Tolkien’s almost nineteenth-century-style Tory Catholic agrarianism ended up appealing greatly to hippies is only one of many forgotten ways that the left and right have cross-pollinated over the past two centuries, despite our pretense come election time that they are eternal, immutable opposites.

(I often wonder just how different historical political outcomes that seem necessary and logical to shallower thinkers today might in fact have been – as, for example, with the animosity between the right and gays, which might have worked out very differently if the first prominent lesbian writer, Radclyffe Hall, a self-consciously conservative and aristocratically-garbed woman, had not eventually been driven into the arms of the left.)

Margaret Thatcher, at least, has one fan among the celebrities most associated with Tolkien: John Rhys-Davies, who played Sallah in Raiders of the Lost Ark, Gimli in Lord of the Rings, and the voice of General Grievous in Revenge of the Sith, is described in part thusly on Wikipedia:

Rhys-Davies holds politically conservative views.  As a university student in the 1960s, he had been a radical leftist, but changed his views when he went to heckle a young local member of parliament, Margaret Thatcher.  Rhys-Davies says that "she shot down the first two hecklers in such brilliant fashion that I decided I ought for once to shut up and listen."

He learned not to be a Douche-o Baggins his whole life, and you can, too.  You have the power within you.

•Kyle Smith and Daniel Radosh disagreed online about whether Cloud Atlas is good – I’m still planning to see it and remain cautiously optimistic – but it has not been well-received enough to get transformed into a franchise or anything (it depicts people leading multiple lives across centuries – in much the same way that the neurotic Parker Posey character from Best in Show seemed to live again in the form of a temporarily-displaced yuppie chick saying of her bulldog the other night “He’s freaking out!” – see her leg and dog nearby).  Luckily, the industrious Wachowskis reportedly have a potential sci-fi franchise in the works called Jupiter Rising.  I continue to give them the benefit of the doubt.  Even when they fail me, they do so in more interesting ways than other directors and producers.  And I liked Speed Racer enough to buy the DVD.

•The biggest driving challenge on the Upper East Side right now, though, is maneuvering around fallen branches.  Call them Skyfall, if you will – and you can call the one November film release about which I care that as well.

This Best Bond Themes ranking by DarkHorizons.com seems about right to me – and even the quirky-but-interesting effort to elevate the “On Her Majesty’s Secret Service Theme” to the top tier makes sense (indeed, I’ve found myself humming that without knowing which of the films first used it).

But enjoy the glamorous, sexy version of spying while you can because December 19 brings Zero Dark Thirty, Kathryn Bigelow’s film on bin Laden’s death.  That weekend will not bring a Mayan apocalypse, but her film would be an apt time to bring all the international conspiracies to a head. 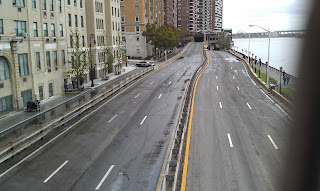 •The X-Men film franchise (which does not fall under my Whedon-Avengers boycott, please note) reaches its climax in 2014 with the First Class cast meeting the Patrick Stewart cast – and giant mutant-hunting robots called Sentinels – via time travel in X-Men: Days of Future Past, which will be directed by Bryan Singer rather than Matthew Vaughn, it has just been reported.  Probably just as well.

But my fondest wish right now is just that friends like leftist cartoonist Danny Hellman and my anarcho-capitalist pals, the perhaps-most-radical of whom was sparring with Hellman online this week, will live to see calmer days after the imminent election.  I think I’ll take a really big break then from online scuffling – and online activity in general – myself.  Here’s hoping we don’t all end up in government-run internment camps like the mutants in the “Days of Future Past” story – or like Japanese-Americans under the tyrannical FDR, after whom was named the east-side highway seen above sporting an unusual lack of cars.

However the election turns out, my left-wing friends, if they can remain calm for a moment, probably should take heart from the fact that Romney really is (admit it) pretty moderate, to the frustration of Gary Johnson-voting libertarians like me.  You know, there were more writers expressing their intention to vote for Obama among the contributors to American Conservative magazine this year than there were among the contributors to a comparable Reason magazine forum.  Conservatives are very unreliable at this late stage and history and probably shouldn’t scare anyone much.  They’re faded ghosts now.
Posted by Todd Seavey at 2:18 PM