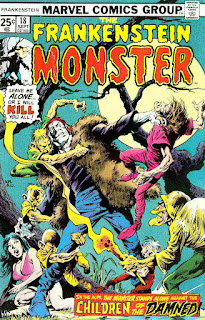 •As noted yesterday, I’m boycotting Joss Whedon and the films he oversees.  However, I’m not losing my love for all Marvel projects, including the swell Frankenstein image nearby [MAJOR UPDATE: Luckily, I'm also not boycotting all Disney projects, since Disney, which also owns Marvel, has acquired LucasFilm and plans to make Star Wars: Episode VII in 2015 -- h/t Chuck Blake, and more on Lucas himself below].

It’s only one of countless variations on Mary Shelley’s idea, of course: Here in its entirety is Thomas Edison’s Frankenstein – a century-old movie adapting a novel from a century earlier.  Yet the film is far stranger than the novel, really.  In Edison’s film, the monster simply ceases to exist at the end, fading into a mirror because Victor refuses to love him and instead bonds with Victor’s new bride.

•My boycott of today consists of me urging people to stop subscribing to the New York Times after their opportunistic board editorial opining that a “Big Storm Requires Big Government.”  Does anyone think the reasoning behind the Times’ opinions is more sophisticated than an eight year-old’s?  FEMA shouldn’t be privatized in the middle of a storm, but everything can be privatized.  Yes, everything.

At least Mayor Bloomberg declined to muse about whether one hurricane constitutes evidence of manmade climate change.  Gov. Cuomo was not so cautious.  Ironically, though, two of the people I’ve personally encountered here most worried about climate change are spouses of two of my fellow former John Stossel producers.

One of the climate-worriers in question is John Hockenberry, himself also a TV producer, and the Frontline episode he did attacking climate change skeptics itself comes in for skepticism in this column, which debunks the oft-repeated claim that 97% of active climate researchers believe humans are a significant cause of global warming.

The column is a neat window into what a statistician friend of mine says is a pattern of climate alarmists abusing statistics.  Make the numbers fuzzy enough and you can produce an apparent consensus on almost anything – then spin it as if you got everyone to agree on the worst-case scenario instead of the basics: not merely that, yes, there is such a thing as a basic greenhouse effect but that doomsday is imminent.

Statistics abuse is the great, rarely-noted Achilles heel of the climate fear-mongers.

•A greater danger than rising oceans is of course aging, as revealed in a comedy clip of people playing Existential Crisis & Dragons.

•Also funny – and also true – is comedic confirmation that George Lucas is not merely inept but actually evil.

•Oddly enough, David Lynch passed up the chance to direct Return of the Jedi.  We will never know what that might have looked like – perhaps a bit too much like Dune.  But we do have a short Lynch film from 1970 (over forty years ago, and seven years prior to Eraserhead).  It’s definitely Lynch – and with a hint of Terry Gilliam influence, I’d say.

•Lynch does “vague but ominous” in a fashion worthy of H.P. Lovecraft, though Lovecraft’s clearest influence on film in general may be the plethora of storylines out there which, like Lovecraft’s At the Mountains of Madness, involve ancient alien evils being unearthed in Antarctica (including the first X-Files movie, Alien vs. Predator, and more, arguably including Lovecraft fan John Carpenter’s take on the John Campbell-based Thing).

•I also associate Lovecraft with the more familiar environs of Providence, RI, where he lived (when not living in NYC) and where I went to college.  My fellow Brown alum Dan Greenberg notes a map of Lovecraft’s Providence-like fictional town of Arkham.  Since Providence has a Euclid Avenue, I only wish Lovecraft’s map had included a Non-Euclid Avenue.  Ha!

•I also read the Stephen King short story “Fair Extension,” about a man who makes a deal with the Devil – and doesn’t really regret the devastation it wreaks on the life of his best friend.  It’s a great, disturbing little portrait of jealousy.

I read it along with the non-fiction King book Danse Macabre, his 1981 tome about his overall “Dionysian” philosophy of horror, recommended by Gerard Perry.  I’m not a King fanatic, but I can understand why so many people are.  He’s easygoing and easily digestible but manages to come up with at least one clever or funny idea per page.

This book includes King’s observations on such important topics as
the E.C. Comics he grew up with, the question of how ugly you have to be to count as a monster, the primal appeal of I Was a Teenage Werewolf, why Cthulhu is like a vagina, what Linda Rondstadt said about the Ramones and hemorrhoids, outgrowing belief in the tooth fairy, King’s experiences dowsing at an early age, his father abandoning the family, the big impact Creature from the Black Lagoon had on him, the advantages of radio for making people envision the worst (War of the Worlds, for instance), Ray Bradbury and Twilight Zone as license to let fantasy run amok without clear explanations, the radio drama “The Chicken Heart That Ate the World,” the virtues of being an old-time radio buff, our fear of dying a “bad death” such as accidentally being crushed by an auto lift with oil leaking onto our faces, The Amityville Horror as a suburban real estate nightmare, a defense of John Frankenheimer’s mutant-bear movie Prophecy (which I saw as a kid but did not like as much back then as the original Battlestar Galactica, which King repeatedly insults), Burt Bacharach’s theme song for The Blob, the fear of troubled places so important to The Haunting of Hill House and The House Next Door, the usefulness of the South for providing Gothic texture in a fast-paced modern world, King’s college-age encounter (not so unlike my own) with an unapologetically conspiracy-theory-prone Black Panthers member, the moralism of Something Wicked This Way Comes and horror in general, the lingering question of whether horror writers’ innermost layer is the moralist or the pervert, and how his novel The Stand grew out of his attempt to write about Patty Hearst and the Symbionese Liberation Army.

•Though I don’t pretend I can fully justify it, I’m now (before turning back to politics in earnest) reading a Star Trek: Voyager novel recommended by another friend, Star Trek: Voyager: Pathways by series co-creator Jeri Taylor (not to be confused with Jeri Ryan a.k.a. Seven-of-Nine, without whom there would be no President Obama for Romney and Gary Johnson to challenge this month, since it was her husband who dropped out of the Senate race against Obama after kinky revelations about their sex life, clearing the way for Obama’s 2006 victory).

The novel’s fine so far (though certainly not as cool as this magnificent trailer for the 2009 J.J. Abrams movie), but it’s a scary testament to how lame and non-iconic that TV series was that I’d nearly forgotten half the cast.  Harry Kim?  Kes?  A Klingon named B’Elanna Torres?  I mean, it sorta comes back to me now, but...this fuzziness of recollection doesn’t happen with Spock or Odo.
Posted by Todd Seavey at 1:31 PM