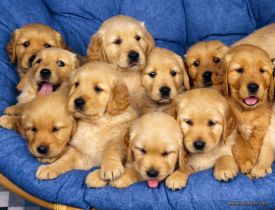 •Grant Morrison, despite being the quasi-revolutionary figure I wrote about for Reason, seems deliberately to have shoehorned several of the earliest Superman covers into the plot of last week’s Action Comics #1, writes Rich Johnston, with Superman stopping a train, facing a wrecking ball, frightening a corrupt guy with a drop off a skyscraper, and getting hit by a tank shell.  In retrospect, I thought some of the plot twists seemed a bit forced, but they were nicely Depression-era old-timey, which is kinda cool.  There are truths more ancient even than the Silver Age, my friend.
•Another ancient thing is that 1920s subway train I rode Sunday, a whirring old ceiling fan from which is visible above.
•Also visible above: a bunch of golden retriever puppies from the website of the show Comical Radio, which on Thursday at 12:30pm Eastern (98.7 FM) will feature amusing (and conservative) singer Hannah Meyers, who is arguably as cute as the pile of golden retriever puppies (I’m not the only one who’d say so – I’m just being objective).
•Somewhere in between the singer and the puppies is this Beasties video (not those Beasties) of Diana Schoenbrun’s do-it-yourself cloth monsters.  You can find her and her books about making such creatures at Maker Faire this weekend.
•Less funny, more overtly political – and harder to believe actually existing in the real world – is the Aimee Allen song about Ron Paul, as heard in her 2008 video.  It’s not quite Rush singing about Rand, but it’s got an admirable urgency to it that they do not, and I would dare argue that she’s cuter than Geddy Lee.  On the downside, she uses weird references to Satanic conspiracies that Rush would not deploy, but politics requires coalitions of differing perspectives.
•If you think Allen’s weird, at least she’s more mainstream than the person who appears to have posted a re-edited version (which I will not link) of her video meant to reveal the conspiracy of reptile men running the world.  Have we reached the point where there are more schizophrenics who fear the reptile men than ones who fear the CIA, I wonder?  Are there psych stats on that?  It’s fascinating to me that you can be completely out of your mind and still operate modern video editing equipment, though maybe I’m just old-fashioned.
•I am saddened to see Vimeo has deleted an old video by a pleasant-voiced narrator calmly explaining his impressive system of folding and sectional furniture and how it would by now be popular if local authorities didn’t conspire to beat him up.  My decision to attend an event about “seasteading” tomorrow is rooted in greater respect, though.
•The alternative to the world of secure property rights and civil liberties for which Aimee Allen longs is one in which men dressed as Gumby ineptly attempt to rob stores at gunpoint, as seen in the other picture above (and recently in the news).  And yet I must defend property rights.
•With the last big poll before last night’s debate showing GOP voters favoring Perry (30%), Romney (18%), and Paul (12%), I’m now leaning toward just wanting Paul to come in ahead of Romney, even if Perry’s the nominee.  I was torn about Romney, but his eagerness last night to beat up Perry for the heresy of criticizing Social Security means I must vow not to vote for Romney if he gets the nomination.  As so often happens, without me trying to be a weirdo, the person viewed as most acceptable to the mainstream is the one I must reluctantly declare morally out of bounds.
•Then again, a Perry/Romney ticket is looking increasingly logical (in the electoral-political sense of “logical”), and I suppose I’d hold my nose and vote for that (you can’t put two people from the same state on the ticket even if they want to be there, so there would never be a Perry/Paul ticket, whereas picking up votes from both the South and, potentially, my native New England is a winning strategy).  In the meantime, I’ll just be happy if Ron Paul’s reference to Austrian economics gets people Googling that topic, which unifies econ, psychology, politics, and philosophy like nothing else in this world, solving virtually all human problems.  But, hey, if you’ve got other things to do...
•Two reminders the world could be in worse shape:
(1) Al Gore’s doing a twenty-four-hour global warming broadcast tomorrow, and (2) a commenter from Brooklyn with the online handle Infra-Man made the following joke predictions about changes to be unveiled in the new DC Comics Universe:

Snapper Carr is now half-fish, half-car, and all attitude.
All Prez stories are now canon.
All DCNu characters were Robin at some point [except Stephanie Brown], including Thomas & Martha Wayne, Ma & Pa Kent, Wild Dog, Kamandi, and The Phantom Stranger.
Superman is required to cry and act helpless at least once in every issue.
JMS to initiate and then abandon a year-long story where The Flash drives a rental car across the country, always observing the posted speed limit.
Black Canary's sonic scream now involves her coughing carnivorous canaries at enemies.
Green Lantern emotional color spectrum will expand from 9 colors to 256.
•That last item was nerdy, but nerds can be cool.  Indeed, I think someone should do courses about turning nerds into “pick-up artists” based entirely on using Zaphod Beeblebrox from Hitchhiker’s Guide to the Galaxy (arguably the best book ever written) as the model “alpha” male.  It would at least be interesting to live in a world where women said, “I find him intriguing, but I can’t decide if he’s one of those Beeblebrox playas or just zis guy, y’know?”  The book about this technique would of course be written under the name Gag Halfrunt.
•Speaking of other planets: Know the Pokemon-like thrill of collecting information on real (albeit not necessarily inhabited) alien worlds, possibly the coolest thing ever.
Posted by Todd Seavey at 3:13 PM