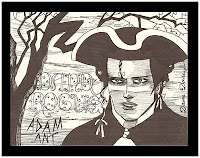 •Sept. 12: Romney sounded uncomfortable in last week’s debate being asked if he supported the Tea Party, as well he might, given his pro-government bashing of Perry for being too anti-Social Security, which may lead me to vow not to vote for Romney (and if he gets the GOP nomination, perhaps even to check out the decreasingly-relevant Libertarian Party again this year to see who they run).
If Romney fears it is unhip to don the tricorn, though, he should take note of gothy cartoonist Dame Darcy’s new portraits (see above) of Adam Ant as he appeared in my favorite rock video of all time, “Stand and Deliver,” as perfect a fusion of Enlightenment era and punk era as one could ask for (perhaps a model the Tea Party should heed).
•Sept. 17: Nice to see Ron Paul win the California straw poll, but, as usual, it’s a reminder small sample sizes are meaningless and easily skewed by the clever (as Ron Paul fans of course are).  Fewer than a thousand people participated.
•Sept. 18: That’s still more people than were left at the so-called “Occupy Wall Street” anarchist rally (with its chanted rewriting of the Constitution) by the time I strolled by twenty-four hours later on Sunday – on my way, coincidentally, to a more pro-capitalist anarchist bar gathering a block or so away.
I am less frightened of the left-anarchists than I am of screenwriter/director Harmony Korine, who started a documentary about fistfights (and abandoned it when he got hospitalized), who released a short film starring members of the alarming South African rap band Die Antwoord this year, and about whom Wikipedia says:
Previous to [his film] Mister Lonely Korine had written a story about a pig named Pistachio.  The film was to take place during a race war in Florida and have a boy who would saddle the pig, put adhesive on its feet, climb up walls, and throw Molotov cocktails.  “It was going to be my masterpiece,” Korine comments.  The script burnt in a fire, and Korine spent $11,000 trying to recover it from his computer.  He retrieved one sentence.
(Coming up with redesigns for the obscure and absurd comic book character the Red Bee is more my speed.)
•Sept. 18, Part 2: I only wish libertarians were faring as well as the alarmed and laughable Bill Keller of the New York Times made it sound in this concluding passage from his column on Sunday:
Against Obama we have a cast of Republicans who talk about the federal government with a contempt that must have Madison and Hamilton spinning in their coffins. The G.O.P. campaign sounds like a contest for the Barry Goldwater Chair in States’ Rights: neuter the Fed; abolish the Environmental Protection Agency, the Department of Education and a few other departments; turn Medicare and Social Security into individual 401(k) programs; dismantle national health care and revoke consumer protections. Rick Perry, who likes to rouse Texans by claiming the right to secede from the union, sometimes sounds as if he has expanded his view to encompass the secession of all 50 states. Even Mitt Romney – at heart a Republican technocrat (and the only candidate I’ve ever seen give a campaign speech with PowerPoint) – talks as if the main role of the president is to grant waivers from any kind of mandate upon the states. Such is the power of our new, centrifugal populism.
Do they really believe this, or are they just playing to the Ron Paul libertarian niche? Do you really want to find out?
So let’s get real. Yes, Obama could do better. But we could do a lot worse.
I may have to reuse that “centrifugal populism” phrase.  I like that.  But then, I’m the guy whose favorite 90s sci-fi show was Bablyon 5, which was full of near-libertarian pro-secession speeches like this.  You tell that corrupt Earth government, Capt. Sheridan.  (My single favorite moment on the whole show, though, was when Sheridan realized that his ex – played by the innocent-looking Melissa Gilbert from Little House on the Prairie, Bruce Boxleitner’s real-life wife – was possessed by a demon and so called in a tactical nuclear strike on her.  Make of that what you will.)
•Sept. 21: Tomorrow night, catch a debate of a different
kind as the ardent humanists of the Center for Inquiry hear from the (less human-centric) writer Dale Peterson – about incipient ethical instincts in animals (at University Settlement, 184 Eldridge St., 7pm).  I only wish he were debating against the other Dale Peterson, who has some expertise with animals – so listen up! – and who should also appear in every GOP debate.

•Sept. 22: In advance of the next GOP debate, which is two days from now, I can at least wonder – partly inspired by those Wall Street protesters – what the political realignment would look like if Ron Paul (who is, after all, solidly in third place in the GOP voter polls now) actually hung in there and got the nomination.  Forget about the short-term questions, such as whether he could beat Obama, and consider this:
If Paul won the nomination, would the neocons cooperate?  Would the business establishment?  (Would even the “liberaltarians,” given the emphasis some put on social/cultural issues that put them at odds with Paul?)  Imagine if they all drifted toward the Democratic Party, especially if hawkish and mercantilist Hillary Clinton rose in power within it.
And: would the antiwar, pro-drug-legalization, and progressive/anti-corporatist voters really stick with Obama in the meantime if they had Paul as a general election option?
Paul winning the GOP nomination, in short, might mean the biggest realignment in American politics since the 60s/70s, when the racists fled the Democrats and the antiwar people eventually took over the Democratic Party (for a time).
Regardless, there may be real crossover potential in the anti-corporatist trope – now more so than when the progressives just hated profits in general.  Bailouts we can all agree to hate.
I’ll tell you one thing that I don’t think will inspire anyone to rethink their whole ideology, though: those “TPAW STANDS WITH MITT” ads from Pawlenty for Romney.  Yeah, good luck with that VP slot quest, TPaw.  Yawn.  (Mitch Daniels yet lives, remember.)
•Sept. 24-25: Romney, governing the state that witnessed the original Tea Party, may not fully embrace the Tea Party of today, but this weekend, Harvard will – since the Tea Party is co-hosting a weekend of discussions there about the Constitution, which sounds like a wonderful sign to me.  (By the way, like father like son on Mitt the Rockefeller Republican: Mitt’s dad, George Romney, led the moderates against Goldwater in 1964.  The Romneys didn’t win then, and I hope they don’t now, come what may in the general election.  Re-defeat the Romneys for the long-term ideological good of the party, I say.)
Contrary to the paranoid tone of people like the aforementioned Keller, Eric Alterman, Amanda Marcotte, or even my fellow libertarian Will Wilkinson, I think conservative, traditionalist tendencies in the culture have been pretty well beaten into submission by the left at this point.  If your average leftist Ivy Leaguer is correct, though, in thinking social pressure (a.k.a. civilization as a function of myriad free individuals’ preferences) is oppressing us all even in the absence of resultant coercive laws, I’d say the demographic group whose social power is obviously excessive and must be curtailed is: women in their twenties.
Think about it.  Female children and older females want to be like them, and males are disproportionately attracted to them (it’s biology, so that’s not going to be changed by any vote or ideological pamphlet).  As a side effect, political and aesthetic ideas that are popular with this very ignorant, inexperienced, and often irrational segment of the populace are given undue weight.
Indeed, responsible, uncowed, intellectually-honest males should ask themselves whether feminism would even be a philosophical idea with any popular currency at all were it not for the fact that the people most vocally espousing it (contrary to some of the cruder old stereotypes) have tended to be young and pretty.  How it must gall the feminists to realize that they are being indulged largely because of the mental habits they claim to be fighting against.  Thus you get the sort of “Third Wave feminist derangement” I’ve repeatedly noted, whereby young women claim that, for example, (A) post-structuralism reveals you as a tool of prevailing ideology if you presume to think of them as sexualized beings, and yet (B) you should really, really attend their burlesque show next week.
I join the rest of the populace in saying, unequivocally: Whatever.  Get back to me in a few years when you realize the wrinkles are setting in and the feminism no longer seems to entrance listeners the way it once did.
Meanwhile, if you want to talk real politics instead of cultural babble: the elderly are taking all our money, since they are the group that benefits most from government transfer payments (not the poor).  If we can just stop the cultural onslaught of the young women and the elderly of both sexes, we’ll be doing all right.  To the extent this can be addressed through “consciousness-raising,” then, what we need is more male-centered discourse and less respect for our elders.  Let us hope that gets discussed at Harvard.  But I doubt it.
I just hope everyone there – and all of you out in blogland – keep in mind Bryan Caplan’s Ideological Turing Test: Strive to model your opponent’s thinking as human and well-intentioned, not demonic.  I always do, even though everyone is stupid.
Posted by Todd Seavey at 12:04 AM

And he even has a new book out. Daniels Echoes Perry Criticism