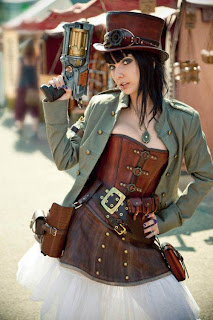 ToddSeavey.com Book Selection: The Steampunk Bible: An Illustrated Guide to the World of Imaginary Airships, Corsets and Goggles, Mad Scientists, and Strange Literature by Jeff VanderMeer with S.J. Chambers
This volume’s a tad haphazardly organized, but it’s such a lovely and handy compendium of things steampunk, chock full of gorgeous photos from today and period illustrations, that it doesn’t matter.  Not quite a true encyclopedia (with, say, alphabetized or chronological entries for reference), it nonetheless tells you what you need to know about how this strange movement arose, what its antecedents were, when it hit the mainstream, who the main players are, and what the distinguishing characteristics of the movement are.
The main revered ancestors described here are Jules Verne and H.G. Wells, though I was delighted to learn about “Edisonade” novellas of the 1870s, often depicting heroic boy inventors with mechanical ostriches and the like, that seem precursors not only to steampunk but to pulpy heroes like teen inventor Tom Swift, who was such an inspiration in my own youth, read decades after publication.  My all-time favorite comic book miniseries, The Adventures of Luther Arkwright, is also noted – as are scads of busty geek chicks posing for photos at conventions in combo bustier-and-cybernetics outfits.
It all seems to have taken off in the mid-80s, almost immediately after its more-consistently-futurist older sibling, cyberpunk, got rolling – though even cyberpunk had a certain self-aware-datedness element to it, not to mention an affinity for film noir tropes, something precursors to cyberpunk such as Michael Moorcock’s postmodern Jerry Cornelius novels and the film Alphaville had as well.
An Arkwright film would thrill me by combining several of my favorite tropes – not just steampunk (including giant airships belonging to an alternate-history twentieth-century Prussian Empire) but Bowie, anarchism, and the multiverse.  Coincidentally, this same week I was reminded by the Wikipedia entry about oddball political pundit William Lind (not Michael Lind), who expressed a desire for telegraph access not long ago and admires Kaiser Wilhelm II, of just what an oddball the Kaiser himself was (and he lived, exiled from Germany, until WWII, waxing and waning in his anti-Semitism in part, it seems, due to whether he was on good terms with the monarchy-ignoring Nazis back home at the time).  They are both rather steampunk, inadvertently.
What fascinates me in a way about steampunk – and this may just be further proof that I am destined always to be an observer rather than a fully-immersed participant in any subculture – is the thought that countless other subcultural combinations with just as much internal logic (and potential beauty) are possible.  There could be Enlightenment-punk using eighteenth-century styles, to be sure – and there’ve been enough faux-early-twentieth-century projects (in fiction and fashion) for the term “dieselpunk” to crop up at least a few times on Google.
Will steampunk fade away – or do we stand on the verge of the floodgates opening and thousands of mix-and-match, ironic, era-combining mini-movements arising?  I’d love to see the latter.  At those coming Williamsburg events I’ve been teasing, I will even encourage it, if I can.
APPENDIX: CYBERPUNK AND STEAMBILLY
As far as I know, there hasn't yet been a great, highly
popular, and definitive steampunk movie -- though twee director Rian Johnson (Brothers Bloom) and twee director Michel Gondry are each working on a time travel movie, for good or ill.  Not sure if it’ll be twee time travel.

(On an unrelated time travel note, I loved it when Homer thought the smart, bespectacled kid who looks just like Bart but comes from a rich family -- and who told them Bart is in danger -- was "future Bart" come back with a prophetic warning.  As if Bart will remain the same physical age in the future but develop better diction and worse eyesight.)
Cyberpunk, by contrast -- the more twentieth-century-o-centric movement that spawned steampunk as a retro spinoff -- is all over the big screen and the small screen.
In 1999 -- the same year Matrix came out -- there was even a short-lived Canadian sci-fi series blending elements of the Dick-inspired Total Recall and Blade Runner universes, called Total Recall 2070.
Jeez, as if it weren't weird and postmodern enough that Blade Runner, in addition to being a masterpiece of design by Syd Mead and direction by Ridley Scott, is itself a fusion of works written by Philip K. Dick, Alan Nourse, and William S. Burroughs.  It's true.
(I would not deceive you.  Burroughs wrote a film treatment based on Nourse's novel about black-market doctors and scalpel-smugglers, and all Scott kept was the idea of a vast city and the title, to which he added Dick's replicants.  I can't decide which Los Angeles is more postmodern, the 1982 one or the 2019 one.)
And if the day ever comes when they attempt to make a hip subculture out of North Carolina hillbillies, I recommend using as a model this (non-joking) video of a man from that state describing his purported encounter with Bigfoot.  Reminds me a bit of that ad for Season 5 of Squidbillies.
And as the tenth anniversary of 9/11/01 approaches, let’s finish this entry off with Hard n’ Phirm’s moving, epoch-spanning song “American Dinosaurs.”  The only thing that I can top that with tomorrow, of course, is Superman.
Posted by Todd Seavey at 5:07 PM

Email ThisBlogThis!Share to TwitterShare to FacebookShare to Pinterest
Labels: Book Selections, Culture, Sci-fi and such

I, too, love this book. And there have been plenty of movies that incorporate the Steampunk aesthetic, or that are directly based on Steampunk novels or comics, but none of them are remotely "great, highly popular, or definitive."