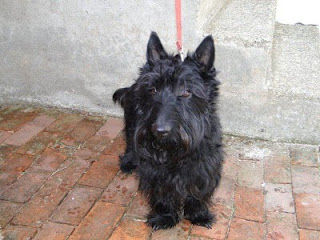 Aye, b’hold McGregor (a.k.a. Mac), ma parents’ nyew Scottie!
This is dog #3 for the Seavey household, Uber having passed away in 2005 after sixteen highly acclaimed years and her successor Jaycie having passed away earlier this year.  Given the dogs’ names (unplanned except for Uber, since the other two were taken in from other people), I like to think of them as my parents’ Nietzschean, Junior Chamber of Commerce, and Scottish Enlightenment dogs.
This new lifeform enters the Seavey household the same weekend that reports surface that scientists may have stronger evidence of simple microbes existing in meteorites, and thus life existing beyond Earth.  Let us hope the three Seavey cats (the less artfully named Salty, Pepper, and Meow) get along with the alien in their midst – or at least better than the cats in this video clip get along with this angst-ridden spider.
In other stupid-animal-video news, I think I actually saw this highly talented and very enthusiastic skateboarding bulldog with the naked eye outside the News Corp building when I was working there last year.  I would certainly rather watch him in action than watch an actual sporting event, and I am baffled by the press’s continued practice of interviewing athletes, which seems almost invariably utterly pointless.  Maybe I’m missing nuances since I’m not a sports fan, but it seems to me that almost every clip of a talking professional athlete after a game sounds roughly like this:
“Well, we’re glad we won, and we realized going in, y’know, that we would have to play well.  The other team put up a really good fight, but we managed to beat them on offense and also on defense, and I think there were times when we thought we might lose, but in the end we managed to get more points than they did, and that was really what put us over the top in the end, so I’m just glad that we had a victory instead of a defeat, and I hope the next game will also be one that we can win, which would be something everybody here would feel good about, whereas if we lost, it would be hard.”
Duuuuuuuuuuuuuuuuuuh.  (I was pleased to see Christopher Hitchens – no wuss – mention in his recent memoir that he does not fully understand and does not at all share his fellow males’ emotional investment in the outcome of sporting events.)
Getting back to animals, though: I had the dubious honor of meeting the woman whose pug puking on the subway sparked heightened tension between Williamsburg’s hipsters and Hasidim (and I met the pug), and I see that n + 1 last month had an essay on the hipster/Hasidim parallels and conflicts.  I trust McGregor will spark no comparable battles in New England – though he might well feel conflicted loyalties if he ever travels with my parents to Nova Scotia.
Posted by Todd Seavey at 6:00 AM

Okay. Thank you for that. The combination of that nutshell history of the Seavey companion animal dynasty with that startlingly authentic pro-athlete interview just kind of made my day.

a professional athlete would never use the word "whereas."

Well, y'know, heretofore I been focused on the game, not so much on the words and what all. Contrariwise, if the press is asking us if we're up to the challenge, and I think we can do it.

A show so funny that even an athletic agnostic can enjoy its comedic stylings.

I sincerely doubt that any sports fan would claim that his/her fandom arises in any meaningful way from the inanity of the typical "you-want-to-play-good-you-hope-you-play-good-I-think-we-played-pretty-good" athlete interview.

I don't consider myself a sports fan, but I can and do appreciate the aesthetics of certain sports like baseball and curling, and can allow that others find similar aesthetic beauty in other sporting events. And I can admire true athletic achievement with the same "look-at-what-human-beings-can-accomplish" awe with which I might regard well done art or performance. And I can even enjoy interviews with athletes more involved and nuanced than the ones typically given at the close of a game.

I suspect that very few people who admire sports come to that admiration from the typical athlete interview. At least, not since the days of Ali/Cosell...