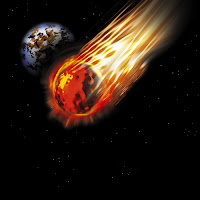 Yesterday, I mentioned meteorites that may carry signs of life, so for balance it's only right that today I discuss the asteroid that has just the tiniest smidgen of a chance of bringing death to us all.  Follow me now...
In an odd confluence of cultural and physical influences, I see that the Egyptians feared an anti-Ra god named Apep, bringer of darkness, who was called Apophis by the Greeks and came sometimes to be regarded as synonymous with the serpent-god Set by the Egyptians.
Both Robert E. Howard and H.P. Lovecraft made use of this demonic version of Set, and Howard's depiction of the Serpent Crown has been repeatedly used by Marvel Comics despite ambiguous property issues (Set has also been imitated in Marvel stories by the powerful, ancient ur-mutant named...Apocalypse).
A recurring villain in the gods-themed, long-running sci-fi franchise Stargate is called Apophis.
The scientists who discovered one particularly large near-Earth asteroid are reportedly Stargate fans -- and named the asteroid Apophis.
Apophis happens to pass near the Earth in late 2012, no doubt causing a frenzy among the Mayan-prophecy paranoiacs (some of whom have long accused NASA of concealing the approach of a runaway planetoid).  At that time, NASA will determine whether it is likely that Apophis could strike the Earth upon its later 2036 passage, necessitating counter-measures, which would then be likely to be deployed on its intermediate 2029 passage.
The odds of Earth being destroyed by Apophis are very, very slim -- yet is it conceivable that Conan the Barbarian, H.P. Lovecraft, Stan Lee, Chris Claremont, a show based on a movie in which the villain was played by a chick with a wang, two geeky scientists, and the ancient Mayans were all wrong?  Tremble.
(But just in case someone's reading this who really doesn't know me: We'll be fine, and there's no such thing as prophecy.  Religion, mysticism, and claims of psychic abilities are for cretins.)
Posted by Todd Seavey at 7:10 AM

We'll know more after its next pass, though, which has a closest approach on January 9, 2013, not 2012 (making it have even less to do with the date for the Mayan freaks out there) from radar astronomy pinpoint it and its geometry much more precisely.

The problem is that the close approaches to Earth tweak its orbit a lot. So, you have to measure it really accurately to know the new orbit. Right now estimates wildly change - from a closest approach of a few Earth Radii to thousands of Earth Radii - for the exact same close approach event, just depending on how the asteroid happens to be *spinning*. While sort of disturbing *now* from an uncertainty point of view, that same sensitivity also suggests that intervening is probably easier..a littler nudge goes a longer way.