A Century of Change and Sheena Easton 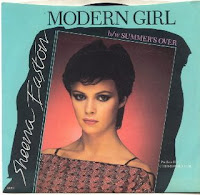 The creation of the Saudi Arabian government, World War I, the Bolshevik Revolution, the Nazi Party, and the American welfare state all lay in the future when my grandmother was born (around the same time the Panama Canal was completed in early 1914) -- and she's still here, but not all of those things are (neither is the British Empire).  Maybe someday soon none of those new-fangled things will be.  Things change quickly.  Don't let people -- right-wing or left-wing -- convince you that impermanent things are permanent, not even religion, about which some more tomorrow.

But tonight a tradition endures: socialize at Langan's from 7pm until late, at our monthly Manhattans Project gathering.  Extra libertarians are likely to join us.

Meanwhile, it seems as though many libertarians or conservatives would like to switch from talking about politics to talking about neuroscience, touched upon lately in books, blogs, comments, or articles by Ken Silber, Ryan Sager, Will Wilkinson, and the mushy and unprincipled but trend-watching David Brooks.  This may prove useful when taxes and regulation become passe in fifteen years and everything hinges on cyborg liberation.  Well see.

I must ashamedly admit that I was reminded of how quickly the culture changes by something pretty fluffy recently: stumbling across a Sheena Easton 80s video clip for the song "Modern Girl" on YouTube (this is my version of Scottish Enlightenment). It's no older than my childhood -- and wouldn't sound aesthetically out of place on the radio even today -- but the lyrics are in large part an assertion that Sheena can earn her own money and thus plan her own life, still a novel and tough-sounding stance at the time ("She don't build her world 'round no single man/ She's just gettin' by doin' what she can," etc.).

On a related note -- as foreseen by us capitalist types -- we've now reached the point where millennial females (at least in urban areas) out-earn males, and we simply do not have the political or cultural-analytical tropes on hand to say (without tumultuous repercussions) that
this may render some old anti-discrimination programs (and old aesthetic tropes and political arguments) a tad redundant. The client-serving governmental institutions are already in place, and usually are permanent...but then again, things do change, as we're saying, so I really must avoid saying "permanent"...

The left treating the NEA, labor unions, and public broadcasting as timeless necessities of civilization strikes me as a set of not-so-long-term-really historical bubbles that may pop soon. On a more pessimistic note, it is troubling the ease with which what look like "traditionalist loyalties" can be attached to things created only yesterday, from the Communist Party to "the mixed economy that created the middle class" (not to mention the new-fangled globalized U.S. military of the past half-century, as irked paleoconservatives constantly lament).

And people'll be telling me I'm a dumbass for "still" using Twitter in five years, I'll bet. But for now, I'll play along (and sometimes see people in the flesh, as at Langan's tonight).  (And some people may find it easier to post comments on this site now -- not sure.)

P.S. Speaking of rapid change, here's a piece that certainly fits into the "Jasmine Tea Party" theme I've suggested -- though where one stands on military intervention is not the best litmus test for a love of liberty, despite what some rightists, leftists, and libertarians think.  Foreign policy is complicated.  I do, however, have a suggested name for rare libertarians in favor of intervention in Libya: Libyatarians!

P.P.S. Rapid change is not the same as imaginary instantaneous "tipping points," though, like the one Thomas Friedman fears destroying the planet at some unforeseen time in precisely the next two years.
Posted by Todd Seavey at 7:54 AM