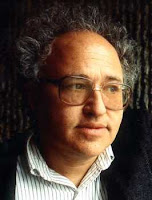 What does DAVID FRIEDMAN (son of Milton, father of Patri) have planned for the upcoming third edition of his groundbreaking anarcho-capitalist book Machinery of Freedom?
Find out when I host a speech by the man himself, this Friday, March 4 (7pm) at our old stomping grounds, Lolita Bar (266 Broome St. on Manhattan’s Lower East Side; Broome runs east-west one block south of the Delancey St. FJMZ subway stop), as a special Manhattans Project event.
With resistance to government occurring around the world from Boston to Beijing -- something I hereby declare a global “Jasmine Tea Party,” but more on that in the days ahead -- what better time to hear from the man who best explains how we could do without government altogether?  Join us -- and please spread the word!
Speaking of spreading the word, note that I’m now doing so on Twitter and Facebook, so please join me there, too.  And my thanks to Megan McClellan and to Chris Whitten of WikiTree.com, a neat site for tracking and writing about your relatives, since those two have been nice enough to put up Prof. Friedman post-speech.  (Will he be properly incentivized to treat their property as his own?)
•••
I plan to hit this Jasmine Tea Party theme of mine -- the idea that now is the time for anti-government forces the world over to make common cause, be they neocon, Muslim, or anarchist -- repeatedly in the days ahead, but is that any guarantee I won’t spend another two months blogging about romantic tribulations, you ask yourself?
Well, one reminder that this blog’s traditional themes -- political philosophy, sci-fi, scientific rationality -- do not necessarily lend themselves to blogging about women is provided by this almost verbatim, only half-joking conversation I once had with a model-beautiful female:
TODD: That's admirably rational!
FEMALE: Well, you know, I was a philosophy major.  And a science fiction fan.
TODD [almost as if joking]: Are you single?
FEMALE: No, I've got a pretty serious boyfriend.
TODD: Damn it!!
FEMALE [very calmly, amused but humble]: Yeah, I gather I'm kinda "rare."
Posted by Todd Seavey at 12:37 PM