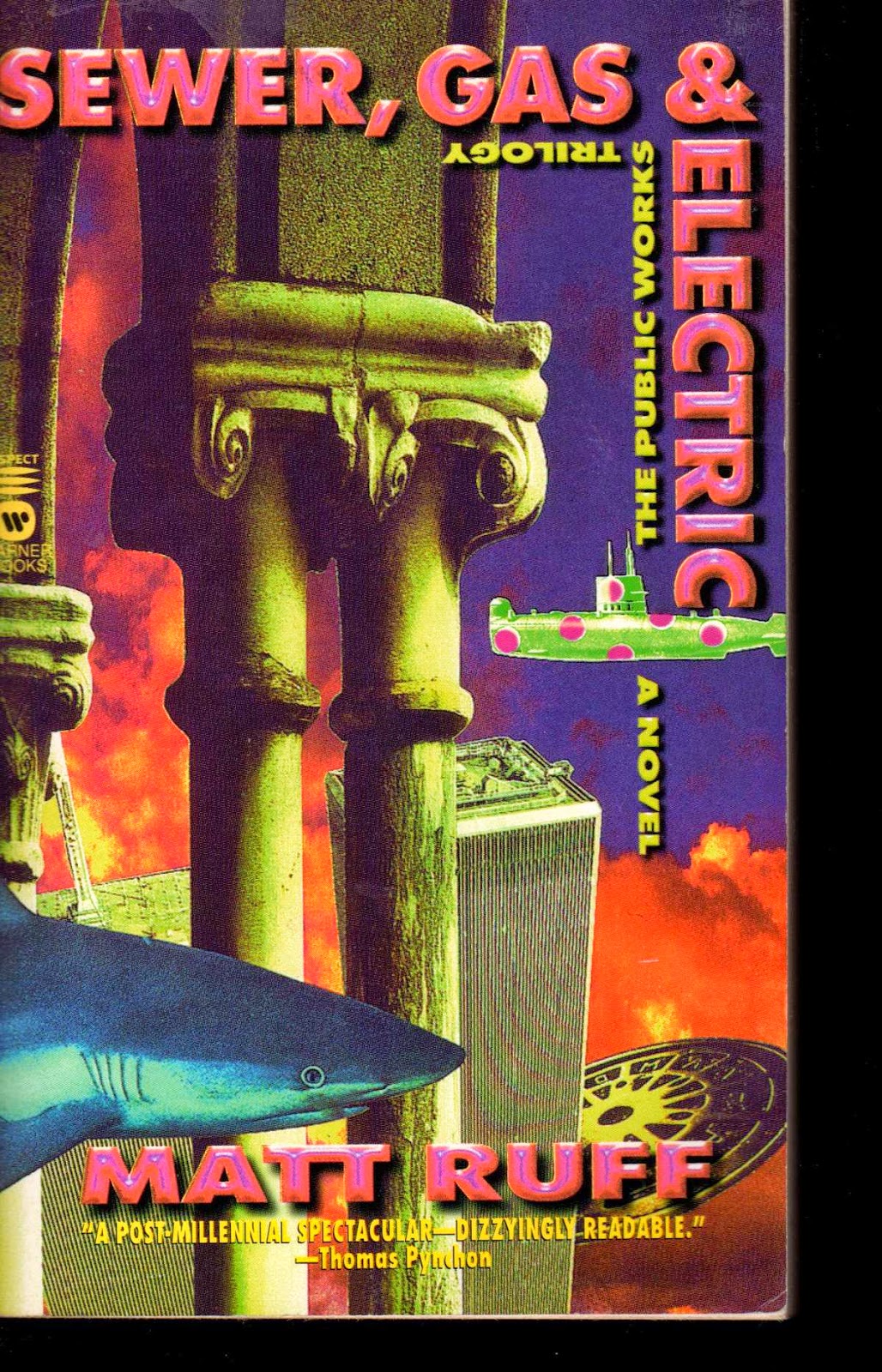 (That also happens to be when X-Men: Days of Future Past’s future is set. Observers seem to disagree when X-Men Origins: Wolverine’s finale took place -- some time between 1979 and 1987 -- but I’m starting to think Scott, Jean, and Ororo are going to have to be about fifteen years old in the next film. That’s a topic for another time, though, and may involve math.)

2. Ruff’s is that rarest of things, a widely-acclaimed (and funny) 90s postmodernist novel dedicated to Ayn Rand, pitting green, capitalist, and conservative factions against each other amidst robotics, biotech, and super-machinery that yield such wonders as a Capt. Nemo-like semi-terrorist submarine (and for Ayn Rand fans, Ragnar-like -- with allusions to Robert Anton Wilson and the Beatles, of course), plus mile-high skyscrapers, a flying shark, and a talking Ayn Rand-simulating lamp, with Star Wars and Alien references tossed in for good measure.

3. Crucially, though, the novel, as if aware of its own high-tech “First World” indulgence, is haunted by poor black people. Filled with politically-evocative moments almost as bizarre and implausible as, say, a hundred AIDS researchers and activists being shot down over Ukraine, the story takes place about a decade after a mysterious plague literally disintegrated nearly the entire black population of the world, aside from a few green-eyed survivors including the environmentalist submarine captain and his adventurous daughter (who has a robot beaver as an assistant).

Eerily, a Disney/FBI-constructed army of robot black people has filled the void left by their fleshy originals but have been reduced to a lower-than-ever social status, becoming smiling workers and lackeys -- who might just be plotting a global revolution. I suspect this novel will never be made into a film (though this does not pain me as much as the fact that libertarian-leaning Angelina Jolie never got to play Dagny in a bigger-budget version of Atlas Shrugged as once planned).

4. As a product of the “it’s funny because it’s stilted” 90s phase of postmodernism, the novel is as merciless towards marketing and corporate culture as it is towards eco-zealots, with moments such as a linguistic dispute, worthy of the business card one-upmanship in American Psycho, over whether several competing brands of toothpaste can all in some sense be “the best” without contradiction.

Like much written in the pomo/sci-fi vein in that decade, the book feels both easily-prophetic and sometimes surprisingly-dated now. It’s scary that it can feel so fresh, have been written so recently, depict a high-tech New York City so familiar to us in the twenty-first century, and yet still depict people trudging to the library for routine research instead of using the Internet. At our most ironic and self-abasing back then, we inevitably failed to acknowledge the likelihood of big advances.

5. As it happens, at the very time I was reading a novel with sympathetic eco-terrorists in it, Greenpeace did something right for a change in the real world by flying a mocking blimp over an NSA facility. That is not only very like something from a novel like Ruff’s but a beautiful trans-partisan gesture and perhaps just the thing to finally cement my attitude that radicals of all stripes should work together.

6. Speaking of blimps (which I’m increasingly inclined to think might be the mundane explanation for some of the handful of truly vexing UFO sightings stretching all the way back to the 1890s), here’s an apt spectacle for this “Month of (R)evolucion”: a massive fireworks display as seen from inside the display, thanks to a drone (I have seen few things that more viscerally reminded me we have powers and gadgets our predecessors did not).

7. There is now a revolution occurring in America that is far more slo-mo than the one we celebrated at the beginning of the month, though. With culturally-leftist zealots, especially among the young or the Salon-affiliated, getting ever angrier and harder to placate, there are probably a lot more p.c. trainwrecks ahead like this black-female vs. white-gay battle, reminiscent of transsexual activists’ recent denunciations of noted right-wingers Ru Paul and Dan Savage for using the terms “she-male” (approximately) and “tranny,” respectively.

As the accelerating Brown University-style p.c./sensitivity/privilege-checking/anti-“appropriation” mindset spirals into the abyss of madness/liberalism, you will have to start making factional diagrams just so you can keep track at home as the end nears. One can’t help thinking, though, that the left’s effort to control discourse in an increasingly diverse postmodern era (the one prophecied in books like Sewer, Gas & Electric) is as futile and counter-productive as the socialists (and the Tories of old) in effect rallying against the Industrial Revolution in the late nineteenth century.

8. Still, I think it is obvious to those who know me that I feel a certain grudging love for all political factions, really, argue though we do.

But even while loving them, intellectual honesty may require admitting that some are bullies, more interested in proving they can control or short-circuit people’s ability to speak than in making the world in any sense a happier place. Self-appointed spokespeople for the downtrodden and marginalized can still be complete assholes.

9. Part of the problem is that you don’t even know these days whether people will jump down your throat or not until learning precisely how the control freaks want you to rhetorically frame a topic, let alone which facts they demand you overlook.

I have not the slightest idea, for instance, whether feminists will be happy or angry (usually the latter’s a safe bet) if I note this article arguing that kids used to be more exploitable (for labor purposes such as farming) than they are now, which may be why people had more of them, not because pre-modern women had fewer life options than they do today (though the latter is also obviously true). Wouldn’t it be something if we lived in a world where people’s first concern was the truth and not who was about to get pissed off at them?

10. But more on taboo -- and potentially exploitation-inspiring -- ideas in an entry later this week, as I take a look at Nicholas Wade’s book A Troublesome Inheritance: Genes, Race, and Human History.
Posted by Todd Seavey at 3:00 PM