Apes, Blacks, Whites, and the Superman 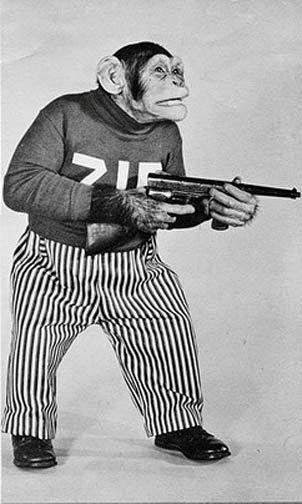 The picture nearby is not a publicity still from this week’s Dawn of the Planet of the Apes, which, as noted earlier, Gerard Perry and I discussed in this video.  (And this somewhat disturbing footage of a parrot imitating a phone conversation is not viral advertising for a remake of The Birds.) But there is no denying that special effects have changed over the past few decades, in the process altering our expectations even about basic plot elements of these sorts of films.

The animated apes in the current Apes series (which thus far has basically remade the fourth and fifth films in the original five-film sequence) can more convincingly be used to convey animal-welfare themes than could the people in monkey suits in the original series -- who were blatantly analogized to blacks in more than one line alluding to the then-recent Civil Rights struggle (ask a black sci-fi fan if you don’t believe me).

It’s somewhat embarrassing now to think that was 1960s-liberal Rod Serling’s idea of promoting compassion and equality, but they’re still great movies, their heart was in the right place, and he was still a genius. Less useful or enjoyable was Tim Burton’s terrible Apes remake of the 00s, in which ornery older apes were likened to (dumb ape) anti-welfare-state Republicans -- but it’s nice to know the Apes retain their symbolic versatility.

It’s debatable now whether the world is in as urgent need of warnings (whether clumsy or nuanced) against anti-black racism as it was back when the original Apes series came out. If Hollywood prefers to keep symbolically re-winning the Civil Rights struggle, it will be ill equipped even to broach (or grasp) a more contemporary topic like, say, Zimbabwe’s Robert Mugabe declaring that whites are now forbidden to own land in that country.

(And it’s not just Hollywood, of course: Political correctness has become so pervasive and corrosive that even among libertarians one runs the risk of being condescendingly and dismissively reminded that one is merely white, America-dwelling, and male if commenting on an international political or anthropological matter -- as happened to me just before writing this entry, in fact.)

At times, even a writer is almost tempted to call (futilely) for an end to all ambiguous symbolism in the culture, since stupidity in politics feeds on misinterpretation, reinterpretation, and, with increasing frequency, the motivated and strategic taking of offense.

P.S. On the other hand, overly strict control of highly potent symbols might just encourage more uptight interpretations of trademark and copyright law, leading to more cases like the one in which DC Comics forbid a family to use the Superman “S” in their superhero-loving dead child’s memorial. Traps lie in every direction.
Posted by Todd Seavey at 1:31 PM

Email ThisBlogThis!Share to TwitterShare to FacebookShare to Pinterest
Labels: Culture, Politics, Sci-fi and such